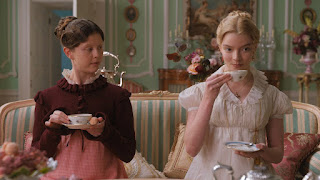 Based on the novel by Jane Austen, Emma is the story of a young woman who serves as a matchmaker for friends and such while dealing with her own whirlwind life relating to growing pains and family. Directed by Autumn de Wilde and screenplay by Eleanor Catton, the film is a comedy-drama set during the Regency-era of England in the first half of the 19th Century as a young woman tries to find her own identity through others as the titular character is played by Anya Taylor-Joy. Also starring Mia Goth, Johnny Flynn, Josh O’Connor, Callum Turner, Miranda Hart, and Bill Nighy. Emma is a ravishing and riveting film from Autumn de Wilde.

Set during the Regency-era of England, the film revolves around the activities of a young woman in the titular character of Emma Woodhouse who likes to be a matchmaker as she also copes with her own desires in life while improving the lives of others. It’s a film with a simple premise yet it explores a young woman who seems to have a lot of influence on those she meets yet often finds herself sparring with her brother-in-law’s brother in George Knightley (Johnny Flynn). The film’s script is told in the span of the year and broken into four seasons beginning with autumn and ending in the summer. It all play into Emma’s own pursuit of control and success in matchmaking as she befriends a student in Harriet Smith (Mia Goth) who lives in an orphanage of sorts as she is awaiting the identity of her father. Emma tries to get Smith to be in a relationship with the young vicar in Mr. Elton (Josh O’Connor) that doesn’t go well while she also tries to be get in a relationship for herself with her former governess’ step-son Frank Churchill (Callum Turner).

The script uses the four season structure to play into Emma’s growth as a person but also in her friendship with Smith and rivalry with Knightley although the latter also cares for Emma’s father (Bill Nighy) who copes with the idea of being alone though Emma plans not to leave him. The script also play into Emma’s relationships with others including Miss Bates (Miranda Hart) whom Emma is fond of as well as her former governess Mrs. Weston (Gemma Whelan) and her husband Mr. Weston (Rupert Graves). Notably as Emma would meet Churchill as she has to deal with the presence of Mrs. Bates’ niece Jane Fairfax (Amber Anderson) as it would create a rivalry of sorts for Churchill’s affections that would serve as a challenge to Emma who is forced to confront her own faults.

Autumn de Wilde’s direction is definitely mesmerizing in her presentation from the meticulous attention to detail in her framing as well as the way she presents this vibrant period of the times in England as it is shot on various locations in Britain with Firle Place in Sussex as the exterior of Emma’s home. The direction has de Wilde maintain this sense of atmosphere in the film as she also maintains a certain look for each season to recreate this idea of what it was like in those times. The usage of wide and medium shots add to the look of the film where de Wilde create these striking compositions that include shots of young girls wearing red robes walking in the background. There are also these shots that do look like they’re recreation of paintings while de Wilde also knows when to use close-ups as whether it’s a close-up of a face or hands as it says a lot in doing so little. It showcases the attention to detail in what de Wilde wants to capture in the way characters behave towards one another while choosing to create scenes that help play into the drama or a comedic moment.

Much of the film’s humor is low-key as de Wilde knows when to create something that is funny but it is done with much subtlety in the way Smith reacts to Mr. Elton’s portrait or the way Emma reacts to a bad situation along with her own feelings towards Mr. Knightley later in the film. The direction has de Wilde also maintain this air of tension that does start to loom in the third act with some revelations about Churchill as well as Emma losing some sense of control as she is forced to deal with her own growing pains. Still, de Wilde does find a way to flesh out the story and characters where it would allow Emma to figure things out but also do something for herself towards the end. Overall, de Wilde crafts an intoxicating and heartfelt film about a young woman who plays matchmaker for those around her while coping with her own faults and feelings about herself and everyone else.

Cinematographer Christopher Blauvelt does brilliant work with the film’s lush and colorful cinematography with its usage of natural lighting for some of the daytime exterior scenes set in sunny days to its usage of low-key lights and filters for a few scenes in the winter along with candle lights for a few nighttime interior scenes. Editor Nick Emerson does excellent work with the editing as it is largely straightforward with some rhythmic cuts to play into some of the dramatic and comedic reaction of characters. Production designer Kave Quinn, with set decorator Stella Fox and supervising art director Andrea Matheson, does amazing work with the interior look of the rooms and places that Emma and other characters go to including some of the shops and the ballroom for the ball scene at Miss Bates’ home. Costume designer Alexandra Byrne does fantastic work with the costumes as it has a lot of life from the simplest of clothing to the lavish dresses the women wear as it is a highlight of the film.

Hair/makeup designers Marese Langan, Laura Allen, and Claudia Stolze do wonderful work with the design of the hairstyles as there’s a lot of attention to detail into the hairstyles that the women have including some of the things that Emma has on her head. Special effects supervisor Neal Champion and visual effects supervisor Dillan Nicholls do terrific work with some of the film’s minimal special effects as it is largely bits of set dressing to help enhance the visuals. Sound editor Glenn Freemantle does superb work with the film’s sound as it adds to the atmosphere of the scene in capturing the natural locations along with some mixing in the way music and sparse sounds are heard in a room. The film’s music by Isobel Waller-Bridge and David Schweitzer is incredible for its mixture of orchestral music and the folk music of the time as it adds to the humor and drama with some lush string arrangements in some parts of the film while music supervisor Becky Bentham help provide the array of folk themes that were available during those times including a few originals that add to the atmosphere of the period.

The casting by Jessica Ronane is marvelous as it feature some notable small roles from Chloe Pirrie as Emma’s sister Isabella, Oliver Chris as George’s brother and Isabella’s husband John, Tanya Reynolds as a young woman in Augusta whom Mr. Elton would be with later in the film, Gemma Whelan as Emma’s former governess in Miss Taylor who becomes Mrs. Weston, Rupert Graves as Mr. Weston who does what he can to help Emma out, Amber Anderson as Miss Bates’ niece Jane Fairfax who becomes a source of competition for Emma although she is really a nice person, and Connor Swindells in a superb performance as Robert Martin as a friend of Mr. Knightley who pursues Harriet as he is someone that doesn’t have much to offer but is still a man of honor. Callum Turner is terrific as Frank Churchill as Mr. Weston’s son from his first marriage who is a charming young man that intrigues Emma though he is also quite cagey in the way he reacts towards Miss Fairfax.

Josh O’Connor is fantastic as Reverend Mr. Elton as a young vicar whom Emma tries to have him be a suitor for Harriet only he’s kind of a dimwit with other interests instead of Harriet as he would also prove to be much colder later in the film. Miranda Hart is excellent as Miss Bates as a woman who had been a lifelong family friend to Emma as she is trying to organize balls and be helpful to Emma and Harriet as it is an understated yet touching performance from Hart. Bill Nighy is brilliant as Mr. Woodhouse as Emma’s father as a man of great importance as well as being wise to the young people while lamenting over the idea of being lonely and ill since he is unable to deal with cold weather as it is a touching performance from Nighy. Johnny Flynn is amazing as Mr. George Knightley as a young man who is close with Emma’s family as he isn’t fond of Emma’s schemes and her behavior yet also is aware of her value as he also is attentive towards Harriet following Mr. Elton’s snub towards her proving he’s a good man that Emma really needs.

Mia Goth is phenomenal as Harriett Smith as a young woman who is awaiting the identity of her father as she lives in a school/orphanage where she becomes Emma’s friend while trying to find herself and her own wants in life as it is this mesmerizing and heartfelt performance from Goth. Finally, there’s Anya Taylor-Joy in a tremendous performance as the titular character as this young woman who likes to be a matchmaker and be in control of everything. Taylor-Joy brings a lot of wit and charisma to her performance but also bring up this air of naïveté as someone who doesn’t know as much as she believes as it is a career-defining performance for Taylor-Joy.

Emma is a sensational film from Autumn de Wilde that features a great leading performance from Anya Taylor-Joy as the titular character. Along with its supporting ensemble cast, ravishing visuals, its theme of love and control, a mesmerizing music score, and gorgeous locations. The film is definitely a compelling and whimsical comedy-drama that plays into the ideas of love and a young woman’s perception of it as it is faithful to the ideas and vision of its creator in Jane Austen. In the end, Emma is a phenomenal film from Autumn de Wilde.

I loved this movie so much!!

This movie really surprised a lot of people. I like it too and plan on rewatching again once things slow down a bit.

I adore Jane Austen's work so I enjoyed this adaptation, though I still have a soft spot for the Gwyneth Paltrow and Jeremy Northam version. I think Anya Taylor-Joy and Josh O’Connor are inspired casting choices though (esp. the latter as Mr. Elton), but I'm not fond of Johnny Flynn as Mr. Knightley. Still, I might rewatch it again one day, I think de Wilde's direction is very modern and distinctive.

@SEK-This was a better film than I expected it to be as I had fun watching it.

@keith71_98-I hope to re-watch it sometime soon as I just had a lot of fun watching it.

@Ruth-I really liked this film but I haven't seen the one with Gwyneth, Jeremy Northam, and Toni Collette but I was able to follow the plot easily thanks in large parts to Clueless.

So glad you enjoyed this one! I have to admit, on paper this is the kind of movie I absolutely hate, but I saw it at the cinema with a friend who was so excited, and I ended up enjoying it quite a bit.

@Often Off Topic-I now kinda wish I saw it in the cinema as I would've enjoyed seeing the locations of the film on a much bigger screen as it's just a gorgeous and fun film.