Originally Written and Posted at Epinions.com on 11/4/06, Happy Halloween. 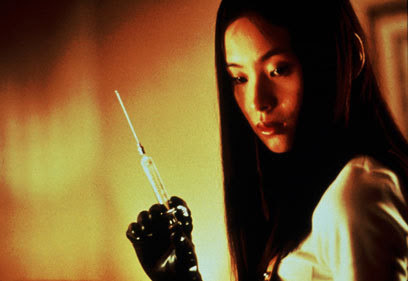 In recent years, Asian cinema has been getting more attention. Notably for the reinventing the horror genre thanks to films like Ringu, Ju-On, and Dark Water that allowed for American studios to do remakes with some successful results. While the American films introduced horror films fan to something new, serious ones went to the actual Asian horror genre to discover far more. One of the films that's considered a classic comes from noted Japanese director Takashi Miike, whose work include films like The Happiness of the Kakakuris, Ichi the Killer, and Gozu that featured controversial portrayals of sex and violence. In 1999, Miike released a film that's considered a classic in the horror genre while gaining him international film entitled Odishon (Audition).

Based on a novel by Ryu Murakami, Odishon tells the story of a middle-aged man in mourning over the death of his wife where after years of her death. Urged by his son and a film producing friend, he seeks to find a new love where he does in a young, mysterious woman who seems to carry a dark secret. Adapted into a script by Daisuke Tengen, Odishon is an eerie, provocative film that sends chills to the audience while reveling in its psychological and emotional tone. Starring Ryo Ishibashi, Tetsu Sawaki, Jun Kunimura, and Eihi Shiina. Odishon is a film that will make audiences feel creeped when you least expect it and make them to feel extremely uncomfortable.

Seven years after the death of his wife Ryoko, the middle-aged Shigeharu Aoyama (Ryo Ishibashi) is living a quiet, contemplative life with his 17-year-old son Shigehiko (Tetsu Sawaki). With Shigehiko's interest in biology, dinosaurs, and girls increasing, he urges his father that it's the time for him to remarry and find new love. Aoyama isn't sure about it since his love for Ryoko was very strong as he gets more encouragement from his friend and film producer Yoshikawa (Jun Kunimura). Reminding him that he isn't getting younger and lonelier by the minute, Yoshikawa decides to hold auditions to find a new bride for Aoyama in a mock-audition for a fake film.

After meeting Shigehiko's new girlfriend, Aoyama decides to go with the plan as he is forced to pick thirty young women out of several hundreds by reading the applications and such. It is there that one application and a picture has struck in a young, lanky woman named Asami Yamazaki (Eihi Shiina). He reads her application about how she used to do ballet for twelve years until injury ended her career and has nearly given up hope. Her despair has attracted Aoyama as the audition goes on. After auditioning nearly several women, Asami finally arrives in her quiet, shy appearance that wins over Aoyama but Yoshikawa felt he's been rubbed the wrong way for some reason. Aoyama decides to make contact where they have their first date where her reserved personality attracts him but Yoshikawa suddenly feels suspicious after trying to go over her resume and such and finding some things that don't make sense.

After breaking a promise from Yoshikawa, Aoyama decides to make contact with Asami where their conversations lead to more attraction where he decides to have a weekend devoted to her in a resort at the coast. Aoyama tells his son that he's proposing to her where Yoshikawa feels uneasy as does Aoyama's secretary. The weekend where Aoyama decides to propose to Asami becomes very strange all of a sudden as she asked to be the only person loved. Later that night, Asami disappears where things get stranger as Aoyama decides to make his own investigation into her past that involved her ballet career, and jobs working for a record company and bar. Suddenly, Aoyama finds himself caught into a trap leading to a bizarre sequence of events.

Most horror films tend to start out slowly and somewhere in the first act, kill someone and such before revealing its mystery right in the end. This film however, is pure Japanese horror where it subverts the structure and momentum. The film's first half is purely a drama where Miike and screenwriter Daisuke Tengen observe the loneliness of Aoyama and his struggle to deal with his wife's death. It starts off slow and Miike takes an observant view of how Aoyama tries to move his life. It works for the momentum of structure with the first act of Aoyama ready to move on, the second act is the beginning of his relationship with Asami, and the third being about Asami. When the film moves to the second half, it becomes bizarre where reality and fiction blur to the point of what's going on. Then, there's the film's last 20 minutes that is pure horror at its most visceral. The scene is so horrifying to watch that audiences will definitely be screaming to the screen or TV. Overall, it's one of the best horror films ever made.

Helping Miike with his surreal vision is cinematographer Hideo Yamamoto whose color schemes from the intimacy and brightness of the film's first half in Aoyama's home and his work place to the more colorful yet eerie look of the film’s second half while most of the look in the second half is a bit grainy but works to convey the atmosphere. Production designer Tatsuo Ozeki also helps create the atmosphere in the film's second half with the decaying look of the ballet studio and the home of Asami while costume designer Tomoe Kumagai creates a wonderful, thin white dress for the Asami character for the film's first half. Editor Yasushi Shimamura does a wonderful, elliptical approach to the film's editing that works to gain the momentum of the suspense. Music composer Koji Endo brings a plaintive, melancholic piano, orchestral score to the film to convey the drama but then shifts to suspenseful screeches of music to convey the film's second half.

The film's cast includes small performances from Miyuki Matsuda as Aoyama's late wife Ryoko, Toshie Negishi as the housecleaner Rie, Misato Nakamura as a house cleaner, Misato Nakamura as Shigehiko's girlfriend, and a creepy performance from Renji Ishibashi as a man in a wheelchair who works at the ballet studio. Jun Kunimura is excellent as the cautious, moralistic Yoshikawa whose suspicions about Asami are wonderfully observed as his performance is wonderful in the supporting role. Tetsu Sawaki is also great as Aoyama's son Shigehiko whose hope for his father to find romance is put to the test as he wonders about his father's melancholia and later, his obsession with Asami. Ryo Ishibashi is wonderful as the sad, desperate Aoyama whose love for his late wife is later countered by the melancholia of Asami until his character goes into full search of who she is as Ishibashi is great in the leading role. Finally, there’s Eihi Shiina as Asami, who starts off innocently and quiet in the film's first half but her best work is in the second where she reveals her dark obsessions and everything including the film's creepy third act.

While it doesn't follow the convention of traditional or Western horror films, Odishon still packs a punch into its approach of horror. The film however, for non-horror fans or traditional horror fans will have a hard time going to the film's bizarre third act along with its most terrifying scene. While the film has great performances and some great directing from Takeshi Miike, it's a film that is real touchstone to the horror genre but might be too extreme for some to the point that audiences might see it once and never again. Still, if you want a great example of what Japanese does in horror films at its most extreme and thrilling, Odishon is the film to see.