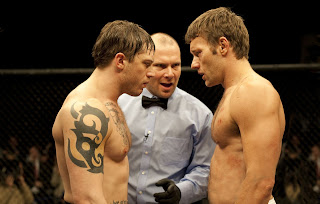 Directed by Gavin O’Connor and screenplay by O’Connor, Cliff Dorfman, and Anthony Tambakis from a story by O’Connor and Dorfman, Warrior is the story about two estranged brothers who enter a mixed-martial arts tournament for very different reasons as they also deal with their estranged father who would train one of them. The film is an exploration into the world of mixed-marital arts as well as the troubled bond between two brothers. Starring Tom Hardy, Joel Edgerton, Jennifer Morrison, Frank Grillo, and Nick Nolte. Warrior is a gripping yet exciting film from Gavin O’Connor.

The film is essentially the story of two estranged brothers who each decide to enter a MMA tournament for different reasons as they deal with their troubled relationship as well as their relationship with their father whom they had been abused by as kids. For the eldest Brendan (Joel Edgerton), it’s to make sure he doesn’t lose his house after having to mortgage it to give one of his daughters heart surgery. For the youngest Tommy (Tom Hardy), it’s a chance to help a widow of a friend he lost in the war. Then there’s their father Paddy (Nick Nolte) who is a man simply wanting to redeem himself for his actions as he wants to reconcile with both sons as he would train Tommy during the preparation for the tournament while cheering for Brendan once the tournament commences. Yet, complication ensues between the two brothers as they would eventually face each other in this tournament.

While the screenplay’s schematics is quite predictable in its second half, what makes up for it is the fact that it’s about these two brothers fighting their way to get the $5 million prize money. Both men would display very different styles of fighting in the course of the film but the obstacles they face aren’t inside a cage but outside. Brendan is worried about getting hurt as does his wife Tess (Jennifer Morrison) who knows about Brendan’s past as a UFC fighter. Brendan is also reluctant about reconciling with his father as he isn’t sure about having him near his daughters. Tommy meanwhile, is also reluctant about reconciling with his father though he only wants him as a trainer. Yet, Paddy is wondering about Tommy’s time as a Marine which would eventually lead to trouble as well as create many complications in Tommy’s troubled relationship with Paddy.

Gavin O’Connor’s direction is very engaging for the way he creates a film with two pretty different halves as the first half is essentially a family drama that concerns the two very different lives of two men. O’Connor’s direction is quite straightforward as he does employ a lot of hand-held cameras to capture the action as it would also feature montages to showcase the two different training styles of the two men. In its second half, it does become more of a typical fight movie yet O’Connor does insert some dramatic scenes to establish what these men are fighting for. Notably the first confrontation between Tommy and Brendan at a beach where O’Connor creates an amazing wide shot of the Atlantic City location. The fight scenes are quite stylish though O’Connor wisely doesn’t dwell too much into fast-cutting editing by taking his time to let the fights unfold. Notably as the climatic fight between the brothers is invested with lots of emotion and action. Overall, O’Connor creates a very dazzling yet tender film about two brothers trying to do whatever it takes to fight for something good.

Cinematographer Masanobu Takayanagi does excellent work with the film‘s vibrant cinematography that carries a bit of grain in its look where it features a stylized look of some of the nighttime exterior scenes as well as very different colored schemes for the contrasting lives of Brendan and Tommy. Editors Sean Albertson, Matt Cheese, John Gilroy, and Aaron Marshall do great work with the editing by maintaining a straightforward approach to the dramatic scenes while utilizing montages for the training scenes as well as rhythmic cuts for the fights. Production designer Dan Leigh, along with set decorator Ron von Blomberg and art director James Donahue, does terrific work with the set pieces such as the gym that Tommy goes to as well as the school that Brendan works at.

Costume designer Abigail Murray does good work with costumes as it‘s mostly casual for many of the characters in the film. Sound mixer Peter J. Devlin does superb work with the sound to capture the atmosphere of the fights in the arena as well as the more intimate moments in some of the film‘s location settings. The film’s music by Mark Isham is wonderful for its low-key yet bombastic orchestral score that underscores the drama and action that occurs while not utilizing any swelling arrangements to intensify the drama. Some of the film’s music consists of pieces by Ludwig van Beethoven as Brendan’s entrance music along with a very crucial song from the National in one of the film’s emotional moments.

The casting by Randi Hiller is brilliant for the ensemble that is created as it features some notable small performances from director Gavin O’Connor as the tournament organizer, Noah Emmerich as Brendan’s financial advisor, Kevin Dunn as Brendan’s principal, Vanessa Martinez as a widow Tommy tries to help out, Capri Thomas and Lexi Cowan as Brendan and Tess’ daughters, and Frank Grillo in a terrific performance as Brendan’s trainer Frank Campana. Other noteworthy small roles as the fighters include performances from Anthony Johnson, Nathan Marquardt, Roan Carneiro, Erik Apple, and Kurt Angle as the Russian fighter Koba. Jennifer Morrison is excellent as Brendan’s wife Tess who is worried about Brendan’s return to fighting as becomes aware of what is at stake.

Nick Nolte is incredible as Brendan and Tommy’s father Paddy who trains Tommy while wanting to re-establish contact with Brendan as he deals with his own troubled past as he’s yearning for redemption. Joel Edgerton is superb as Brendan who is determined to save his house as he goes back to fighting as he also seeks to try to make amends with his brother. Finally, there’s Tom Hardy in a marvelous performance as Tommy where Hardy displays a very quiet persona to a man who likes to keep things to himself and remain very guarded that often has him pushing people away from him.

Warrior is a remarkable film from Gavin O’Connor that features top-notch performances from Tom Hardy, Joel Edgerton, and Nick Nolte. The film is definitely a unique take on the fight movies as well as creating a captivating drama that allows the audience to root for these two men. It’s also a touching film that explores the relationship between brothers and fathers in all of its dysfunctions and more. In the end, Warrior is an amazing film from Gavin O’Connor.

I'm usually not fond of a movie about extreme contact sport but something about this movie drew me and I'm glad I saw it. Yes perhaps some of the storyline is a bit cliche but I was emotionally engaged with the characters and the family dynamics really strikes a chord with me. I already like Hardy but now I definitely want to see more of Joel Edgerton. You're right Nolte was brilliant, glad to see him nominated for Oscar for this.

Good review Steve. Definitely gets a bit melodramatic by the end, but features a huge heart because of it's three leads, especially Hardy who really knocked this role out of the park. Shame that this one didn't get a bigger response because he would have definitely gotten some sort of Oscar buzz.

@flixchatter-I was surprised by this film as It turned out to be better than I expected. I'm a sucker for these kind of sport films but it had enough strength and characters to care for that won me over.

@Dan-Tom Hardy was great in this. He definitely sold the silent persona of his character and could really kick ass.

I really liked the movie - the three main performances were fantastic and the fights were very well shot. I probably prefer the Fighter because it had a fair share of humour but Warrior was one of the better movies from last year.

@Sati-I think Warrior is the better film. The Fighter is a good film but there were a few things I didn't like about it like Melissa Leo's overblown performance.

One of my favorites from last year, definitely a very good film, with wonderful performances, especially from Nick Nolte! Great review!

@Diana-Thank you. This was a great surprise and I'm glad Nick Nolte got what I think is a deserving Oscar nod.

Great review buddy. Warrior is indeed an amazing film, one that I liked when I first saw it, and would utterly swear by now. I love absolutely everything about it. It's final scene is as devastating and beautiful as major movies can get. Wow.

@Alex-That final scene was great. Especially in the use of the National. This is why we need more movies like this. Something audiences can cheer for.