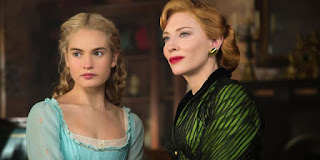 Based on the fairy tale by Charles Perrault, Cinderella is the story of a young woman whose quaint and loving world is shattered by the death of her family as she is treated cruelly by her stepmother and stepsisters until a ball is announced where she would be able to go with a little help from magic. Directed by Kenneth Branagh and screenplay by Chris Weitz, the film is a lavish interpretation of the fairytale that also features elements from the 1950 Disney animated version with Lily James in the titular role. Also starring Richard Madden, Derek Jacobi, Stellan Skarsgard, Ben Chaplin, Hayley Atwell, Holliday Grainger, Sophie McShera, Nonso Anozie, Helena Bonham Carter, and Cate Blanchett as the stepmother Lady Tremaine. Cinderella is a dazzling and heartwarming film from Kenneth Branagh.

The film is a unique take on the fairy tale about how this young woman who lived under the cruelty of her stepmother and stepsisters where she is forced to serve them until a ball is announced where she would standout and capture the heart of the prince in her land through magic and a glass slipper. It’s a story that’s been told many times yet what director Kenneth Branagh and screenwriter Chris Weitz does is provide some back story for some of the characters but also add some offbeat humor into the story. The film begins with the life of Cinderella as a child where she was known as Ella who lived in a happy home with her family and servants until the death of her mother (Hayley Atwell) and her father (Ben Chaplin) eventually remarrying years later to Lady Tremaine until he would die tragically. It would set the events of what would happen where Tremaine and her stepdaughters would treat Ella cruelly and fire all the staff forcing Ella to become their servant. For all of the cruelty she endures, Ella maintains a strong front as she made a vow to her mother to be kind and have courage.

Branagh’s direction definitely plays to a very lavish style where it is largely fantasy as opposed to elements of intense reality. Shot largely in Britain, the film is set during medieval times but from a world where there isn’t much conflict nor poverty where everything is great but not perfect. Once Lady Tremaine comes in, she represents a woman who likes to live lavishly and with excess just like her own daughters who are full of themselves and expect to be treated as elite while Ella is a woman who is generous and uses whatever she can to live or sleep on with the aid of mice. Upon meeting the Prince (Richard Madden) during a horseback ride as the Prince claims to be an apprentice, it is clear that Branagh wanted to provide more depth to these character as the Prince isn’t some typical prince but rather a young man coping with what is ahead of him. Especially as the Duke (Stellan Skarsgard) wants him to marry another princess for political reasons rather than for love.

Branagh’s approach to compositions with its wide and medium shots get a good view of the landscape as well as the world that the Prince lives in along with the lifestyle that Tremaine and her daughters crave for. Branagh would also use some medium shots and close-ups to play into the life of Ella and how she would cope with the living situations in her life as well as the cruelty she endures. Once the Fairy Godmother (Helena Bonham Carter) arrives, the film lightens up where Branagh goes for some offbeat comedy as some of it is childish but also manages to be very funny. Even in the way Branagh portrays the stepsisters as buffoons manage to be entertaining while not losing sight into the story itself. Especially the message as it plays into the idea of depth and what one must endure in a world that is often very cruel and unforgiving. Overall, Branagh crafts a fantasy film that manages to be entertaining as well as enchanting.

Cinematographer Haris Zambarkoulos does excellent work with the film‘s cinematography with the usage of lights for many of the interiors set at night as well as in the ball scene to the exteriors for scenes set at night. Editor Martin Walsh does nice work with the editing as it‘s very straightforward with some rhythmic cuts for the scenes at the ball. Production designer Dante Ferretti, with supervising art directors Gary Freeman and Leslie Tomkins and set decorator Francesca Lo Schiavo, does fantastic work with the look of home Ella lives in as it‘s quaint yet warm while the palace itself is lavish to play into the world that the Prince lives in. Costume designer Sandy Powell does brilliant work with the costumes from the dresses and gowns many of the women wear including the blue ball gown that Ella would wear at the ball.

Makeup designers Naomi Donne and Norma Webb, with hairstylists Carol Hemming, Orla Carroll, and Wakana Yoshihara, do amazing work with the look of the characters including the hairstyles of Lady Tremaine and her daughters as well as the look of the Fairy Godmother. Visual effects supervisor Huseyin Caner does terrific work with the visual effects in some of the moments of magic as well as the design of the mice that Ella talks to. Sound editor James Mather does superb work with the sound in creating effects for some of the fencing scenes in the palace as well as some low-key sounds at Ella‘s home. The film’s music by Patrick Doyle is wonderful for its lush, orchestral-based score that plays into the sense of fantasy as well as some of the moments of innocence that Ella carries throughout the film while the soundtrack also features song from the 1950 animated film.

The casting by Lucy Bevan is remarkable as it features notable small roles from Rob Brydon as a family friend in Master Phineus, Nonso Anozie as the Prince’s guard captain, Jana Perez as a princess the Duke feels the Prince should marry, Eloise Webb as the young Ella, and Derek Jacobi in a superb performance as the King who sees the conflict in his son over what to do. Ben Chaplin and Hayley Atwell are fantastic as Ella’s parents as kind-hearted people who provide the many elements that would make Ella who she is with Chaplin as the worldly father and Atwell as the very kind-hearted mother. Holliday Grainger and Sophie McShera are excellent in their respective roles as the stepsisters Anastasia and Drisella as they both provide a sense of comic relief in how untalented and dim-witted they are. Stellan Skarsgard is brilliant as the Grand Duke as the man running the kingdom where he is hoping to make some political maneuvers while conspiring with Lady Tremaine in the film’s third act.

Helena Bonham Carter is a total delight as the Fairy Godmother as this magical being who shows up to help Ella get ready for the ball as well as being someone that is just funny to watch. Richard Madden is amazing as the Prince as a young monarch who copes with the role he is about to gain while falling for Ella unaware of who she is as he deals with what to do as a prince and as a man. Cate Blanchett is incredible as Lady Tremaine as a wicked stepmother who treats Ella very cruelly while hoping that the ball would put her and her daughters out of debt and gain power in being part of the royal court where Blanchett adds a bit of restraint in her approach to humor as well as chewing the scenery. Finally, there’s Lily James in a radiant performance as the titular character as a young woman who copes with loss and cruelty while trying to raise her spirits and do what is right as well as be courageous and kind.

Cinderella is a phenomenal film from Kenneth Branagh. Armed with a great cast, gorgeous scenery, and an engaging story that manages to be faithful to its source and more. It’s a film that is also very accessible in terms of what it needed to say as well as be very entertaining. In the end, Cinderella is a splendid and majestic film from Kenneth Branagh.

Glad to hear this was good. I might be seeing it this weekend. I'm not sure. I have to check my Netflix DVD queue to see what's actually on the way to me. I'm bad about keeping up with that sometimes. Oh well, if it isn't this weekend, it'll be shortly after since I know it's near the top of the list. Looking forward to this.

I saw it on Starz! as it's been popping up on TV and it actually looked enjoyable. Plus, I got a kick out of seeing Cate Blanchett being funny and be evil.

Bah! I don't have Starz. And it's not coming just yet. Soon, I hope.

I hope you have that channel as they show some great films on those channels and some bad ones.

I missed your review of Cinderella. I LOVE this movie, glad you think it's phenomenal, I think so too. What Branagh did is amazing, he managed to make it fairy-tale-ish whilst adding some depth to the story, that's quite a feat. I like Lily James as Cinderella more than I thought, and Cate Blanchett is simply superb as the wicked stepmother.

@ruth-Cate Blanchett camping it up I think is a joy. I enjoy the fact that she'll do drama but also find time to be funny. I would love to see her do low-brow one of these days as I also got a kick in seeing the stepsisters. Lily James was delightful as I want to see her in more films. I read in fact that she and one of her co-stars in Downton Abbey (who would play the part of one of the stepsisters) actually both auditioned for the role of stepsisters but Branagh saw something in James and cast her in the lead.