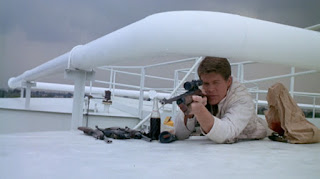 Written, edited, and directed by Peter Bogdanovich with un-credited contributions from Samuel Fuller and story by Bogdanovich and Polly Platt, Targets is the story of a young man going on a killing spree while an aging horror actor contemplates retirement just as he would encounter this troubled young man. Inspired by the shootings at the University of Texas by Charles Whitman, the film explores two different men who would meet as one of them decides to kill in reaction to the world around him. Starring Boris Karloff and Tim O’Kelly. Targets is a riveting film from Peter Bogdanovich.

The film revolves around the parallel lives of an aging horror film actor who wants to retire and a young man who goes on a killing spree as they would eventually encounter each other. It’s a film that play into two men who no longer feel like they fit in with the world as Peter Bogdanovich’s screenplay explore the diverging of these two men who would meet in its climax. The first act revolves around the actor Byron Orlok (Boris Karloff) who has become tired of making films and is eager to return to England to live in his final days despite the fact that a young filmmaker in Sammy Michaels (Peter Bogdanovich) wants to make a film with him as Orlok is also asked to make an appearance at a drive-in movie for some Q&A in a film he starred in. The first act also play into the life of a young war veteran in Bobby Thompson (Tim O’Kelly) who has become obsessed with collecting guns as he also becomes unhinged. The second act is about Orlok reluctantly accepting the Q&A gig while Thompson’s path of violence begins.

Bogdanovich’s direction does have elements of style as it play into the world of horror in not just what scared people then but the reality of what would scare people outside of film. Shot on location largely in Reseda, California and parts of Los Angeles, Bogdanovich starts the film with clips of a horror film that Orlok is in as it would appear again for the film’s climax which are really clips from The Terror that also featured a young Jack Nicholson. While the film early on has tonal issues due to the fact that these two different stories in the film, it is mainly due to the fact that Bogdanovich was working on a limited budget provided by producer Roger Corman who co-directed the clips from The Terror with other directors as he tasked Bogdanovich to make a film with the Orlok character for two days and then do whatever the hell he wanted as Bogdanovich’s usage of wide and medium shots play into Thompson’s dark obsession and his thirst to kill. Also serving as editor, Bogdanovich maintains a straightforward approach to building up the suspense with rhythmic cuts as well as how it play into Thompson as he would begin his killing spree.

Bogdanovich’s direction also play into this unexpected impact in Thompson’s killing as it would be key to the film’s second act in this act of violence that is shocking and disturbing. Yet, it also play into his lack of social awareness once he decides to kill from afar as he would clumsily leave away guns and ammo in the crime scene as he evades pursuit from the police. The film’s third act that climaxes at this drive-in movie theater where Orlok is to do a Q&A is where everything comes to ahead with Thompson hiding as he would just shoot random people with those being aware as if he’s trying to bring real horror instead of the horror that is being shown on the big screen. Bogdanovich’s approach to terror and horror help play into the sense of fear as it does feel real while it would also play into this confrontation between Orlok and Thompson about what fear does to people. Overall, Bogdanovich crafts a gripping and terrifying film about an aging horror film star and troubled young man whose diverging paths would collide to express fear in an ever-changing world.

Cinematographer Laszlo Kovacs does brilliant work with the film’s cinematography with its vibrant colors for some of the exterior shots in the film and usage of lights, shades, and shadows for some of the interior scenes at night as well as some elaborate lighting set-ups for the film’s climax. Production/costume designer Polly Platt does excellent work with the look of Orlok’s hotel suite and Thompson’s home as well as the clean-cut clothes both men wear. The special effects work of Gary Kent is terrific for the assassination scenes as it help play into the sense of terror that occurs. Sound editor Verna Fields does amazing work with the sound in the way gunfire sounds as well as the layers of sound to help in maintaining that air of suspense and terror throughout the film. The film’s music by Ronald Stein from the film The Terror is wonderful for its usage that help play into the suspense with its swell of bombastic string arrangements.

The film’s superb ensemble cast feature some notable small and appearances from future film producer/then-assistant director Frank Marshall as a ticket boy, James E. Brown and Mary Jackson as Thompson’s parents, Tanya Morgan as Thompson’s wife Ilene, Mike Farrell as a man in a phone booth, Sandy Baron as the radio dee-jay Kip Larkin, Nancy Hsueh as Orlok’s assistant Jenny, Monte Landis and Arthur Peterson as a couple of big-time film producers, and director Peter Bogdanovich as the young director Sammy Michaels who is trying to get Orlok to do one more film while they both watch a film by Howard Hawks. Tim O’Kelly is incredible as Bobby Thompson as an insurance agent/Vietnam veteran who is a quiet man that doesn’t show his troubles unless he’s carrying a gun as he starts to think about killing and seems to be in control and overjoyed when he kills someone. Finally, there’s Boris Karloff in a phenomenal performance as Byron Orlok as a horror film star who becomes tired of what he does as he’s also eager to retire while dealing with the world and what horror has become as it is a straightforward yet endearing performance from Karloff who brings a lot of gravitas to the role.

Targets is a sensational film from Peter Bogdanovich that features two incredible performances from Boris Karloff and Tim O’Kelly. Along with its striking visuals, exploration of horror in an ever-changing world, and its steady approach to suspense, the film is definitely a suspense-thriller that mixes in with a story of an old man wanting to retire as it play into the B-movies produced by Roger Corman with an element of character study. In the end, Targets is a phenomenal film from Peter Bogdanovich.

I'm such a fan of this movie in so many respects. Everything about it, from the idea of Karloff's character reaching the end of his career with such disappointment in the world around him--quitting because it has passed him by, to the prescience of having a shooter attacking crowded areas, works so well. This movie has aged extremely well, which is an uncommon thing for a thriller of this age.

@SJHoneywell-That ending with Karloff is incredible and yes, it has aged well. The thrill of someone killing people with a sniper rifle is scary. I was like "turn off the fucking light and get your ass down!" More people need to see this.

I've only seen a handful of these and clearly I need to put this one on the list.

@Jay-This film is a must though it is tonally flawed but it is influential as well as being a key film that would be a prototype for the New Hollywood movement of the 1970s.