For the 11th week of 2021 as part of Wandering Through the Shelves' Thursday Movie Picks. We go into the subject of fake identities as it has people pretending to be someone else either to hide something or to take advantage of people’s identities. Here are my three picks: 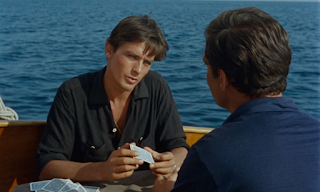 An adaptation of Patricia Highsmith’s novel that would be part of a series of novels related to the character of Tom Ripley, Rene Clement’s adaptation features a star-making performance from Alain Delon as Ripley as he tries to help a friend raise money to return to America only for things to go wrong where he takes on a new identity. It is a film rich in its imagery and setting with Delon just exuding an air of beauty and sensuality that would make him an idol for a time. Yet, the film is somewhat overshadowed by another adaptation that came out nearly 40 years later in The Talented Mr. Ripley with Matt Damon in the titular role. 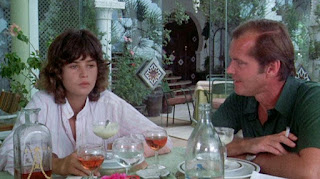 Michelangelo Antonioni’s 1975 film is a film where it wasn’t given a wide release despite being well-received from critics as it plays into a photo-journalist on assignment in North Africa as he laments over his life and career. Upon meeting a man he had met only to find him dead after an assignment, he takes on that man’s identity unaware of what he does in real life. It is a film that features a lot of the visual trademarks and themes that is expected from Antonioni yet it is Jack Nicholson as the journalist who takes on a new identity as he goes on the road with Maria Schneider through Spain makes the film a triumph and certainly one of Antonioni’s greatest films. 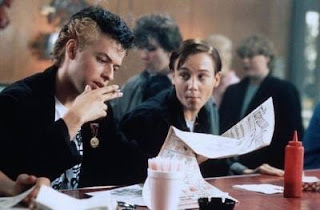 An underrated 80s film starring Jon Cryer as a stockbroker who gets into trouble with the mob as he is forced to hide out and take on an identity as a high school student as he lives with his cousin while getting a different look. It is a comedy at times but it’s also a heartfelt drama as Cryer really manages to display a lot of charm including his scenes with Annabeth Gish as it is a worthwhile film. Notably as Cryer manages to play a high school student and a bearded stockbroker really well.

We finally share a pick! Purple Noon is such a great film and unfairly ignored by most people.

I hate to say I haven't seen these yet, but I've seen Purple Moon a few times - I'm definitely going to watch it sometime. Nice post!

Interesting choices and all completely new to me. Thanks for bringing them to my attention!

I haven't seen any of your picks. It's weird for me to think of Cryer playing something dramatic because all I think of him is Two And a Half Men.

I didn't much care for The Passenger, it seemed muddled but even with that it did have its moments.

Hiding Out is silly and ridiculous but going into it I had a feeling it would be just from the posters and ads so I was prepared for that and ended up liking it for what it was.

I liked the Matt Damon Ripley version and Purple Noon as well. Even though they are the same basic story they are very different animals and each has strengths the other doesn't. Purple Noon is much more European in feeling.

I chose three that looked at the theme in slightly different ways.

This Side of the Law (1950)-Picked up on a vagrancy charge wanderer David Cummins (Kent Smith) is bailed out by lawyer Philip Cagle (Robert Douglas) because he bears a remarkable resemblance to multi-millionaire Malcolm Taylor. As it happens Taylor is about to be declared dead after having gone missing seven years hence, if David will assume Taylor’s identity and convince his estranged family-wife Evelyn (Viveca Lindfors), brother Calder (John Alvin) and sister-in-law Nadine (Janis Paige)-that he is truly the missing man Cagle will pay him five thousand dollars. What seems like easy money quickly spirals into a web of deception and murder.

The Man Who Never Was (1956)-During WWII as Britain mobilizes to invade Sicily, intelligence agent Ewen Montagu (Clifton Webb) conceives a diversionary scheme to lead Germany to believe the true target is Greece. Creating the false identity of Major William Martin for a young man with no family who recently died of pneumonia (giving the appearance of drowning) Montagu plants phony top secret documents on the body and arranges for it to wash ashore in Spain. While Hitler believes the information German undercover agent Patrick O’Reilly (Stephen Boyd) is skeptical. His suspicions risk exposing the deception.

The Great Imposter (1961)-Young Ferdinand Demara Jr. (Tony Curtis) quits high school to join the Army with hopes of becoming an officer but finds his lack of education stands in his way. His solution is to fake papers as an officer in the Marines but eventually his lie is detected. On the run he assumes the identity of a Trappist monk. In time though he again must flee and as the years pass Demara impersonates a sailor, prison warden, teacher and doctor as his journeys take him around the globe. This is based on a true story.

I haven’t seen any of your picks but I would like to see the film that the Talented Mr. Ripley is based on. Usually the original is better than the remake.

I need to see Purple Noon as Alain Delon is soooo gorgeous! I have seen The Talented Mr. Ripley but I'd imagine Delon would be electrifying in the role of Ripley.

You and Sonia are definitely selling Purple Noon to me this week! That's going on the watchlist.

Hiding Out sounds really cool, I need to watch that one!