For the 26th week of 2021 as part of Wandering Through the Shelves Thursday Movie Picks. We return to the subjects of the Oscars in the winners for Best Cinematography and Best Visual Effects as these are two categories that emphasize on the visuals. The former is based on what a camera captures and how it looks while the latter play into special effects that are created for the visuals. Here are my three picks for each respective category: 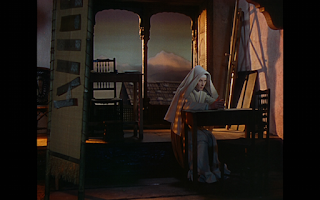 Winner of the color category at that time, Jack Cardiff’s work for the Michael Powell-Emeric Pressburger film is truly groundbreaking for its time in what can be done with the Technicolor film stock and where it could go. Yet, there’s a lushness to the colors and the attention to detail in the way it looks as its photography is unmatched with the films of the time as well as the films that would follow.

Roland Joffe’s 1986 film about a Jesuit priest’s journey to South America in the 18th Century to spread the ideas of Christianity while helping a troubled mercenary is definitely a film that plays to the idea of epics yet there’s intimacy to the story of men trying to find redemption and salvation. Chris Menges’ work is phenomenal as it has this natural tone to the way it looks in the film’s locations at the Iguazu Falls at the Amazon.

The film that finally gave Roger Deakins his over-due Oscar after being nominated many times is for one of his best work in Denis Villeneuve’s sequel to Ridley Scott’s 1982 film. Deakins’ usage of colors, filters, and lighting definitely add to the film’s futuristic tone as well as create a mood that play into the different world that Ryan Gosling’s character would venture to. It is a major reason for the film’s success as Villeneuve allowed Deakins to do so much more with this futuristic vision of what Los Angeles could be in 2049.

While much of the credit should also go to Douglas Trumbull in the creation of the many miniatures and practical/optical effects that were created for the film. The fact that this is only Oscar Stanley Kubrick ever won for is baffling since he’s known for so much more. The effects didn’t just became the standard of what could be done for science fiction but so much more as it remains astonishing.

Muren once again appears on this list but this time for James Cameron in his sequel to the 1984 film which also featured groundbreaking visual effects. This time around, it’s in the usage of computer-based effects in the creation of the T-1000 who shape-shifts into another person as he’s more dangerous than the other Terminator who also arrives to stop the T-1000 from killing John Connor. While it might feel primitive to some viewers, the work that it took to create something like that is still a standard of what visual effects could be.

Of your cinematography picks, I've only seen Blade Runner 2049. That is one gorgeous looking movie. I've seen all of your picks for Visual Effects. They all hold up amazingly well after so many years.

Deakins should've had about 4 Oscars before he run for Blade Runner 2049. So frustrating lol

Black Narcissus is a movie that I recommend to people all the time. Most people look at me and think I'm a lunatic for recommending a film about nuns in the Himalayas, but the few who listen always thank me.

Some great choices here. I haven't seen all of them but can see why you chose them, especially with that Terminator 2 clip!

Blade Runner seems to be a really popular choice this week! I agree with your picks on Special Effects as well.

I haven't seen your first two films for Best Cinematography but the others are such great picks!

We match with Black Narcissus which is such a great visual and sensual film. I do like your other choices and I chose Star Wars instead of the Empire Strikes Back.2001 is a good choice that still works today even though it’s not a favourite of mine, I want to see Bladerunner as I really like the first one. I think Terminator 2 is excellent in its effects. I think some are using CGI too much now.