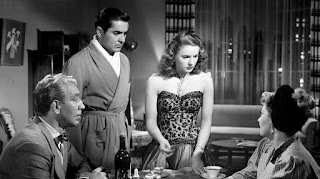 Based on the novel by William Lindsay Gresham, Nightmare Alley is the story of a small-time carny who finds himself part of a carnival where he falls for a performer as he schemes his way out of the world as well as showcase his ambitions that would lead to his downfall. Directed by Edmund Goulding and screenplay by Jules Furthman, the film is a stylish suspense-drama set in the world of the circus as it plays into a man trying to charm his way to fame and success only to embark on a nightmare of his own. Starring Tyrone Power, Joan Blondell, Coleen Gray, and Helen Walker. Nightmare Alley is a riveting and enchanting film from Edmund Goulding.

The film revolves around a carny who joins a carnival where he learns about a performance where he can know things as he falls for another performer where they create an act that gets the attention of a psychiatrist who would play into his downfall. It is a film that explores a man wanting to scheme his way into getting riches through the world of carnivals where he would play a part in helping a performer following an unfortunate event while falling for another performer whom he would help. Jules Furthman’s screenplay is straightforward in its narrative yet it is more about the schemes and journey of its protagonist Stanton “Stan” Carlisle (Tyrone Power) who is first seen as a carnival barker as he looks around where he notices an act performed by Zeena (Joan Blondell) who has the mental ability to know what is on that person’s mind as it is an act that she perfected with her alcoholic husband Pete (Ian Keith).

Stan befriends and woos Zeena but also notices that Pete is becoming unreliable where Stan would take over for Pete as he would use Zeena’s code and methods for his own show with another carnival performer in Molly (Coleen Gray). Upon taking his act with Molly to the cities and the big time, Stan becomes successful but he also gets the attention of the renowned psychiatrist in Lilith Ritter (Helen Walker) who decides to work with Stan based on recordings of her sessions as part of a bigger scheme that Molly doesn’t approve of. Even as it would play into the idea of faith and those who are ravaged in grief where the script play into the morals of trying to manipulate people with knowledge as it would play into Stan’s own downfall.

Edmund Goulding’s direction does have some style in some of the imagery and compositions that he creates from the craziness of the carnival circuits to the lavish world of the cities. Shot largely on location in California with a few bits in Chicago, Goulding creates a film that play into the contrasting world of the carnivals and the more high-class shows that Stan would play to a posh crowd. There are wide shots to play into the locations and places that the characters are where Goulding knows where to place the camera to get a look into what someone in the audience is seeing or an incident that Stan is witnessing. There are also medium shots and close-ups that play into some of the conversations including moments of Stan trying to flirt with a woman or moments that are dramatic as it play into some of the suspense in how Stan deals with his schemes and trying to manipulate people claiming he knows something about them as much of it is a guess. Goulding’s direction also play up this air of style in the way he play into presentation of the circus for some of the scenes at night such as the scene where Stan bullshits a local sheriff who was about to arrest Molly for indecent exposure.

Goulding’s direction would become stylized when Stan meets Lilith as she would take part in a scheme as a way to make money but also push Stan to his limits. Notably in a scene involving a man in a skeptic in Ezra Grindle (Taylor Holmes) following a performance where Molly is reluctantly involved as it is a key moment that begins the film’s third act. It would push the limits of what is moral and immoral as Stan is an immoral figure of sorts but even he would have his limits as he definitely found a match in Lilith who proves to be far more immoral as well as someone who is smarter than Stan in this idea of human nature. Overall, Goulding crafts an intoxicating yet eerie film about a carny who schemes is way to stardom and success only to meet his match in a devilish shrink.

Cinematographer Lee Garmes does incredible work with the film’s black-and-white cinematography with its stylish usage of shadows and light for some of the exterior scenes at night in the circus along with some vibrant lighting for the interior scenes in some of the posh shows that Stan and Molly perform at. Editor Barbara MacLean does excellent work with the editing as it is straightforward with some rhythmic cuts for some of the film’s dramatic and suspenseful moments. Art directors J. Russell Spencer and Lyle Wheeler, with set decorator Thomas Little, do amazing work with the look of the circus sets as well as the posh places and such that Stan and Molly would be in along with Lilith’s home apartment.

Costume designer Bonnie Cashin does fantastic work with the design of the costumes in the clothes that Zeena and Molly wear in their performances along with the stylish clothes of Lilith as well as the tuxedo that Stan wears in his performances. The sound work of Roger Heman Sr. and E. Clayton Ward do superb work with the sound as it play into the atmosphere of the carnivals with its crowd and such to the eerie and quiet moment during the scene where Stan tries to scheme Grindle. The film’s music by Cyril Mockridge is wonderful for its orchestral score that ranges from soaring and intense to play into the suspense as well as some somber pieces for the dramatic moments.

The film’s marvelous ensemble cast feature some notable small roles from Julia Dean as an old woman who is enchanted by Stan, James Burke as a sheriff, and Roy Roberts as a carnival owner late in the film. Ian Keith is terrific as Zeena’s alcoholic husband Pete as a man who helped perfect Zeena’s act but is burned out while Mike Mazurki is superb as Bruno as a carnival performer who is protective of everyone as he doesn’t trust Stan. Taylor Holmes is fantastic as Ezra Grindle as a posh friend of Lilith who is skeptical of Stan’s gifts while is also someone who is still dealing with his own crises of faith. Helen Walker is excellent as Lilith Ritter as a psychiatrist who is intrigued by Stan’s performances as she decides to take part in his scheme where Blondell displays a lot of charm to a woman who is truly a cunning and devious figure who is smarter than Stan.

Coleen Gray is brilliant as Molly as a young performer who joins Stan in his act while she is someone who is also a moral compass as she becomes troubled by his schemes as she felt that their act owes a lot to what Zeena has done. Joan Blondell is amazing as Zeena as a performer who has mastered the gift of manipulation in knowing people’s secrets while is also protective of her craft while lamenting over her husband’s issues. Finally, there’s Tyrone Power in a phenomenal performance as Stanton “Stan” Carlisle as a carny who is eager to make some big cash and do more as he charms his way to get what he wants as well as create the ultimate show only to later cope with guilt and the fact that he has gone too far in his schemes as it is a dark yet charismatic performance from Power in one of his career-defining performances.

Nightmare Alley is a sensational film from Edmund Goulding that features a great leading performance from Tyrone Power. Along with its ensemble cast, dazzling visuals, themes of morality and the power of knowledge to manipulate, and its sumptuous music score. It is a film noir suspense-drama that play into the fallacies of ambition as well as a man trying to manipulate those only to meet his match in someone far more immoral. In the end, Nightmare Alley is a spectacular film from Edmund Goulding.

I'm honestly kind of surprised that this got made when it did. This is as bleak as it could possibly be for the time. That ending is unbelievably dark for its time, and if there's a moment of sunlight in the last minute, it's one that is very quickly eclipsed if the movie continues.

"Mister, I was made for it" has never had so many meanings.

Nice review! I've seen this promoted on TCM so much this month. It felt like their #1 pick for October. I'll have to check it out.

This was a passion project for Ty Power. Zanuck grudgingly okayed it despite not believing in its commercial prospects since Power's films had been cash cows up to that point but once completed he dumped the film into theatres with little fanfare and pulled it quickly declaring it a bomb. The failure sent Ty back to his swashbucklers, very profitable but he soon returned to the stage for artistic satisfaction. Power however named it his favorite and time has deservedly been kind to the film and its reputation.

Atmospherically it's a beautifully done noir and the surrounding cast is great but it's really the three key players who put it over. Ty pours himself into his charlatan role, his it's most detailed performance. You can sense that he's relishing the chance to not be the great beauty for a change. He's matched by the wonderous Joan Blondell and Helen Walker. The latter in particular creates a noir villainess for the ages. Sadly it was more or less the end of the road for her career-wise. She was involved in a serious car accident shortly after filming wrapped sustaining serious injuries and that involved a fatality and lawsuits. Her career never recovered its momentum and she died at just 47. Terribly sad, she was a fascinating screen presence.

I'm interested in the new version but it has a very high bar to meet to be anywhere this film.

@SJHoneywell-This was a real surprise for me as I ended up enjoying so much more as it has me intrigued for what Guillermo del Toro will do.

@Katy-See it now! There is the del Toro version coming later in the year as I am aware it's going to be a different film but it's still worth seeing as it was quite daring for its time.

@joel65913-I do think this is a great film and more people need to see this as I do hope del Toro's version also gets younger audiences to see this version as del Toro is known for being a horror buff and a champion of older films. It's a shame that Tyrone Power's career didn't recover after this as he fucking KILLED it in that film.