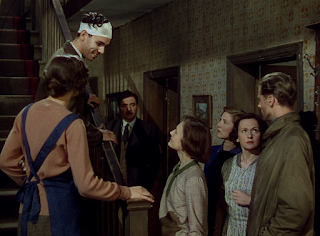 Based on the play by Noel Coward, This Happy Breed is the story of a suburban family in Britain in the course of nearly two decades as they deal with the lives after World War I and the events leading to World War II. Directed by David Lean and screenplay by Lean, Anthony Havelock-Allan, and Ronald Neame, the film is an exploration into the life of this family as they endure many changes in the course of nearly two decades including new technology and changing attitudes. Starring John Mills, Robert Newton, Celia Johnson, Kay Walsh, and Stanley Holloway. This Happy Breed is a wondrous and enchanting film from David Lean.

The film follows the life of a family from 1919 to 1939 as they live in this house during the course of these two decades amidst many social, cultural, and political changes that would affect this family in this small suburban home. It is a film that follows the life of this family in a former World War I veteran just a year after the war had ended as he moves his family to suburbia as one of his neighbors is another former soldier from the same war. The film’s screenplay is largely straightforward in exploring the life of Frank and Ethel Gibbons (Robert Newton and Celia Johnson, respectively) as well as their children in Vi (Eileen Erskine), Reg (John Blythe), and the youngest daughter Queenie (Kay Walsh), Ethel’s mother Mrs. Flint (Amy Veness), and Frank’s sister Sylvia (Alison Legatt) where they all share this small yet quaint home. Their neighbor across the street from them in Frank’s old friend Bob Mitchell (Stanley Holloway) and his son Billy (John Mills) who is a sailor that often pines for Queenie.

During the course of the film through its narrative, Frank and Ethel would endure a lot of what is happening around them as Reg befriends the socialist Sam Leadbitter (Guy Verney) who would get Reg into trouble during the General Strike of 1926 while Frank and Bob both volunteered during that strike. During the course of the film, Reg and Queenie would try to follow the trends and issues of the time with Frank preferring to stay away while Vi would settle into a family life. Reg would also get married but Queenie would rebel against her family’s ideals for something of her own as the family would deal with new things such as technology in the wireless radio, talking films, and other things as they would also witness events around them that would change Britain just before the start of World War II.

David Lean’s direction does have bits of style but much of it is intimate where a lot of the action takes place inside the Gibbons house with a few scenes set outside of the house. While there are a few wide shots in the film that include an opening and closing shot that reflects the area where the Gibbons live in with un-credited open narration by Laurence Olivier for the opening scene. Lean’s usage of medium shots and close-ups do play into a lot of the drama as many of the house interiors from the first shot of the house from the inside and the last one do make this home a major character in the film. From the dining and tea room where the characters frequent through changing times as well as listening to the wireless radio. Lean also keep things simple when it comes to shooting a conversation as there’s a lot of dialogue that is spoken that often play into the reaction of the times or wanting to be part of this new world unaware that war will be coming. The film also has elements of tragedy during a scene where everything that is being told is shown off-screen where Lean focuses more on the contents on the tea room since the audience knows what these characters are going to discover.

Lean also uses some of these historical events as a backdrop in the film as it play into how the Gibbons’ react such as the trends of the time as well as world events that would play into World War II. Notably in a few scenes involving Bob and Frank as they get drunk while discussing the future as they do become hopeful only to be concerned in the later years with Frank reacting badly to Neville Chamberlain’s trip to Munich and how the people have responded. Even as the characters get older and wiser though a few get lost in trends and such to get them disconnected with reality only to be grounded by their role in the family. Overall, Lean crafts a majestic and compelling film about the life of a family living in suburban London between the periods of two World Wars.

Cinematographer Ronald Neame does incredible work with the film’s luscious Technicolor photography as it adds a lot to the film’s visuals in the many exteriors in the daytime as well some unique lighting for some of the interiors including scenes at night. Editor Jack Harris does excellent work with the editing as it is largely straightforward but also has bits of style while also using fade-to-black to help structure certain scenes to transition from one period to another period. Art director C.P. Newman does amazing work with the look of the house and its many interiors as well as the backyard with the small garden that Frank tends to as the rooms and their evolution in the span of 20 years do add a lot to the visuals but also in helping to tell a story of this house.

Makeup artist Tony Sforzini and hair dresser Vivienne Walker do fantastic work with the look of the characters such as Frank, Ethel, Sylvia, and Bob and how they grew into older people in the coming years without doing too much makeup. The sound work of John Cook, Desmond Dew, and C.C. Stevens is superb for the way things sound outside of a house or how small sounds are presented inside the house. The film’s music by Muir Matheson is wonderful for its serene orchestral score that has some upbeat pieces but also somber bits to play into the drama as it also feature additional music from Clifton Parker and the music from those 20 years in the film.

The film’s marvelous casting feature some notable small roles from Merle Tottenham as the Gibbons’ maid Edie, Betty Fleetwood as a neighbor girl named Phyllis that Reg would marry, Guy Verney as Reg’s socialist friend Sam Leadbitter who would have feelings for Vi, John Blythe as Frank and Ethel’s son Reg as a young man who is eager to be part of the new world but also learn that he has to take the values of the old world to keep him grounded, Eileen Erskine as Frank and Ethel’s eldest daughter Vi who is just trying to find her own identity yet is someone who has a lot more respect to her parents values than her siblings, and Amy Veness as Ethel’s mother Mrs. Flint who often deals with health issues and often argues with Sylvia over trivial things. Alison Leggatt is fantastic as Frank’s sister Sylvia who often talks about many things and follows many trends where she gets into arguments with Mrs. Flint and the annoy the family with her ideas on spiritualism. Kay Walsh is excellent as Frank and Ethel’s youngest child Queenie as a young woman who rebels against her parents’ value while falling for a married man despite an offer from Billy who offers her a better life.

John Mills is brilliant as Billy as Bob’s son who is a sailor and a kind man that has feelings for Queenie despite being away at sea often as he is also someone that has a lot to offer to Queenie as well as be someone who respects Frank and Ethel. Stanley Holloway is amazing as Bob Mitchell as a former World War I soldier who lives across the street from the Gibbons’ home as he fought with Frank as the two deal with changing times but also hoping to maintain some values in the hope of a better future for their children. Celia Johnson is incredible as Ethel Gibbons as the matriarch of the family who deals with a lot of the drama in her family while maintaining the household despite some of Queenie’s actions that would hurt Ethel. Finally, there’s Robert Newton in a phenomenal performance as Frank Gibbons as a World War I veteran who is trying to start a new life in a new home with his family as he deals with changing attitudes and ideals as he tries to maintain his values while watching everything from afar.

This Happy Breed is a sensational film from David Lean. Featuring a great ensemble cast, gorgeous visuals, a sumptuous music score, and its exploration of a family’s life during a period of peace between two world wars. The film is an engaging drama with light touches that explore the dynamics of a family living in suburban London in a time when war wasn’t looming. In the end, This Happy Breed is a phenomenal film from David Lean.

I like the sound of this. It's one I haven't seen but will soon.

It was on TCM I think in January as I had it recorded on my DVR as I wasn't really expecting anything given how obscure it was. I was surprised by not just how good it was but how much I related to the older people instead of the younger people. This was a much better film than I thought it would be. Now I'm getting really close to finishing up David Lean's filmography.