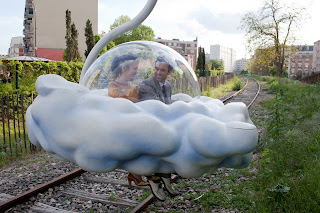 Based on the novel Froth on the Daydream by Boris Vian, L’ecume des jours (The Froth of Days or Mood Indigo) is the story of a man who meets and falls for a woman who is dealing with an unusual illness caused by a flower growing in her lungs. Directed by Michel Gondry and screenplay by Gondry and Luc Bossi, the film is a genre-bending romantic-comedy that explores a man who falls for this woman as he tries to make her happy despite her illness. Starring Romain Duris, Audrey Tautou, Gad Elmaleh, Omar Sy, Aissa Maiga, and Charlotte Le Bon. Mood Indigo is a whimsical and heartfelt film from Michel Gondry.

The film follows a rich young man who meets and falls for a woman at a party as he would marry her only to deal with an illness she gained in their honeymoon caused by a flower in one of her lungs. It is a film with a simple premise as screenwriters Michel Gondry and Luc Bossi play into the whimsical world of this rich young man in Colin (Romain Duris) who lives with his cook Nicolas (Omar Sy) and a mouse (Sacha Bourdo) in a home that is unique. Attending a party hosted by Isis (Charlotte Le Bon) where he meets his friend Chick (Gad Elmaleh) and his new girlfriend in Nicolas’ niece Alise (Aissa Maiga). It is at the party where Colin meets Chloe (Audrey Tautou) as they take part in a dance craze and then meet again where he takes her to an underground forest as they fall in love and get married. Yet, things start to take a dark turn following their honeymoon when a flower flew into her lungs as it would cause this unusual illness.

Gondry’s direction can definitely be described as style over substance in terms of its overall presentation yet there is something charming to the way Gondry depicts the life of this rich man who lives in a home where a lot of objects have a life onto their own while the doorbell often acts like a bug that gets killed over and over again. Shot on location in Belgium with areas around Paris, France, Gondry creates a world that is offbeat where it’s not just Colin’s house that has moving objects but also the world around him that includes a ride he and Chloe ride on with the help of a construction crane. There are some unique wide shots that Gondry uses to get a scope into the world these characters are in while it is also full of eccentricities such as the way people dance to Duke Ellington (August Darnell) where they’re sitting but with bigger legs that are moving for the dance. The medium shots and close-ups do help play into the interaction between characters as well as the emphasis on the latter when it comes to moving objects created by stop-motion animation.

Gondry’s direction also play into the visual vibrancy as the first half of the film has this element of joy and whimsy though it does tend to overwhelm the story at times. The film’s second half when Chloe becomes ill is where the mood changes as it slowly play into this sense of decline. The look of the film becomes less colorful while the whimsy tone of it would also darken as Colin’s home starts to become smaller and unrecognizable. Even as there is this subplot in which Chick’s obsession towards this intellectual in Jean-Sol Parte (Philippe Torreton) would be his own downfall as well as cost his relationship with Alise as it adds to the declining presentation of the film in which the cinematography becomes more desaturated and colorless. Yet, Gondry does find a way to use the visuals to tell the story despite being overwhelmed by it add to this sense of odd yet entrancing tone of a man coping with the fact that he’s about to lose the love of his life. Overall, Gondry crafts an enchanting and heartfelt film about a man who falls in love only to later deal with the love of his life dying of a mysterious illness.

Cinematographer Christophe Beaucarne does incredible work with the film’s cinematography with its usage of colors and lights to play up the sense of vibrancy to eventually going into a desaturated look and later black-and-white. Editor Marie-Charlotte Moreau does excellent work with the editing as its usage of jump-cuts and stylish cuts to help play into the humor and surreal presentation of the film. Production designer Stephane Rozenbaum and art director Pierre Renson do phenomenal work with the look of the home that Colin has as well as the rooms and some of the places the characters go to as it is a highlight of the film. Costume designer Florence Fontaine does fantastic work with the costumes as it has elements of style in the clothes the characters wear as it play into the world that the characters live in.

The special makeup effects work of Olivier Afonso, Guillaume Castagne, Nicolas Herin, Frederic Laine, and Emmanuel Pitois do terrific work with the look of the characters such as Parte in his offbeat look as well as some of the prosthetics the main characters wear in some bits. Special effects supervisor Julien Poncet de la Grave, along with visual effects supervisors Benjamin Ageorges, Stephane Bidault, Jean Louis Dousson, and Arnaud Fouquet, does amazing work with the effects from the usage of stop-motion as well as prosthetics as it is a highlight of the film. Sound editor Damien Aubry does superb work with the sound in the way objects sound as well as how music is presented on location. The film’s music by Etienne Charry is wonderful for its jazz-based score with some playful piano pieces but also some somber themes to play into the drama while music supervisor Thomas Jamois creates a music soundtrack that features an array of music from artists/acts like Boz Scaggs, Duke Ellington, Ray Shanklin, Mia Doi Todd, Loane, and Ariel Ramirez.

The casting by Marie-France Michel is marvelous as it feature some notable small roles and appearances from Michel Gondry as a doctor, August Darnell aka Kid Creole as Duke Ellington, Zinedine Soualem as a factory plant owner that rules over Colin late in the film, Alain Chabat as a cook that Nicolas watches, Natacha Regnier as a pharmacist, Sacha Bourdo as the mouse who lives in Colin’s home as he wears a mouse costume, and Philippe Torreton as the writer Jean-Sol Parte as a writer/intellectual whom Chick worships as he ends up giving his followers some awful advice on life. Charlotte Le Bon is fantastic as Isis as a friend of Colin and Chick who hosts a party and eventually has a relationship with Nicolas as she also a friend of Chloe where she expresses concern for Chloe’s health. Aissa Maiga is excellent as Alise as Nicolas’ niece who falls for Chick over their love of Parte only to feel neglected by Chick’s growing obsession as it lead her to become angry and obsessed towards stopping Parte. Gad Elmaleh is brilliant as Chick as a friend of Colin who is a fervent follower of Parte as he hopes to have a life with Alise only to become more obsessed by Parte’s ideals as he loses sight of reality.

Omar Sy is amazing as Nicolas as Colin’s cook/caretaker who runs the house as he makes great feasts and often provides a lot of help for both Colin and Chloe as he is sort of the film’s conscience where he watches Chloe in her ailing health. Audrey Tautou is incredible as Chloe as a woman who falls for Colin as she is into the world of whimsy and Duke Ellington while also becoming someone who deals with this illness as she is unable to cope with Colin struggling. Finally, there’s Romain Duris in a remarkable performance as Colin as a rich man who has it all and marrying Chloe seems to give him fulfillment until Chloe becomes ill where he struggles with his finances and the people in his life as well as the idea of losing Chloe.

Mood Indigo is a remarkable film from Michel Gondry that feature great performances from Romain Duris, Audrey Tautou, and Omar Sy. Along with its ensemble cast, dazzling visual effects, incredible art direction, and its offbeat music soundtrack. It is a film, in its 126-minute cut, that explore love though its whimsical presentation can overwhelm the story at times. In the end, Mood Indigo is a marvelous film from Michel Gondry.

Michel Gondry Films: Human Nature - Eternal Sunshine of the Spotless Mind - Dave Chappelle's Block Party - The Science of Sleep - Be Kind Rewind - Tokyo!-Interior Design - (The Thorn in the Heart) – The Green Hornet - The We & I - (Is the Man Who is Tall Happy?) – (Microbe & Gasoline)

I have never heard of this but am immediately sold.

There's 2 different versions available. I think the 94-minute version is still on TUBI as I'm not interested in seeing that but the version that I saw in 126-minutes is on MUBI. It's not a perfect film but it is still worth watching if you like Michel Gondry.

Oooh I've been wanting to see this!! I LOVE the cast: Romain Duris, Audrey Tautou, Gad Elmaleh, Omar Sy – wow, some of my fave French actors. Thanks for letting us know where to rent it too!

@ruth-Both the 94-minute version and the 126-minute version are approved by Gondry though I would much prefer the latter as I get wary about films that are shortened though I'm aware it was Gondry who supervised in the editing for the shortened U.S. version.

Good to know! I probably will watch the 126 min version, I mean it's only two hours long anyway.

@ruth-It's worth watching if you have MUBI as it's definitely become a streaming service that I love.