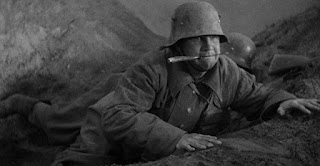 Based on the novel Vier von der Infanterie (Four Infantrymen on the Western Front) by Ernst Johanssen, Westfront 1918 is the story of four infantrymen in France trying to survive during the final months of World War I as well as the aftermath of what they’ve experienced. Directed by Georg Wilhelm Pabst and screenplay by Ladislaus Vajda, the film is among one of the first war films to contain sound as well as one of the first anti-war films as it explore the lives of four German men and how they dealt with the aftermath of war. Starring Fritz Kampers, Gustav Diessl, Hans-Joachim Moebis, and Claus Clausen. Westfront 1918 is an evocative yet harrowing film from Georg Wilhelm Pabst.

Set during the final months of World War I in France, the film revolves around a group of German infantrymen as they deal with their surroundings as their attempts to maintain their trenches begin to fail upon realization that they’re being shot at by their own artillery. It is a film with a simple premise as it follows mainly two soldiers as they deal with their situation as well as the fact that their attempts to dig new trenches are troubling considering that their superiors are the ones making mistakes. Ladislaus Vajda’s screenplay is largely straightforward as it opens with a group of German soldiers just having some coffee and food while a soldier known as the Student (Hans-Joachim Moebis) is spending time with a French peasant girl in Yvette (Jackie Monnier). Yet, they’re called back to the front as they continue to dig trenches but also deal with explosives as a burly soldier known as the Bavarian (Fritz Kampers), a veteran named Karl (Gustav Diessl), and a young lieutenant (Claus Clausen) deal with the chaos as they learn they’re being shot at by their own artillery who are unaware of what they’re firing at.

It is among these events that revolve in the first act while its second act has Karl on leave where he returns home to find that his home life isn’t going well due to what his wife (Hanna Hoessrich) has been doing though his mother (Else Helle) is happy to see him. It would play into the idea of being at home but without its sense of comfort knowing that the war still isn’t over as he would return to the front. The third act doesn’t just play into the artillery rectifying their mistake but also the fact that they made another mistake in allowing the French to advance more causing more problems as it does play into the ideas of war and its many fallacies. Even as the discussion about heroism where the Bavarian says that they would already be heroes if the war was already finished.

G.W. Pabst’s direction is definitely stylish in terms of the compositions he creates and how he presents the film as he does a lot to capture a lot in the 1:19:1 aspect ratio. Shot on location in Germany, Pabst does play into this idea of ordinary men who are just trying to be of service to their country but also want to enjoy themselves as it opens with a group of men playing music, drinking coffee, and having food while the Student is dancing with Yvette. It does give the film this sense of life away from war as Pabst shoots everything in wide and medium shots with the ratio that was used in those times while knowing when to move the camera though much of it remain still. Once the film moves into the trenches, there is this sense of urgency in which these men have to survive such as a scene where the Bavarian and Karl are both under the tunnels as they’re trying to hold on to the boards. Even as they become aware that they’re being shot by their own artillery prompting the Student to volunteer to run and reach the officers for their mistake.

There are bits of humor in the film in a scene where the Student is eating food and hiding it from others so that he wouldn’t gain the envy of other soldiers along with a scene of soldiers watching a comedy performance performed by cabaret act. Yet, Pabst would keep things straight into the second act when Karl returns home only to find things at his home that is upsetting and troubling as if he doesn’t belong at home despite the gifts he brought for both his wife and mother. There is also the fact that he is suffering from PTSD as being at home for a few days isn’t helping where Pabst definitely uses close-ups to play into the sense of terror and discomfort. The scenes in the third act where there is this battle is intense as well as horrifying as Pabst definitely has this sense of dread as well as this air of uncertainty and chaos that these soldiers have to endure. Its ending is an anti-war message as it play into the fact that no one really wins in war with those who live but don’t really survive what they had encounter. Overall, Pabst crafts a riveting yet haunting film about four Germany infantrymen trying to survive in the trenches in the final months of World War I.

Cinematographers Fritz Arno Wagner and Charles Metain do amazing work with the film’s black-and-white photography with its usage of lighting for some of nighttime exteriors at the trenches to the usage of available light for some of the scenes in the tunnel as well as some daytime exterior scenes that are largely straightforward. Editor Jean Oser does excellent work with the editing as it is largely straightforward with a few dissolves and fade to picture cut for the transitions. Art director Erno Metzner does brilliant work with the look of the house where Yvette lives as well as the apartment that Karl and his family lived but also the design of the trenches and tunnel in their decayed presentation. Sound recordist Karl Brodmerkel and sound editor W.L. Bagier Jr. do superb work with the sound in the way artillery shells fly as well as sounds of gunfire and bombs. The film’s music by Alexander Laszlo does wonderful work with the film’s orchestral score that do play into the suspense and drama with its somber string arrangements as a lot of it is low-key in its presentation.

The film’s terrific ensemble cast include some notable small roles from Vladimir Sokoloff as a purser who is trying to bring messages from the officers to low-level superiors, Carl Ballhaus as a young butcher that Karl’s wife has been spending time with, Else Helle as Karl’s mother who is happy to see him yet doesn’t say anything about what his daughter-in-law is doing, Hanna Hoessrich as Karl’s wife who has been doing things that he doesn’t approve as it would raise questions about their marriage, and Jackie Monnier as the French peasant girl Yvette whom the Student has fallen for and hopes to bring her home to Germany. Claus Clausen is fantastic as a young lieutenant who deals with trying to get his troops to advance but also fix their trenches where he deals with the lack of support from his superiors.

Hans-Joachim Moebis is excellent as the Student as a young soldier who was also a student during the war as he is in love with a French peasant girl while also volunteers to be a runner to get information to his superiors as he deals with the chaos of war. Fritz Kampers is brilliant as the Bavarian as a veteran infantryman who has been in the war longer than anyone as he is also someone who brings a lot of joy to everyone whenever they’re not fighting while is also loyal to his fellow soldiers and does what he can to help them not get killed. Finally, there’s Gustav Diessl as Karl as a soldier who is also a veteran as he is given leave to return home for a small period only to find out that things in his home are troubling as he finds himself not fitting in where he feels more at home in the battlefield with his comrades.

Westfront 1918 is a phenomenal film from Georg Wilhelm Pabst. Featuring a great cast, gorgeous visuals, somber music score, and its exploration of war and the effects on soldiers. It is a war film that does explore life in the trenches as well as men dealing with things that do provide this anti-war message as it play into the many fallacies of war. In the end, Westfront 1918 is a sensational film from Georg Wilhlem Pabst.

I've never heard of this one. I'm interested just because I haven't seen as many films around WWI as WWII.

@Brittani-This film as well as All Quiet on the Western Front (which was released in the same year) and Paths of Glory by Stanley Kubrick are considered the best World War I films though the latter is really an anti-war film.