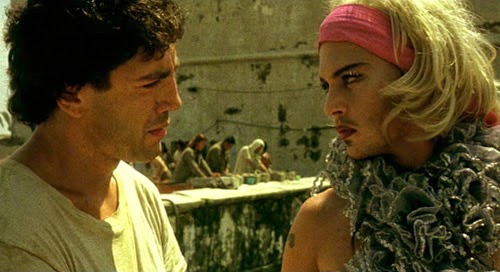 Based on Reinaldo Arenas’ biography, Before Night Falls is the story about the life of the Cuban poet/novelist who was openly gay at a time when the political situation in Cuba was tense as homosexuality was considered very taboo. Directed by Julian Schnabel and screenplay by Schnabel, Cunningham O’Keefe, and Lazaro Gomez Carriles, the film is an exploration on the life of a man who would have a profound view of the world as he would write his experiences in and out of Cuba through his work as he is played by Javier Bardem. Also starring Olivier Martinez, Hector Babenco, Andrea Di Stefano, Santiago Magill, Michael Wincott, Sean Penn, and Johnny Depp. Before Night Falls is a ravishing and mesmerizing film from Julian Schnabel.

The film explores the life and works of Reinaldo Arenas through key periods in his life from coming of age during the Cuban Revolution to being a dissident over his homosexuality which would lead to his exile on the Mariel Boatlift of 1980. Told largely through Arenas’ own work and his poetry, the film showcases the events that would drive Arenas to write as well as his encounters with people and political situations that would inspire him. The film is told in different parts of his life from his childhood and desire to join the Revolution in its final days as well as key events that would get him attention for his writing as well as controversy as the Cuban government believe his writing his counter-revolutionary. The film’s screenplay plays into these events including a time during the 1970s were Arenas would become a fugitive over accusations of child molestation as he would be in prison which would inspire to write his most famous novel.

The script also plays into Arenas’ encounters with men that would drive his homosexuality as well as meet the film’s co-writer Lazaro Gomez Carriles (Olivier Martinez) who would be Arenas’ partner in Arenas’ final years. The use of voice-over narration plays into a reflective tone in Arenas’ view of his life in those times while his poetry and text from his own novels would add to the narration. Much of it would play into Arenas’ growing awareness of his homosexuality where it was very taboo during the early years of the Fidel Castro-led regime in Cuba. Even as homosexuality was seen as subversive with ideas of capitalism which was frowned upon though Arenas would counter those claims as false. By the time the film reaches its third act, it does become less reflective where Arenas adjust to his new life but also in the illness that would eventually claim his life.

Julian Schnabel’s direction is very stylish for the way he presents the film with not just some unique camera angles but also with evocative images that play into a sense of visual poetry that is in line with Arenas’ words. Though the film is shot largely on location in Mexico as Cuba, it does feel like a place that was once idyllic in its landscapes in the woods and old cities that were once full of life. Even amidst this sense of political chaos that would surround Arenas as Schanbel uses old footage of Cuba during its Revolution and at a time when Castro came into power. Schnabel definitely aims for this mix of cinema verite and stylish camera work to play into Arenas’ life from his time in the beach with his gay friends where they would hustle as well as Arenas in his surroundings in the forest where crane shots and all sorts of things are used to play into the beauty of those locations.

The direction also plays into these moments where Arenas talks about how to identify gays in 1960s Cuba as well as endure attempts to get his work published outside of Cuba as his writing succumbs to censorship. Especially as he is misidentified as a child molester in the mid-1970s by a couple of youths who had stolen his things. There are intimate moments that play into Arenas’ stay in prison such as the isolation cell he is in as it’s mixed with elements of fantasy and reality to play into what he is thinking about. Once the film arrives in New York City, it sorts of starts off as a documentary film until the drama into Arenas’ ailing health starts to arrive where the film does return to a more reflective tone as it plays into Arenas’ sense of longing for Cuba and the similarities it had in the way he looks at New York City. Overall, Schnabel crafts a very intoxicating and rapturous film about the life of a gay yet brave writer.

Cinematographers Xavier Perez Grobet and Guillermo Rosas do brilliant work with the film‘s lush and colorful cinematography with its high emphasis on green and natural colors for the scenes set at the forest along with stylish lights and filters for scenes at night while using low-key lights for some of the film‘s interiors. Editor Michael Berenbaum does amazing work with the editing in its usage of jump-cuts, montages, and stock footage to play into the sense of style as well as rhythmic cuts to match the tone of Arenas‘ narration of his work. Production designer Salvador Parra, with set decorator Laurie Friedman and art director Antonio Muno-Hierro, does fantastic work with the set pieces from the look of some of the interior buildings including the interrogation room that Arenas would be in as well as the apartment he would have in New York City. Costume designer Maria Estela Fernandez does excellent work with the costumes from the clothes that were worn in the 1960s including the stuff gay men wore as well as the tight pants and stylish shirts of the 70s they would wear to get themselves out of Cuba.

Makeup designer Ana Lozano does nice work with the look of Arenas throughout the years including his ailing look in the late 1980s where he loses bits of his hair and color in his face. Visual effects supervisor Randall Balsmeyer does terrific work with some of the film‘s minimal visual effects which is often served as set-dressing for the scenes in Cuba as well as the opening shot of the scene in New York City. Sound editor Robert Hein does superb work with the sound from the way some of the music on location is played along with the prison scenes as well as the intimate moments in New York City. The film’s music by Carter Burwell is phenomenal for its soaring and lush orchestral music to play into the drama while its soundtrack that is assembled by music supervisors Susan Jacobs and Olatz Lopez Garmendia features some original score pieces by Lou Reed and Laurie Anderson plus an array of Cuban music and some ambient-based score music by Popol Vuh.

The casting by Monica Nordhaus is incredible as it includes notable small roles from Olatz Lopez Garmendia as Arenas’ mother, Pedro Armendiaz Jr. as Arenas’ grandfather, Vito Maria Schnabel as the teenage Arenas, Diego Luna as a friend of the young Arenas, Sean Penn as a farmer who would accompany the teenage Arenas to a town where Castro and his rebels were, Francisco Gattorno and Marisol Padilla Sanchez as a couple of publishers who would bring Arenas’ writing to Europe, Michael Wincott as a mentor of Arenas who would encourage him to write, Najwa Nimri as the mentor’s wife, and Hector Babenco in a terrific performance as Virgillo Pinera who would help broaden Arenas’ view on literature by giving him books by great authors in order to become a better writer. Andrea di Stefano is excellent as one of Arenas’ early lovers Pepe Malas while Santiago Magill is superb as another of Arenas’ gay friends in Tomas Diego.

Johnny Depp is brilliant in a dual role as a prison drag queen named Bon Bon who would help try to get Arenas out of prison while being a far more sinister character in Lt. Victor in a chilling interrogation scene. Olivier Martinez is fantastic as Lazaro Gomez Carriles whom Arenas would meet at one point in the 1960s only to reconnect with him in the 1970s where Carriles aspires to be a writer and later becomes Arenas’ partner and caretaker. Finally, there’s Javier Bardem in a tremendous performance as Reinaldo Arenas as this very gifted poet who sees the world around him as he creates poems and novels to express his feelings while coping with the Castro regime as it’s a performance full of charm and humor but also a melancholia as it’s one of Bardem’s great performances.

Before Night Falls is a remarkable film from Julian Schnabel that features a truly sensational performance from Javier Bardem. The film isn’t just a unique portrait into one of the most captivating writers of the 20th Century but also a look into a man trying to maintain his identity in a troubled and complicated world. In the end, Before Night Falls is an outstanding film Julian Schnabel.

Great review here. I adore this film. It's a movie that really embraces life, but, at the same time, acknowledges the pain and brutalities life can bring. This is still my favorite Bardem performance as well. He's so damn good.

Thanks. I truly love this film as I think it's one of the finest films about writers and artists as Bardem was in top form.

I love Bardem here, but I can't really love the film, which feels uneven and kind of messy to me.

@Fisti-I disagree since I feel like it's a film that defies the conventions of bio-pics by not delving into every sense of detail but rather play into the moments of Arenas' life and what drove his art.

Wow another film I really should check out that somehow I haven't heard of. I almost didn't recognize Johnny Depp in that photo.

@ruth-Well, I am doing a piece on Julian Schnabel in a few months as he is a filmmaker I liked and I felt the need to re-watch this film. It's definitely worth seeing. Especially for Johnny Depp before he became Captain Jack Sparrow.

Count me in as a big fan of this film and of Schnabel's work. Not surprisingly, he brings a painter-ly touch to his work, and this one especially which has a very textured look, like you could almost touch and feel the scenes.

This is definitely one of Bardem's best performances, which I would rank right up there with THE DANCER UPSTAIRS, which features a staggeringly brilliant performance by the actor.

@J.D. Lafrance-I love it when painters or artists embark on filmmaking where they definitely have a great eye for images as it's among the reasons why I adore Julian Schnabel's work. I also love Bardem's performance as the man is truly one of the best actors working today.