Originally Written and Posted at Epinions.com on 6/16/06 w/ Additional Edits. 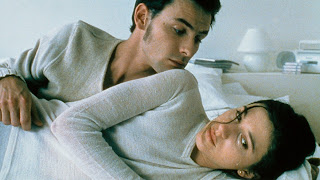 Written and directed by Breillat, Romance explores the mind of a young schoolteacher whose narcissistic, model boyfriend has been ignoring her. Unfulfilled in her sex life, she engages in a series of affairs and liaisons where in turn, she becomes degraded and beaten while wanting the attention of her own boyfriend. Pushing the sexual limits between art and pornography, Breillat chooses to explore the woman's mind by trying to find their own self in a world where men often dominate the role of gender in sex. Starring Caroline Ducey, Sagamore Stevenin, Francois Berleand, and Italian porn actor Rocco Siffredi. Romance is a disturbing yet provocative film from the often controversial Catherine Breillat.

After watching her model boyfriend Paul (Sagamore Stevenin) do his work, Marie (Caroline Ducey) is feeling distraught for the fact that Paul doesn't find her sexually attractive. She also feels troubled in her role as a woman as she wants to test her love for him by having affairs. Marie still devotes her love to Paul but he has no interest in sex as she even attempts to try and give him oral pleasure. Paul rejects her as their discussion of monogamy becomes one sided as he claims that he loves her but has no interest in sex. For Marie, sex gives her a fulfillment that love couldn't bring. She leaves her apartment for one night as she decides to go to a bar where she meets a man named Paolo (Rocco Siffredi) whom she flirts with. Particularly after they go into a discussion about monogamy.

While she still has a life as a schoolteacher for children, she finds her own love life disintegrating. Notably in one incident when she and a friend of Paul are at a club where Paul dances and flirts with other young women. She walks out of the club as she seeks the company of Paolo where she discusses her own ideas of what a penis represents and what she likes about it. They have sex which gives her some fulfillment but she wants to find more. This new life begins to affect her as her school headmaster Robert (Francois Berleand) who notices her flaws as a teacher while she convinces herself to be dyslexic. Robert takes Marie to his home where he's revealed to be a Don Juan-of-sorts with many conquests. She talks to him about his problems where he tests her in a form of sadomasochism as she is tied and gagged.

The experience becomes emotionally overwhelming where Robert stops but she wants more as he decides to make her his submissive subject for the next session. She feels fulfilled in a way that Paul couldn't as she was about to come home finding him eating dinner in a restaurant alone. She responds by having an affair with a mysterious man in retaliation so she could be the last to go home. After a successful and more fulfilling session with Robert, they go into discussion about relationships as his experienced take on things and love. There, she makes an attempt to seduce Paul yet again by attempting to give him oral pleasure and more where it seemed successful but came at a price. There, she faces a certain irony, realism, and a degradation to her own individuality.

Sexuality and power is often one-sided since if a woman engages into various sexual relations with various men, she's considered to be a slut. With this film, Breillat engages into more emotional territory where everything becomes blurry about the role of men and women in the battle of the sexes. In many ways, it's really about a woman trying to understand her role in a relationship while discovering what it takes to find real love. It's also told in the voice-over narration of Marie who is trying to understand her role and her motivations. Breillat's provocative script and observant directing reveals the world of sex as it also shows Marie's sense of self-loathing into figuring out in why Paul isn’t sexually attracted to her. There, it leads to a very disturbing scene involving a room where half of her body is given into submission with naked men ejaculating on her private area.

The sexual approach that Breillat has clearly reveals the difference in the way American and Europeans are when it comes to sex. Europeans are a bit more explicit while trying to observe more into the behaviors and motivations. Still, the film does have moments where its sexy as the sex definitely shows more, especially male genitalia, notably Rocco Siffredi where you couldn't do anything but not stare at the guy's package. It's huge. The sex obviously isn’t simulated where realism is what it does where it does more than arouse at one point while the film also tends to shock. One of its flaws in its shocking nature is where part of the film starts to degrade its protagonist but it's only to serve her journey. Still, what Breillat successful does is raise discussions about the role of women in the game of sex.

Helping Breillat in her atmospheric vision is cinematographer Yorgos Arvanitis whose lighting style creates a colorful yet bleak look of the film. Notably the apartment of Marie and Paul where it's all white while the rest of the world is more colorful as it reveals the contrast of their own emotional standpoint. Production designer Frederique Belvaux also helps in creating the atmosphere that Marie lives and the rest of Paris is where most of the film is shot entirely in Paris with other parts of France as well. Costume designer Ann Dunsford Varenne also does great work in the clothes where throughout the film, Caroline Ducey wears mostly a white skirt, white shirt, white shoes, white bra, and white panties. It's only in one scene where she wears a red dress with a black bra that leads to an event in the third act.

Editor Agnes Guillemot does some wonderful editing to create the sense of mood while knowing when not to cut in some wonderful long-shot sequences. While the film has a slow, elliptical pacing style, it works only to help the film's observant tone. Sound mixer Eric Bonnard and sound designer Paul Laine also help out with the film's atmosphere in using sounds to convey the ambient atmosphere where its only noises like a car moving or a shuffling blanket to reveal the quiet tone of the film as it focuses more on character than surroundings. Even the film's score by D.J. Valentin and Raphael Tidas doesn't play in a conventional style since their music along with a cut by George Clinton in his Funkadelic band is played at a club scene which is mostly traditional techno music.

The film's small cast that included Ashley Wanninger as a friend of Paul and Reza Habouhossein as a man who Marie meets are memorable. Rocco Siffredi makes a big impression in his role as Paolo as a man who offers her some compassion in her unfulfilled life. Francois Berleand is also great as the aging Don Juan Robert who brings the sensitivity to balance her ideas in her own exploration. Sagamore Stevenin is great in the role as the bland, insensitive Paul who disinterest in sex and in Marie brings all kinds of loathing for a character whom the audience can hate as Stevenin does a great job. The film's best performance is Caroline Ducey who brings all the complexity of self-loathing, self-exploration, and irony to her worldly performance. Using her emotions in several scenes to convey her exploration reveals the pain and loneliness she's in this relationship that is going nowhere. Ducey manages to be very strong without having to degrade herself as a person while making it clear that it's a character that she's playing.

While it's not for everyone, Romance is still a provocative and shocking feature from Catherine Breillat. While it's not as accessible as Sex is Comedy or as revered as Fat Girl, Romance is still a strong film for its uncompromising vision and confrontational approach. While the film's explicit sex and some shocking moments will disgust some, or maybe many, it's only to raise some questions about the role of sex. In the end, for a film that explores a woman’s psyche into sex, Romance is the film to see.

While I normally enjoy Catherine Breillat's films, Romance just did not grab me at all. It felt like Breillat was trying too hard to push the boundaries. The film felt very forced at times.

It's been a very long time since I've seen the film and I still have it on DVD. It's the only film of Breillat (aside from parts of "Sex is Comedy") that I've seen. I've always been interested in her. Even for someone who wants to push boundaries.

After all, with my own fictional-writing projects. I'm always interested in how sex is portrayed in film. Even in finding reasons to use as part of the story.