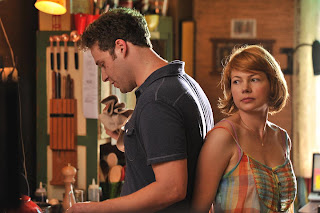 Written and directed by Sarah Polley, Take This Waltz is the story of a married freelance writer who meets a rickshaw driver/artist as she falls for him while dealing with the fact that she’s also in love with her husband. The film is an exploration into a woman trying to find herself in love as she struggles with the possibility of having relationship with this man she just met or be with the man who’s been devoted to her for five years. Starring Michelle Williams, Seth Rogen, Luke Kirby, and Sarah Silverman. Take This Waltz is an extraordinary film from Sarah Polley.

The film is about a woman named Margot (Michelle Williams) who meets this artist named Daniel (Luke Kirby) during a trip to Nova Scotia where they meet again at the airport on their way back to Toronto where they realize they’re neighbors. Yet, Margot is happily married to Lou (Seth Rogen) for five years as she finds herself attracted to Daniel where the two have some chemistry together where Margot becomes torn between the man she’s falling for and the man that she loves. What Sarah Polley creates in the story is this conflict in a woman who is in love with two different men that each have something to offer. While Lou is sort of a goofball, he’s someone that is very kind and devoted to Margot. Daniel is a more mysterious individual who is a rickshaw driver but also an artist who has this sense of unpredictability around him. For Margot, there’s this sense of confusion and conflict that she’s dealing with where she has no idea what to do as well as the outcome where she knows that one of these men will be hurt.

Polley’s direction is definitely filled with some gorgeous imagery and unique compositions where she keeps things simple while making the city of Toronto a character in the film. Yet, Polley also employs some stylish shots to play up the sense of wonderment that Margot is going through while infusing it with some humor in some scenes. There are also shots do play into Margot’s relationship with Lou and how they interact with one another while there’s also that sense of uncertainty and fantasy that plays into Margot’s attraction towards Daniel. There’s also moments where Polley isn’t afraid to shoot things like a shower scene with naked women that is a mixture of young and old to establish the idea something new will be old again. Even as the decision that Margot would eventually make would have some repercussions about what she’s doing. Overall, Polley creates a very compelling yet mesmerizing film about love and womanhood.

Cinematographer Luc Montpellier does amazing work with the film‘s colorful cinematography from the use of natural lights some of the film‘s daytime exteriors and interior scenes to more stylish uses of yellow for some scenes at night and some scenes at Daniel‘s home. Editor Christopher Donaldson does fantastic work with the editing where he utilizes a few jump-cuts for some key dramatic scenes as well as some montages in a sequence in the third act while a lot of it is very straightforward. Production designer Matthew Davies, with set decorator Steve Shewchuk and art director Aleksandra Marinkovich, does wonderful work with the sets from the more simpler look of Margot and Lou‘s home to the more arty look of Daniel‘s home.

Costume designer Lea Carlson does nice work with the costumes where it‘s mostly straightforward for the men though the clothes that Margot wear are very colorful to play up the different moods she‘s in. Sound editor Jane Tattersall does terrific work with the sound where it‘s mostly low-key in some intimate moments as well as more layered in some of the more livelier moments. The film’s music by Jonathan Goldsmith is superb for its low-key score that is mostly a mixture of ambient music with some folk arrangements while music supervisor Jody Colero creates a soundtrack that consists of folk and indie music that includes pieces from Feist, Charles Spearin, Jason Collett, the Buggles, and Leonard Cohen whose title song is the inspiration for the film’s title.

The casting by John Buchan and Jason Knight is brilliant for the ensemble that is created as it features some notable small roles from Graham Abbey as Lou’s brother-in-law, Vanessa Coelho as Lou and Margot’s niece, and Jennifer Podemski as the family friend Karen. Sarah Silverman is excellent as Lou’s recovering alcoholic sister Geraldine who is also Margot’s best friend as she is intrigued by Margot’s attraction towards Daniel. Luke Kirby is amazing as Daniel as an artist who has this quirky sensibility and charm that fascinates Margot as they have this strange chemistry that is unique. Seth Rogen is fantastic as Margot’s chef husband Lou as a man who is absolutely devoted to her while being a goofball as Rogen also displays some dramatic range in the film’s third act to reveal that there’s a lot to him which adds a sense of heartbreak to his role.

Finally, there’s Michelle Williams in a dazzling performance as Margot. Williams brings a complexity to a woman in deep conflict over the two men in her life while bringing something very different in those relationships. Williams is quite playful and comedic in her scenes with Rogen while more low-key and serious in her scenes with Kirby. Williams makes Margot a unique woman where she is bound to make a decision where she’s not afraid to be judged but also admit that it could be the wrong decision that makes her character far more engrossing to watch as it’s definitely one of Williams’ finest performances of her career.

Take This Waltz is a remarkable film from Sarah Polley that features a phenomenal performance from Michelle Williams. Along with top-notch supporting work from Seth Rogen, Luke Kirby, and Sarah Silverman. It’s a film that explores the idea of love and its complications where it’s told from the perspective of a woman without being too sappy or complicated. In the end, Take This Waltz is a riveting film from Sarah Polley.

Sarah Polley Films: Away from Her - Stories We Tell

If I remember correctly, it really divided the blogosphere, especially the ending, which kind of spells out what we should think, rather than let us think for ourselves.
Agree M Williams was terrific.
For me, Take This Waltz had a few of my favorite individual scenes of the year(the airplane, the amusement ride, and a few others)

*Spoiler warning about the ending*: For me, writer/director Polley does drive home her point about “What is new, becomes old.”, and maybe does that a few too many times. To me, feels like Polley doesn't trust the audience enough to figure this out by ourselves, so certain scenes at the end maybe are not needed.
A good movie, but things like that prevented it from becoming a masterpiece for me.
Agree it could have done more with Williams' wrongs.
If you see Polley's doc Stories We Tell (2012)and read her indiewire interview for that, Take This Waltz takes on a whole other meaning.

Yeah, I do like what Sarah Polley does as a filmmaker as I want to see Stories We Tell though I think she could've ended Take This Waltz a bit better as far as what Michelle Williams should've done not be as ambiguous.