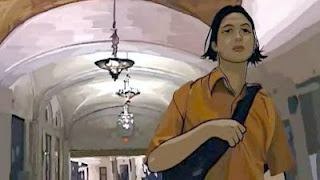 Written and directed by Richard Linklater, Waking Life is a film that explores the lives of many individuals through dreams as they discuss many topics from existentialism to dreams all told in a surreal, animated format. The film features many segments where various individuals talk about certain things as it breaks away from conventional narrative while allowing segments to flow freely as if it was told in a state of consciousness. With appearances from filmmaker Steven Soderbergh, Ethan Hawke, Julie Delpy, Kim Krizan, Nicky Katt, Wiley Wiggins, and Adam Goldberg. Waking Life is an exotic yet exhilarating film from Richard Linklater.

The film revolves around a young man (Wiley Wiggins) who would have many strange encounters in his dreams as he meets various people discussing all sorts of topics. Some of which includes existentialism where this young man goes in this weird journey that where the lives of other people are presented including the characters of Jesse (Ethan Hawke) and Celine (Julie Delpy) from the Before films where they talk about reincarnation. With comments from various people throughout the film including Steven Soderbergh sort of playing himself and Richard Linklater making an appearance. The film doesn’t have a conventional script as it’s very loose and free-form to play up the sense of a dream world where there’s no such thing as a structure. The screenplay is all based on improvisation that recalls some of Linklater’s early work as the dialogue is very talkative and rhythmic while playing up the sense of something that feels real.

The lack of a conventional script allows Linklater to create a film that plays an element of surrealism. If it was told in a live-action format, it would’ve been Linklater repeating himself like he did with his earlier work. By going into animation, he creates something that feels like a world that is dream-like and doesn’t play to anything that is based on reality. With the help of animation/art director Bob Sabiston and a team of animators including Wiley Wiggins, the film has this very strange two-dimensional hand-drawn animation style that is off-the-wall and is often moving around. Even with the use of roto-scope drawings on the actors, it does create an element of surrealism where Linklater and producer/co-cinematographer Tommy Pallotta use digital cameras to create some strange movements and compositions to set the mood of these scenes.

The direction has Linklater also taking on different styles of animation through Sabiston’s work where it has elements of water-color drawings, abstract cube art, circular drawings, and scratchy art work to play up some of the tone each segment. The direction maintains an air of unpredictability into the fact that it’s a dream world where there is no idea what’s going to happen next or how it will look. Overall, Linklater creates a sensational and mesmerizing film about dreams and humanity.

Editor Sandra Adair does brilliant work with the editing in the way it plays to the sense of unpredictability from segment to segment while it features some rhythmic cuts to play up the rhythm of the conversations. Sound designer Tom Hammond and sound editor Wayne Bell do fantastic work with the sound to create moods in the sound to match up with the visuals. The film’s music by Glover Gill is superb for its tango-based music with an orchestra that plays up some of the film’s humor as well as some of its drama.

Waking Life is a phenomenal film from Richard Linklater. With its unique approach to animation and its ability to be an experimental film that is also accessible due to its themes from philosophical to existentialism. It’s also a film that proves that animated films can be told for adults without playing to convention and just stick to bigger ideas. In the end, Waking Life is a spectacular film from Richard Linklater.

Great review. I really enjoyed this picture. What I loved best about it is that it slowly reveals it's conflict. At first I thought it was just going to be
nothing but people talking and while I did enjoy a lot of what was discussed I was getting pissed because that all there was, but once it taps into lucid dreaming
and about permanament dreamscapes. I got hooked.

I'm always glad to see Waking Life spotlighted. It's a stunning film for me and is surprisingly re-watchable. I get sucked in every time by both the concepts and visuals. The DVD included some footage of the live-action shots, and it's weird to see those moments apart from the animation. Great stuff.

@Jason Hemming-It's a film where it might not seem to draw you in because of its discussions but because of the visuals. It was able to suck you in. A true work of art.

@Dan Heaton-It's been a while since I saw the film as I hope to re-watch it soon and maybe get the DVD unless Criterion has plans to do something with that film.