The Portait of a Lady 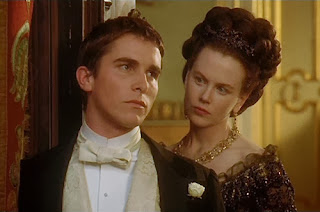 Based on the novel by Henry James, The Portrait of a Lady is the story of an American woman who travels to Europe with her inheritance to confront her destiny while meeting two American expatriates who would change her fortunes for the worse. Directed by Jane Campion and screenplay by Laura Jones, the film is an exploration of an independent woman who seeks to make something of herself only to be trapped by the world that she‘s chosen. Starring Nicole Kidman, Barbara Hershey, John Malkovich, Mary-Louise Parker, Martin Donovan, Viggo Mortensen, Christian Bale, Valentina Cervi, Richard E. Grant, Shelley Winters, Shelley Duvall, and John Gielgud. The Portrait of a Lady is an enchanting yet intoxicating film from Jane Campion.

The film is an exploration into the life of an American woman in the 1870s who craves independence and wants to explore the world as she’s been given an inheritance by her uncle. With her inheritance, Isabel Archer (Nicole Kidman) travels through Europe where she meets Madame Serena Merle (Barbara Hershey) whom she met in England some time earlier as Merle would introduce her to another American expatriate in Gilbert Osmond (John Malkovich). After rejecting several proposals from many suitors including her cousin Ralph (Martin Donovan), Isabel marries Gilbert only for the marriage to be not what it seemed as Isabel becomes concerned for the well-being of her stepdaughter Pansy (Valentina Cervi). Isabel is forced to face the destiny she’s chosen as she finds herself lost while coming to the conclusion that she’s driven away those she was close to but also couldn’t help those who really need her.

Laura Jones’ screenplay creates this very complex story as it plays into the world of Isabel Archer as the first act is about her in England as she’s approached by suitors including Lord Warburton (Richard E. Grant), Boston mill heir Casper Goodwood (Viggo Mortensen), and her cousin Ralph Touchett. They all mean well but Archer wants more as she knows that the world is changing as her friend Henrietta (Mary-Louise Parker) is already acting like a modern woman. Upon meeting Madame Merle and gaining her inheritance, Isabel is convinced that she will get the chance to live a life of great wonderment and independence where she meets Gilbert Osmond who shares her ideas about the world. Much of the first half is about Isabel’s search for herself and meeting Madame Merle and Osmond as they have plans about what to do with Isabel’s inheritance which brings a lot of suspicion from Ralph.

The film’s second half in the story is much darker where Isabel has to deal with not just the decision she made but also the people she unknowingly drove away like Ralph, Henrietta, and the suitors who still wanted her. The men would question about her happiness which Isabel chooses to dismiss them as she finds herself constrained by Gilbert’s world and what he wants as it takes a toll on her and his daughter Pansy who has fallen for a nice young man in Edward Rosier (Christian Bale) whom Gilbert dislikes. With Ralph becoming ill and Isabel realizing what she’s done, she finds herself in conflict about what to do and who to help. Even as she learns some truths about who is Pansy’s mother as well as into why Madame Merle would introduce her to Gilbert.

Jane Campion’s direction is really filled with exotic imagery and ravishing compositions in not just the way she creates the world of late 19th Century Europe but also a world that is changing where a woman like Isabel Archer seems to be part of these changes. It plays into this interesting conflict between the ideas of the Old World and New World where Campion creates a lot of scenes where it feels like the New World is emerging into the Old World and with new ideas. Even as she brings in some unique images in the way she puts the actors into a frame or how she captures a certain location like Italy and Britain where it’s starting to come in to the modern world. Even as Campion would use mirrors and glass to play into Isabel’s emotions as the world is changing where she’s oblivious to how bad things can become.

There’s also some unique visual effects sequences that Campion does that includes a montage of Archer traveling with Merle in different places of the world in surreal black-and-white images. All of which would play into the de-evolution of Archer as Campion’s presentation would become darker. Even as Campion would create slanted camera angles to play into a world that is returning to the old ways where things are becoming more complicated and constrained. Largely as the framing becomes tighter to play out the drama that is unfolding. Even as it would play into an ending where it’s not just about loss but uncertainty. Overall, Campion creates a very ethereal yet haunting film about a woman’s search for her identity in an ever-changing world.

Cinematographer Stuart Dryburgh does fantastic work with the film‘s very colorful cinematography from the use of colors for many of the film‘s first half to play out something natural in some of its exterior and interior settings to more usage of filters in a few scenes set in the winter along with some lighting schemes for the interiors including Pansy‘s cotillion party. Editor Veronika Jenet does brilliant work in the editing as she incorporates a lot of stylistic cuts from the use of dissolves and jump-cuts along with transitional fade-outs to play with its structure. Production/costume designer Janet Patterson and supervising art director Martin Childs do amazing work with the set pieces and costumes from the look of the homes the characters live in to the dresses that Isabel and other female characters wear.

Hair/makeup designer Peter King does terrific work with the hair styles that the women wear in the film along with some of facial hair that some of the men sport. Visual effects supervisor Kent Houston does nice work with some of the film‘s minimal visual effects to play up into Isabel‘s fantasies as well as her trip around the world. Sound designer Lee Smith does superb work with the sound to play into the intimacy of some of the locations and scenes as well as the parties that occur in the film. The film’s music by Wojciech Kilar is excellent for its flourishing and broad orchestral score that features sweeping string arrangements to play out the drama while its soundtrack also includes lots of classical pieces by Johann Strauss, Franz Schubert, and Johann Sebastian Bach.

The casting by Johanna Ray is incredible for the ensemble that is created as it features small yet notable appearances from Shelley Winters as Isabel’s aunt, Shelley Duvall as Gilbert’s flighty yet sympathetic sister Countess Gemini, and John Gielgud as Isabel’s uncle who would be the one to give her the inheritance. Viggo Mortensen and Richard E. Grant are terrific in their respective roles as Isabel’s suitors Caspar Goodwood and Lord Warburton where the latter is offered the chance to marry Pansy while Christian Bale is superb in a small but memorable role as Pansy’s young suitor Edward Rosier. Valentina Cervi is wonderful as Pansy whom Isabel cherishes as she’s a young woman who is confused by what she wants but to also please her father. Mary Louise-Parker is excellent as Isabel’s friend Henrietta who encourages Isabel to be independent only to realize where she ended up as she tries to help the ailing Ralph.

Martin Donovan is amazing as Isabel’s cousin Ralph who is devoted to her as he watches her be wooed by Gilbert from afar while dealing with his illness and what is happening to her. Barbara Hershey is fantastic as Madame Serena Merle as a woman who charms Isabel into confronting her destiny only to have things go too far as she realizes the damage that she caused. John Malkovich is marvelous as Gilbert Osmond as a man who marries Isabel in the hopes to become rich and powerful as he becomes controlling into ensuring what he wants and such. Finally, there’s Nicole Kidman in a tremendous performance as Isabel Archer as she goes from this independent yet ambitious woman wanting to seek new adventures in an ever-changing world only to fall prey by a couple of American expatriates who would trap her into something very dark as she tries to comprehend the decisions she’s made and who to help as Kidman brings a lot of grace and melancholia to her role.

The Portrait of a Lady is an exhilarating yet brooding film from Jane Campion that features an amazing leading performance from Nicole Kidman. Along with a great supporting cast as well as very strong themes on identity, destiny, and modernism. The film isn’t just this fascinating portrait of a woman trying to keep up and embrace the new world but also deal with the ideas of an older world that prove that some things don’t change. In the end, The Portrait of a Lady is a remarkable film from Jane Campion.

Hi Steven! I so want to see this one but it's not on Netflix nor Amazon on Demand. I don't know why it's so hard to find. Interesting to see Bale in a period drama, no doubt he's memorable even in a smaller role. He's the best thing in The New World even though he's only in for about 20 min.

I downloaded the film specifically for the upcoming Auteurs piece on Jane Campion (coming on Cinema Axis this Friday) as it was one of the few things of her work that I hadn't seen. Bale is really good in this as he looked quite young back then which is surprising by the way he look these days. I also love him in The New World though you see more of him in the expanded cut of the film.

There is an extended cut of The New World?? Boy I should order the BD, I'd think it's worth it as I adore his role as John Rolfe. Bale just doesn't play romantic roles as often as I would like but when he does, it's superb!

@ruth. There's 3 cuts of The New World. The first cut was a 150-minute Oscar cut that was released in late 2005 in NYC & LA for Oscar Consideration. Malick then decided to trim 15 minutes for the 135-minute theatrical cut for wide release in 2006. And there's the 172-minute extended cut that he released in 2008 as it's the only version that is presented on Blu-Ray. Malick is known for cutting his films to the last minute.