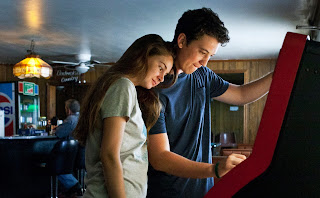 Based on the novel by Tim Tharp, The Spectacular Now is the story of a high school senior who faces reality after being dumped by his girlfriend as he meets another young woman who would change his idea about living in the now. Directed by James Ponsoldt and screenplay by Scott Neustadter and Michael H. Weber, the film is a coming-of-age story of sorts that revolves around high school life where a young man doesn‘t think about the future as he prefers to live in the now. Starring Miles Teller, Shailene Woodley, Brie Larson, Kyle Chandler, Mary Elizabeth Winstead, and Jennifer Jason Leigh. The Spectacular Now is a charming yet engaging film from James Ponsoldt.

The film is about this young man named Sutter Keely (Miles Teller) who likes to live in the now as he likes to drink and party while being cool with everyone. Yet, his longtime girlfriend Cassidy (Brie Larson) dumps him as Sutter thinks she’ll come back until he meets another schoolmate named Aimee (Shailene Woodley) who is different from other girls. There, Sutter not only finds a young woman he might want to spend his time with while she challenges him to face the real world as he doesn’t think about the future at all as he just wants to live in the moment. Even as he has to deal with who he is as well as the fact about his parents split up as he lives with his mother (Jennifer Jason Leigh).

The film’s screenplay is largely told from Sutter’s perspective as he is this guy that loves to party with the people in his school, he loves to drink despite the fact that he’s only 18, and he loves to work at a men’s clothing story where he’s also buzzed most of the times. Yet, he’s also quite flawed as he often thinks about himself and being the guy that ladies love where he would often think about Cassidy who has a new boyfriend. Even Sutter’s friend Ricky (Masam Holden) thinks that Sutter won’t do the right thing to Aimee as he knows that she’s just a really good girl who could get hurt.

Fortunately, Aimee is able to hold on to her own while she doesn’t mind taking a sip of alcohol as she has some issues at home. Still, her time with Sutter would help make some decisions of her own about her future while she would be the one to push Sutter to find out about his dad (Kyle Chandler) whom he hadn’t seen for many years. Yet, that would be a moment in the third act that would force Sutter to think about where he might go if he continues to act the way he is. Notably as he also has to get answers from his mother and his older sister Holly (Mary Elizabeth Winstead) about why they don’t talk much about his dad.

James Ponsoldt’s direction is quite straightforward as he doesn’t really go for anything that is over stylized as he just wants to keep the presentation simple. Shot in location in Athen, Georgia, Ponsoldt does manage to create some unique compositions and scenes that is filled with some humor but also some low-key drama. Ponsoldt knows how to put the camera into a frame and how to create an atmosphere in a scene where it is all about telling a story as Ponsoldt also has a few montages to play up Sutter’s own sense of misadventures where he might have no idea about what he did. Still, Ponsoldt does create some tension in some scenes such as the eventual meeting between Sutter and his dad which showcases some chilling realities that Sutter might face. Even as the third act would have Sutter face things about himself as well as how it would impact his relationship with Aimee. Overall, Ponsoldt creates a very tender yet exhilarating film about a young man dealing with a possible future with the help of a young woman.

Cinematographer Jess Hall does excellent work with the film‘s cinematography to play up the gorgeous look of the daytime scenes in Athens to some more-low key yet stylish lights for the scenes at night. Editor Darin Navarro does nice work with the editing as it‘s mostly straightforward while it has a few montages and some methodical cuts for some the dramatic-suspense that occurs. Production designer Linda Sena and set decorator Jess Royal do terrific work with the set pieces from the look of the school the characters frequent at to Aimee‘s room that displays her unique personality.

Costume designer Peggy Stamper does wonderful work with the costumes as it‘s mostly casual with the exception of the prom dresses the girls wear. Visual effects supervisor Matthew Bramante does superb work with the film‘s minimal visual effects where it plays in only one scene that is very dramatic as it‘s one that is very unexpected. Sound editor Ryan Collins does marvelous work with the sound to play up the atmosphere of the parties as well as some of the smaller moments in the film. The film’s music by Rob Simonsen is fantastic for its low-key score that is a mixture of indie and ambient music while music supervisors Gabe Hilfer and Season Kent create a fun soundtrack that is a mix of country, hip-hop, electronic dance music, and indie music.

The casting by Angela Demo and Barbara J. McCarthy is brilliant for the ensemble that is featured as it includes some notable performances from Masam Holden as Sutter’s friend Ricky, Andre Royo as Sutter’s math teacher who is concerned about his future, Dayo Okeniyi as Cassidy’s new boyfriend who feels threatened by Sutter’s presence, Kaitlyn Dever as Aimee’s concerned friend Krystal, and Bob Odenkirk in a terrific standout performance as Sutter’s boss who appreciates Sutter’s help but has concerns for his well-being. Mary Elizabeth Winstead is excellent in a small role as Sutter’s holder sister Holly who becomes concerned about Sutter’s questions in relation to their father where she eventually gives him an answer. Brie Larson is wonderful as Sutter’s ex-girlfriend Cassidy who has a hard time trying to move on while revealing her frustrations towards Sutter.

Kyle Chandler is superb as Sutter and Holly’s estranged father Tommy who seems like a nice guy but reveals a lot of flaws that would eventually make Sutter realize what he might become. Jennifer Jason Leigh is amazing in a small yet crucial role as Sutter and Holly’s mom Sara who is concerned with Sutter’s life and behavior while being very cagey about his father as she does have this great scene where she talks to her son about why she hid the truth.

Finally, there’s the duo of Shailene Woodley and Miles Teller in remarkable performances in their respective roles as Aimee and Sutter. Woodley brings some wit and energy to her role as a young woman who is an outsider but also someone that is very engaging as Woodley makes Aimee a very unique character. Teller adds a sense of charm to the role of Sutter as someone who seems un-likeable for his lack of ambition and such but makes up for it by playing it cool while later dealing with his flaws. Teller and Woodley make a great pair in the way they interact as well as bring some realism to the situations they encounter.

The Spectacular Now is a phenomenal film from James Ponsoldt that features riveting performances from Miles Teller and Shailene Woodley. The film isn’t just a tender yet engrossing coming-of-age film but also one that explores the world of youth and how they try to live in the now unaware that there’s a whole world ahead of them as it’s told by a lost young man. In the end, The Spectacular Now is a sensational film from James Ponsoldt.

Nice review Steve. Didn't think this was as amazing as most people have been saying it is, however, I do feel like this was a great coming-of-age flick that all teens should see. Not just because it shows a young, blissful relationship filled with love and care, but because it shows what can happen to your future if you don't pay enough attention to it. Something I think all teens need to see.

I think it's a film that is better than what I expected to be as well as the fact that it seemed a bit more realistic in comparison to most teen films.

A sensational film indeed. The two leads really floored me in this. And Chandler... man, that guy can do so much with so little.

@Alex Withrow-Totally. I like seeing Chandler in pretty much anything. The dude is so charming despite the fact that his character is a dick.