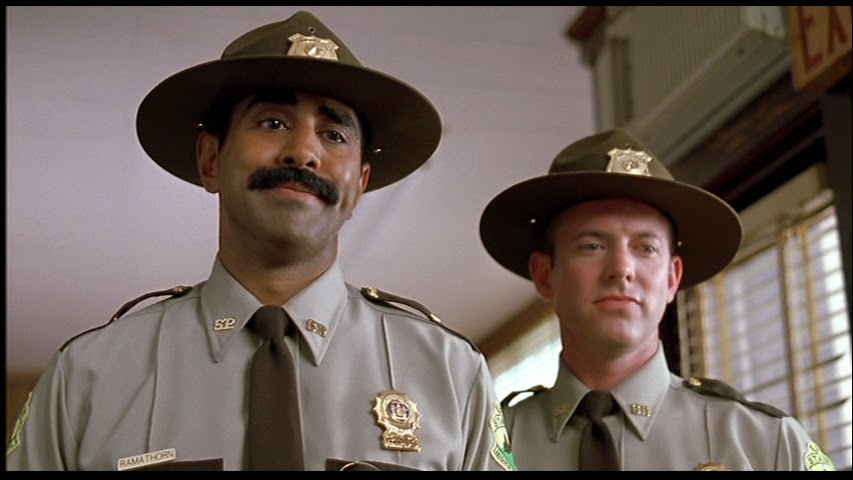 Written and starring the Broken Lizard comedy troupe that consists of Jay Chandrasekhar, Kevin Heffernan, Steve Lemme, Paul Soter, and Erik Stolhanske and directed by Chandrasekhar, Super Troopers is the story of a group of state troopers who try to uncover a drug ring as they’re in danger of being shut down in favor of a more competent state police department whom they despise. The film is an ensemble comedy that features a lot of shenanigans and a bunch of guys trying to keep their jobs while dealing with all sorts of crazy shit. Also starring Marisa Coughlan, Daniel von Bargen, and Brian Cox. Super Troopers is a witty yet very entertaining film from the Broken Lizard team.

Set in Vermont near the U.S.-Canadian border, the film revolves a group of misfit state troopers who find themselves in danger of being shut down until they find some mysterious drugs as it relates a series of mysterious deaths and discoveries while they deal with the rival state police department. It’s a film that doesn’t require much plot but rather characters and situations as the Broken Lizard team create a film where there’s a bunch of guys trying to do their job but also have some fun in the process. Some of which involve shenanigans in the way they conduct their business such as busting young potheads or do small jokes while stopping people for speeding and such. Yet, the guys find themselves in trouble as the state police department are not only getting their work done but also gain the favor of the local government who wants to shut the state troopers down.

The film’s screenplay creates these characters who are all quite interesting as well as provide much of the film’s brash but also engaging humor. Leading the pack is the second-in-command Thorny (Jay Chandrasekhar) who is the most responsible person of the gang as he also has a kid named Arlo (Christian Albrizio) with his hippie girlfriend Bobbi (Amy de Lucia). The rookie Rabbit (Erik Stolhanske) is someone who is very good at his job while also likes to have fun while enduring some hazing as well as some pranks. The nice-guy Jeff Foster (Paul Soter) and extreme wild-man Mac (Steve Lemme) are known for their pranks with Foster having a crush on police dispatcher Ursula (Marisa Coughlan) while Mac likes to do crazy shit. Then there’s Farva (Kevin Heffernan) who is the troopers dispatcher after being demoted for his behavior as he is treated with less respect by his fellow officers and their superior Captain O’Hagan (Brian Cox).

Yet, they all have foes in the state police led by Captain Grady (Daniel von Bargen) who often gets in their way to do the job as he and O’Hagan battle it out over who can do their job better. Especially when it comes to this drug bust involving marijuana and a dead body in a RV where the troopers try to do a valid investigation and get the job done so they can save their jobs. Still, there are complications as it relates to the personal lives of the troopers as Jeff’s relationship with Ursula has its own problems considering that they’re working for different teams though Ursula is much friendlier towards the troopers as she is trying to get into the field with the other cops. Even as she would play a crucial role in the investigation as it leads to the film’s climax.

Jay Chandrasekhar’s direction is quite straightforward in terms of the compositions he creates while knows how to film comedic moments with such ease. Yet, he starts the film with this very silly and off-the-wall scene where Thorny and Rabbit stop a trio of stoners into a game only to be involved in a high-speed chase with Mac as the driver. It sets the tone for what is to come in terms of its humor where it is quite racy but also full of fun. Much of the film is shot in upstate New York to play into that world of American northeast while there’s a lot of joke that are involved in some unique wide and medium shots. Even in scenes where can be quite crude yet maintain something that isn’t too out there as Chandrasekhar knows that it has to say something to tell the story. Overall, Chandrasekhar and the Broken Lizards troupe create a very smart and very offbeat comedy about a bunch of state troopers doing their jobs and have fun.

Cinematographer Joacquin Baca-Asay is excellent as it is quite straightforward for much of its interior and exterior locations with some unique lighting for some of the scenes set at night. Editors Jay Chandrasekhar, Kevin Heffernan, and Jacob Craycroft do terrific work in the editing as it‘s straightforward while emphasizing on some style like jump-cuts and some inventive montages such as Farva getting drunk at a party. Production designer Ben Conable, with set decorator Jocelyn Mason and art director Johnny Hardesty, does nice work with the set pieces from the trooper station as well as the restaurant where the gang eats as well as the design of the reefer bags with the Johnny Chimpo logo.

Costume designer Melissa Bruning does wonderful work with the costumes as it‘s mostly casual with the exception of the uniforms the state troopers and police wear. Sound editors Frederick Helm and John Salk do superb work with the sound in terms of the sound effects and the way the sirens sound. Music supervisors Barry Cole and Christopher Covert does fantastic work with the soundtrack as it features this mix of rockabilly, electronic music, and kitsch with some upbeat score pieces from the Southern rock band .38 Special that adds to the film’s offbeat humor.

The casting by Jennifer McNamara is amazing as it features some cameo appearances from Lynda Carter as the state governor, John Bedford Lloyd as the town mayor, Charlie Finn as a fast-food cashier, Jim Gaffigan as a driver Mac and Foster stopped, Jimmy Noonan as a mysterious trucker named Galikanokus, Christian Albrizio as Thorny and Bobbi’s son Arlo, Amy de Lucia as Thorny’s hippie girlfriend Bobbi, and Blanchard Ryan as a woman on a billboard that Mac whacks off to. Andre Vippolis, Joey Kern, and Geoffrey Arend are hilarious as a trio of stoners who gets arrested with Arend being the funniest while Philippe Brenninkmeyer and Maria Tornberg are terrific as a German couple Thorny and Rabbit stop as the latter seduces Rabbit on the job. Dan Fey and Michael Weaver are good as a couple of state police officers while James Grace is quite funny as the big brute of the police that Mac always fight against. Daniel von Bargen is excellent as the smarmy police chief Captain Grady who has no respect for the troopers and O’Hagan. Marisa Couglan is wonderful as the police dispatcher Ursula who is the only cop that seems to care about her job as she also has feelings for Foster.

Brian Cox is great as Captain O’Hagan who tries to tell his troopers to do their job and not get into any pranks while he is also a very funny man with a few pranks of his own as he gets his moments to be hilarious in the film’s third act. Paul Soter is superb as the nice guy Foster who likes to have fun while trying to woo Ursula as they work together on the case. Steve Lemme is fantastic as Mac as this man of extremes who likes to drive very fast and do all sorts of crazy shit such as getting into fist-fights and wear metallic jock-straps. Erik Stolhanske is brilliant as the rookie Rabbit who deals with the pranks and hazing as well as endure Farva. Jay Chandrasekhar is incredible as Thorny as the second-in-command who tries to do his job and deal with his family while being the one who leads the investigation. Finally, there’s Kevin Heffernan in a hilarious role as Farva as the guy who always get the butt of the jokes as he has some behavioral issues that prevents him from going back to be a trooper as he is often a liability to the state troopers.

Super Troopers is a marvelous comedy from the Broken Lizard comedy troupe. Armed with a great cast including a hilarious supporting turn from Brian Cox, the film is definitely a smart and entertaining comedy that isn’t afraid to be silly or childish while letting the audience have fun with them. In the end, Super Troopers is a fantastic film from Jay Chandrasekhar and the Broken Lizards troupe.

I love this movie, I'm glad you did too. It's so stupid, yet so hilarious.

It's just a fun film to watch as I often watch it whenever it's on. It's so good. Get me a liter of cola before I break your face.

I've been telling myself to watch this movie for years and just haven't gotten around to it. I guess I need to, especially since everyone keeps saying how fun it is.

@Wendell Ottley-It's one of those films where you just need to turn off your brain and just have a good time. Meow go see it.... meow!!!

I love the hell out of this movie too. Easily one of my favorite comedies. I still love Brian Cox for doing it. I really appreciate when seemingly serious actors are able to cut loose and have some fun.

@Alex Withrow-Brian Cox made the whole film enjoyable. Even with that line... "I believe that my when shit turns purple and smells like rainbows" or the moment where he gets completely shit-faced and decides to destroy Grady's yard. "What are you, drunk?" "Drunk enough to kick your ass".

Man this movie takes me back. I remember watching it a lot with friends at parties. The scene with Jim Gaffigan and the "Meow" quotes still makes me laugh. Nice post

@The Vern-the "meow" scene is classic. That is a film that will never get old.

Hilarious movie - one of the rare comedies I can watch again and again and still find really funny. So many classic scenes and lines of dialogue. I sure hope these guys do a sequel. I've heard that one has been in the works for some time....

@J.D. Lafrance-I'm waiting for that sequel. I want to see it and I hope Brian Cox returns for the 2nd one.