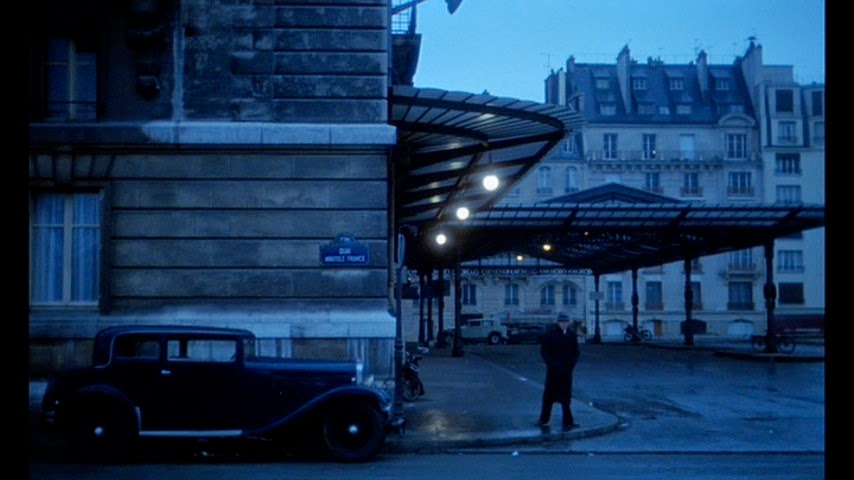 Based on the novel by Alberto Moravia, Il Conformista (The Conformist) is the story of an Italian man who is assigned to France to assassinate an old colleague for the Fascist government. Written for the screen and directed by Bernardo Bertolucci, the film is an exploration into a man eager to fit in as he thinks about his action as well as coming to terms with who he is. Starring Jean-Louis Tritnignant, Stefania Sandrelli, Dominique Sanda, Enzo Tarascio, and Gastone Moschin. Il Conformista is a mesmerizing yet provocative film from Bernardo Bertolucci.

Set in 1930s Italy, the film is an exploration into a man wanting to become part of the rising Fascist movement in Italy as he reflects on his life and the decisions he’s made to become a Fascist as he is ordered to kill an old colleague for his government. It’s a film with a narrative that moves back-and-forth where Marcello Clerici (Jean-Louise Trintignant) is about to watch the assassination of his old professor Quadri (Enzo Tarascio) that he orchestrated with the help of his colleague Manganiello (Gastone Moschin). Yet, Clerici would ponder about not just his troubled life which motivated him to find normalcy in Fascism where he would marry the kind yet dim Giulia (Stefania Sandrelli). Upon the moves he makes to meet Quadri, he would also meet Quadri’s wife Anna (Dominique Sanda) who would seduce him and Giulia making things more complicated for Clerici.

Bernardo Bertolucci’s screenplay takes the back-and-forth narrative as a way to explore the mind of Clerici and what is troubling him as he yearns to be part of the world of Fascism. The first act is about Clerici going on the road with Manganiello as they drive to the spot where they will kill Quadri as Clerici talks about the moment he is given a chance to join the party with the help of friend Italo (Jose Quaglio) as it would help his reputation and gain the approval of Giulia’s family. Still, there’s aspects of Clerci that haunts him as his mother (Milly) is a morphine addict while his father (Giuseppe Addobbati) has become mentally-insane. In order for his marriage to Giulia to be approved by the authorities, he confesses to a priest about being molested by his chauffer Lino (Pierre Clementi) whom he had killed.

Just as Clerici tries to come to terms with his troubled past and his eagerness to do what is necessary for the Fascist party. His target in Quadri proves to be complicated as he is an anti-Fascist that is considered dangerous as Clerici has a hard time in wanting him dead since Quadri’s views seem much less controlling. Still, Clerici is being watched by Manganiello and other Fascist officials as he becomes lost in his mission while his own personal life starts to go into disarray. Especially in the women in his life in Giulia and Anna where the former might not be very smart as she tends to a person who holds a certain idea of what Clerici needed to be part of the Fascist movement. Then there’s Anna who is this very liberated and seductive woman who would engage into a homosexual fling with Giulia as she seems to be someone that also carries an innocence that intrigues Clerici as he would be torn by what he needed to do to conform and what he wants in his life.

Bertolucci’s direction is definitely a marvel to watch not just in some of the compositions he creates but also the mood that is conveyed. There’s elements of the film that showcases Clerici’s own internal struggles about what he is about to do as Bertolucci maintains a close-up that doesn’t show too much about Clerici as he is about to take part in his destiny. Much of the film’s flashback scenes are presented with style from the usage of the wide shots as Bertolucci’s approach to framing is very entrancing. Notably a scene where Clerici is about to meet a minister (Benedetto Benedetti) as it’s this wide shot where Clerici is at the first floor at the edge of the frame while a man is on the stairs asking for him. It’s among these shots that plays into Bertolucci’s own sense of style as some of it is quite humorous while others are just chilling that includes this slow tracking shot of Clerici and his mother waiting in their car as leaves blow through the road.

Other moments in the film that showcases Bertolucci’s own unique style are a couple of party scenes where one of them is a blind-dance scene where Clerici attends the party with the blind Italo as it plays to the angles that Clerici needed to play. The other party scene involves Anna and Giulia where Clerici watches as it would showcase his struggle while everyone else around him is having fun. The film’s climax is a very chilling one where it involves a much looser though darker presentation where it’s about the rich photography that contrasts with this element of suspense. All of which would be followed by a more somber epilogue over not just the decision that Clerici has made but also into the question of conformity itself. Overall, Bertolucci creates a very engrossing yet enchanting film about a man trying to fit in as he struggles with his own identity.

Cinematographer Vittorio Storaro does incredible work with the film‘s gorgeous photography from the usage of bluish colors for some of the exterior scenes along with some entrancing lighting schemes and vibrant colors that includes shots in the train where Giulia and Clerici make love. Editor Franco Arcalli does excellent work with the editing with its very stylish approach from its unorthodox match cuts as well as playing with its back-and-forth narrative. Production designer Fernando Scarfiotti and set decorator Osvaldo Desideri do fantastic work with the set pieces from the studio where Clerici and Italo worked at early in the film to the home of Quadri as well as the more oppressive look of the government buildings in Italy.

Costume designer Gitt Magrini does amazing work with the period costumes that includes the stylish and gorgeous dresses that Giulia and Anna would wear along with the suits that the men wear. The sound work of Mario Dallimonti is superb for the way much of the locations are captured as well as in the sound editing to create paralleling scenes in Clerici‘s own flashbacks and what he is going through in the present scene. The film’s music by Georges Delerue is phenomenal for its lush and somber score that is driven by woodwinds and melancholic orchestration as it plays into Clerici‘s own aimlessness as the soundtrack also includes music of the 1930s.

The film’s great cast includes some notable small roles from Milly as Clerici’s morphine-addicted mother, Giuseppe Addobbati as Clerici’s mentally-ill father, Yvonne Sanson as Giulia’s mother, Fosco Giachetti as a Fascist colonel, and Benedetto Benedetti as the minister who interviews Clerici to see if he’s good enough to join the Fascist party. Other noteworthy small roles include Jose Quaglio as the blind Fascist mouthpiece Italo who would prompt Clerici to join the Fascists, Pierre Clementi as the chauffer the young Clerici was molested by as he would play a crucial role to the emotional baggage that Clerici would carry, and Gastone Moschin in a superb performance as Manganiello who is sort of the film’s conscience who watches over Clerici to ensure that the task happens.

Enzo Tarascio is excellent as Professor Quadri as an anti-Fascist intellectual whom Clerici has to kill as he would bring a lot of confusion into Clerici as he talks about the impending doom for the movement that Clerici is a part of. Dominique Sanda is amazing as Quadri’s wife Anna as this seductress who would try to woo Clerici while also woo the more naïve Giulia as it’s a very evocative performance. Stefania Sandrelli is brilliant as Giulia as Clerici’s dim yet loyal wife who has no clue what her husband is doing as she wants to enjoy life as she later understands what he does as it’s a performance that is very charming to watch. Finally, there’s Jean-Louis Trintignant in a remarkable performance as Marcello Clerici as this troubled man who carries the task to kill an old colleague while dealing with his own identity as Trintignant brings a performance where it’s brash at times but also filled with melancholia as he tries to repress his memories as it’s one of Trintignant’s finest roles.

Il Conformista is an outstanding film from Bernardo Bertolucci. Led by an incredible Jean-Louis Trintignant as well as strong supporting performances from Stefania Sandrelli, Dominique Sanda, Enzo Tarascio, and Gastone Moschin plus Vittorio Storaro’s rapturous photography and Georges Delerue’s hypnotic score. The film is definitely not just one of Bertolucci’s finest films but it’s also an entrancing character study of a man trying desperately to fit in so he can feel normal only to be ravaged by his own past. In the end, Il Conformista is a riveting yet sensational film from Bernardo Bertolucci.

Definitely my favorite Bertolucci film. You're right, this film is so damn entrancing. Goddamn hypnotic.

Re-watching it made me fall in love with the film all over again though I think it needs to be released on Criterion for a proper Blu-Ray release. Besides, who would not want to embark into a three-way with Stefania Sandrelli and Dominique Sanda?