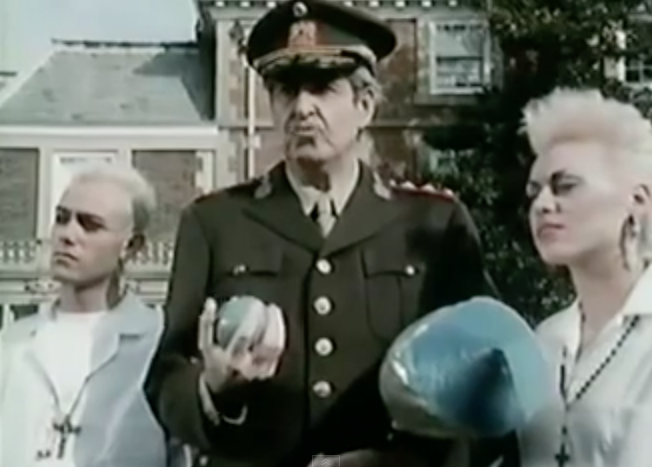 Directed by Willie Christie and written by Roger Waters that is based on the 1983 album by Pink Floyd, The Final Cut is a 19-minute short film that revolves a man watching images about war as he yearns for the post-war dream. The film features four tracks from the band’s album which all play into Waters’ response to the 1982 Falkland Island war between Britain and Argentina as well as criticism towards Margaret Thatcher. Starring Alex McAvoy and Roger Waters. The Final Cut is a somber yet entrancing film by Willie Christie.

The film revolves around a man who watches television one day as he sees images about war as he copes with his son fighting a war as he ponders the idea of the post-war dream through a series of videos by Pink Floyd. Much of which play into a man haunted by the horror of war and the demands of his government as it is an anti-war short film told through four songs by Pink Floyd including its title track. The videos serve to reflect the ideas of not just the concept of the post-war dream in its title track but also that sense of loss through Margaret Thatcher. Even as songs like The Gunner’s Dream and Not Now John play into not just the sense of loss but also that sense of demand for war in the latter as its clip is presented with surreal imagery with women as geishas tempting men building war machines.

Willie Christie’s direction is very intriguing with its opening scene where this old man is driving on a highway to an unknown location where he stops to see a veteran standing on a bridge. Christie’s direction for the title track features Roger Waters sitting on a couch during a psychiatric session as he sings the song behind the shadows to various stock footage of the post-war life. Christie’s compositions often range towards medium and wide shots that include some very sobering scenes involving the old man watching images about war as he looks towards a picture of his own as the old man is played touchingly by Alex McAvoy. Especially as Christie also provide satires by having actors play such figures as Winston Churchill, Napoleon Bonaparte, Adolf Hitler, Augusto Pinochet, and Margaret Thatcher as representation of power. Overall, Christie creates a visually-haunting yet eerie film about a man’s desire for the post-war dream.

You've been all in on some Floyd! I haven't even heard of this one. Good stuff.

@Wendell-I needed something to write about and doing some revisiting on Pink Floyd forced me to watch or re-watch a few things. The Final Cut I think is an excellent album it is a very polarizing one among Floyd fans since it is really more of a Roger Waters album than a Floyd album while the film itself is still a good short.

@Fisti-Thanks. If there's a list of anti-war films, this should be mentioned as some kind of honorable mention.