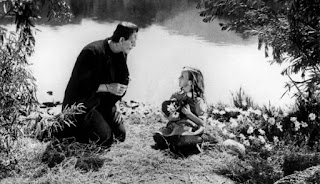 Based on the novel by Mary Shelley and the play by Peggy Webling, Frankenstein is the story of a mad scientist who decides to bring a man back to life while unknowingly using an abnormal brain for his monster. Directed by James Whale and screenplay by Francis Edward Faragoh and Garrett Fort that is adapted by John L. Balderston with un-credited contributions by Robert Florey and John Russell, the film is a monster movie where a man tries to cheat death only for things to go bad. Starring Colin Clive, Mae Clarke, John Boles, and Boris Karloff as the monster. Frankenstein is a rapturous and chilling film from James Whale.

Set in a European village, the film follows a mad scientist, who is the son of a powerful baron, who decides to take his experiment of resurrection to great extremes where he creates a monster that eventually wreaks havoc. The film’s simple premise play into the fallacy of resurrection as well as what happens when obsession loses sight of reason. The film’s screenplay doesn’t just explore the madness of Dr. Henry Frankenstein (Colin Clive) and wanting to go to extremes to create humanity and give it life but also in thinking that he can become God. The monster that Frankenstein created is accidentally given an abnormal brain where there is an innocence to the monster but because of fear and misunderstanding. He would kill those either accidentally or in an act of self-defense as it definitely causes trouble where Dr. Frankenstein realizes what he has done and what he has to do.

James Whale’s direction is definitely stylish in terms of the visual language that he creates as well as finding ways to create a sense of horror through moments of action but also in off-screen moments. Shot in soundstages, the film does play into a world that seems like the old world yet the methods of Dr. Frankenstein seem in tune with the new world as he craves for greatness. Many of Whale’s compositions are quite evocative in terms of its mood as well as create some air of chill in the scenes where Dr. Frankenstein conducts his experiment. There aren’t many usage of close-ups in the film as Whale favors wide and medium shots to play into setting of the scene yet the close-ups he uses do express either the madness of Dr. Frankenstein or the curiosity of its monster.

The film’s climax would play into a duel of man vs. monster as it’s a grand climax where villagers try to find the monster yet there is an ambiguity considering that the person who is really responsible for all of the chaos is Dr. Frankenstein since he was the one that tried to play God. From a certain point of view, it is the monster that is really innocent and is a victim of misunderstanding. It’s something that is quite subversive for its time in the approach of a monster film as Whale seems to care a lot about the monster rather than the creator. Overall, Whale creates a complex yet eerie film about a man’s attempt to resurrect the dead in the form of a monster.

Cinematographer Arthur Edeson, with un-credited work by Paul Ivano, does brilliant work with the film‘s black-and-white cinematography to create some unique lighting scheme and shadows for some of the interiors set at night as well as some of the gorgeous yet naturalistic lighting for the scenes in the day. Editors Clarence Kolster and Maurice Pivar do excellent work with the editing as it has some unique rhythmic cuts to play into its suspense and horror as well as create straightforward cuts for the dramatic scenes. Art director Charles D. Hall does amazing work with the design of the castle and lab that Dr. Frankenstein works at as well as the home of his father and the village.

Makeup designer Jack P. Pierce does fantastic work with the look of the monster in every detail as it is one of the major highlights of the film. Sound recording supervisor C. Roy Hall does superb work with the sound as it has some unique sound effects to play into the film‘s suspense. The film’s music by Bernhard Kaun is wonderful for its orchestral-based score that is bombastic at times while it also has an element of chill to play into its suspense.

Mae Clarke is amazing as Elizabeth as Dr. Frankenstein’s fiancée who tries to get Dr. Frankenstein back to reality as well as deal with the outcome of what he had created as it’s a role that could’ve been very substandard but Clarke does wonders with her performance. Colin Clive is excellent as Dr. Henry Frankenstein as a mad scientist who is eager to create life from death as it’s a performance full of energy and terror where Clive really gets to have some scene-stealing moments. Finally, there’s Boris Karloff in a phenomenal performance as the monster as a man brought back to life with an abnormal brain where Karloff’s physicality and lack of speech would be the key to the performance that also exudes sympathy and warmth as it’s one of the definitive performances of a monster ever created.

Frankenstein is a tremendous film from James Whale that features an incredible performance from Boris Karloff as the monster. Featuring some gorgeous visuals, a superb ensemble cast, and a premise that is very complex as well as engaging. It’s a film that isn’t just an entrancing horror film but also a monster movie that brings depth to something that audiences are supposed to fear. In the end, Frankenstein is a sensational film from James Whale.

Another great, classic Universal monster movie. It's just a wonderful tale about the dangers of man playing God as well as about our inherent fear of the unknown. Love this film, and Bride of Frankenstein.

This was better than I thought it would be while I still thought of Young Frankenstein throughout the film. Bride of Frankenstein is definitely next in line to watch.

I've only seen bits and pieces of this one, as well as that Bela Lugosi's Dracula, but it certainly is an iconic portrayal that's been copied many times over. The moral tale of the ramification of playing God is one that remains to be a popular subject in monster films.

@ruth-And that is why the film remains relevant to this day as they still hold up and manage to say a lot.