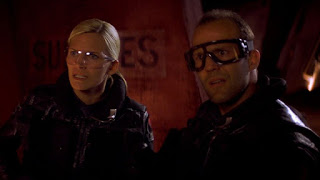 Directed and co-scored by John Carpenter and written by Carpenter and Larry Sulkin, Ghosts of Mars is the story of an intergalactic police officer and her team traveling to Mars for a prison transport where things go wrong in the planet. Set in the 22nd century, the film is a sci-fi horror thriller where space cops and a criminal team up to battle monsters on Mars. Starring Natasha Henstridge, Ice Cube, Jason Statham, Clea Duvall, Pam Grier, and Joanna Cassidy. Ghosts of Mars is a stylish but messy film from John Carpenter.

It’s the 22nd Century where Mars has been colonized and the planet is now breathable to humanity yet towns are ravaged where the intergalactic police make an unsettling discovery just as they were to transport a prisoner. That is pretty much what the film is about where cops is forced to work with a convicted murderer to fight these monsters as they were once human who are now possessed by ghosts from Mars. Yet, it is told in a reflective manner by Lt. Melanie Ballard (Natasha Henstridge) who reports what happened during a simple prison transfer job to her superiors as it reveals a much larger story. The film’s screenplay is quite simple yet it has a lot of expositions and perspective from other characters in what they saw including Dr. Arlene Whitlock (Joanna Cassidy) who revealed how these ghosts emerge. The multiple perspectives and expositions do create a script that is very messy as well as be over-explained and not allow the audience to create their interpretations into what happened.

John Carpenter’s direction is definitely stylish as it plays into a futuristic setting as much of the film is set at night. Shot on location at a gypsum mine in New Mexico, the film plays into this world that is emerging in its colonization state but is becoming undone by these monsters. While Carpenter would use some wide shots to establish some of the locations, he maintains an intimacy with the medium shots and close-ups as it plays to the severity of what Lt. Ballard and her fellow officers are facing. There are some moments that are exciting in the action but the suspense is kind of lacking as well as uninspired due to the fact that it feels derivative from other kind of films that Carpenter has made. Even as some of the moments involving the visual effects seem to be lacking as it’s probably due to the limitations in the budget. Despite these shortcomings, the film is still entertaining while not taking itself seriously as it does have some humor. Overall, Carpenter creates a thrilling though flawed film about space cops and criminals fighting evil ghosts on Mars.

Cinematographer Gary B. Kibbe does excellent work with the cinematography from the usage of lights and distorted images for some of the scenes involving the ghosts to the interiors as it‘s mostly straightforward. Editor Paul C. Warschilka does some fine work in the editing though it‘s over stylized with its transition wipes and dissolves as it goes a little overboard. Production designer William A. Elliot, with set decorator Ronald R. Reiss and art directors William Hiney and Mark W. Mansbridge, does fantastic work with the look of places on Mars as well as the interior for the prisons and such. Costume designer Robin Michel Bush does nice work with the costumes as it‘s mostly low-key while it‘s more creative for the look of the creatures the cops and criminals have to deal with.

The special effects makeup work of Howard Berger, Robert Kurtzman, and Greg Nicotero is brilliant for the look of the possessed humans who have become enraged Martians as they all have something unique in their look. Visual effects supervisor Lance Wilhoite does some OK work with the visual effects for some of the scenes involving the trains though the effects in the battle scenes look unfinished and awkward. Sound editor Joe Dorn and sound designer David Bartlett do terrific work with the sound as it play into the way the Martians sound as well as some of the gunfire and such. The film’s music by John Carpenter is superb for its electronic-based score filled with synthesizers as the music also feature contributions from the thrash metal band Anthrax as well as some contributions from Elliot Easton of the Cars, Robin Finck of Nine Inch Nails/Guns N’ Roses, Steve Vai, and Buckethead.

The casting by Reuben Cannon is wonderful as it feature some notable small roles from Robert Carradine as a train engineer, Wanda de Jesus as a criminal who fights the Martians, the trio of Duane Davis, Lobo Sebastian, and Rodney A. Grant as a trio of thugs trying to break out Desolation Williams, Liam Waite as the space cop Descanso, and Richard Cetrone as the Martians leader. Joanna Cassidy is terrific as Dr. Arlene Whitlock as a scientist who saw the chaos that unleashed the ghost Martians while Pam Grier is alright in her small role as the police leader Commander Braddock. Clea Duvall is superb as the rookie cop Bashira Kincaid as a young woman new to the field as she is in shock in what she’s seeing as she would eventually grow to kick some ass.

Jason Statham is fantastic as Sgt. Jericho Butler as the comic relief of the film who is a smooth talker and says the funniest lines while being this full-on badass as only someone like Statham could play that role to the fullest. Ice Cube is excellent as James “Desolation” Williams as a wanted murderer who is supposed to be transferred to a prison as he is a cunning and skilled fighter that is aware of what is going as well as reveal some truths into the murders he’s been accused of. Finally, there’s Natasha Henstridge in a brilliant performance as Lt. Melanie Ballard as this no-nonsense cop with a weakness for hallucinogenic drugs that is eager to do her job while knowing what is out there as she tries to help her fellow cops and such fight off against the Martians.

Despite some clunky visual effects and an overwritten yet messy script, Ghosts of Mars is still a worthwhile film from John Carpenter. Thanks in part to a nice soundtrack and fun performances from Natasha Henstridge, Ice Cube, and Jason Statham. It’s a film that has some style as well as moments where it doesn’t take itself so seriously. In the end, Ghosts of Mars is a good film from John Carpenter.

John Carpenter Films: Dark Star - Assault on Precinct 13 - Halloween - Someone’s Watching Me! - Elvis - The Fog - Escape from New York - The Thing - Christine - Starman - Big Trouble in Little China - Prince of Darkness - They Live - Memoirs of an Invisible Man - Body Bags - In the Mouth of Madness - Village of the Damned - Escape from L.A. - Vampires - The Ward

Haven't seen this one, but I'm not in such a rush. Doesn't sound like I'm missing much.

I have a soft spot for Ghosts of Mars; it's like a sci-fi version of Assault on Precinct 13! It's not one of Carpenter's better films, but it still has a fun B-movie vibe to it. It's cheesy but not in a bad way.

@Wendell-It's not that bad but it is very derivative of Carpenter's other films. Plus, it was originally supposed to be another Snakes Plisken movie but since Escape from L.A. bombed, that didn't happen.

@Dan Heaton-I was re-watching it today as I was able to notice some flaws but I still had fun. I like Carpenter's films when they don't take themselves seriously.

This is one of my friend's favorite movies and I fell asleep watching it. Whoops.