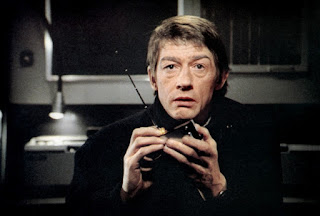 Based on the novel by Robert Ludlum, The Osterman Weekend is the story of a network news broadcaster who has been approached by the CIA to meet with friends during a weekend outing to see if they‘re really KGB spies who are threatening national security. Directed by Sam Peckinpah and screenplay by Alan Sharp from a screen story by Ian Masters, the film is a suspense thriller set during the Cold War as it play into a eerie weekend for a man. Starring Rutger Hauer, John Hurt, Craig T. Nelson, Dennis Hopper, Meg Foster, Helen Shaver, Chris Sarandon, and Burt Lancaster. The Osterman Weekend is a fascinating though flawed film from Sam Peckinpah.

The film revolves around a controversial network news broadcaster, whose TV show has often criticized the American government, that is met by officials from the CIA and the FBI who tell him that his three powerful friends are KGB spies. It’s a film that isn’t just about trust but also a world where everyone is watched as it’s part of this emergence of a new world order as this news broadcaster finds himself targeted for his critiques of the government. Still, he has to force himself to see that there are dark forces as he reluctantly agrees to help them on the condition that the CIA director appears on his show as it would all revolve on this weekend outing with friends that becomes unlike any other weekend. Alan Sharp’s screenplay does create a lot of intrigue about not just national security but also in who to trust as the protagonist John Tanner (Rutger Hauer) becomes a pawn in a game run by the CIA director Maxwell Danforth (Burt Lancaster).

Helping Danforth in assignment is an agent in Lawrence Fassett (John Hurt) who has his own motivations to do this as he believes the KGB killed his wife and wants revenge where he does whatever to help Tanner expose and hopefully get Tanner’s friends to defect. The second act would be set in Tanner’s home with his wife and son where their friends would appear for an annual weekend where no one, except for Tanner, knows they’re being watched by Fassett nearby through surveillance video. What was supposed to be a fun weekend ends up being very tense as the TV producer Bernie Osterman (Craig T. Nelson), plastic surgeon Richard Tremayne (Dennis Hopper), and the stock trader Joseph Cardone (Chris Sarandon) become uneasy by strange things happening. Though it does have a straightforward narrative, the script doesn’t flesh out the three men accused as spies fully as well as in what is revealed. Plus, the twists and turns become very messy as it does lose some insight into what is happening and which characters are good or evil.

Sam Peckinpah’s direction is definitely mesmerizing for the way it plays into the mystery and suspense as it starts off with a surveillance video of Fassett and his wife having sex until she is killed while he is in the shower. It play into this emergence of a world where everyone is watched as well as what kind of power the American government is willing to do during the age of the Cold War as well as target the media who have begun to question their tactics. Shot largely in Los Angeles, the film play into this emergence of an ever-increasing world of surveillance and media trying to manipulate what is truth and fiction. Much of Peckinpah’s approach to compositions are intimate as well as using a lot of intricate camera work to play into growing new world order in the Cold War. Especially with the usage of surveillance video as it adds to the suspense where Tanner would watch Fassett on a TV set talking to him and vice versa as there would be bits of humor that would emerge in the film.

There would be moments of violence such as a chase scene where Tanner goes after men attempting to kidnap his wife and son as well as a climatic confrontation involving Tanner where it has a lot of the stylistic touches that Peckinpah is known for. A lot of it is quite exciting and such yet the film does feel very muddled during the second act and its lead-up to the third where it loses some of its suspense. It’s not just the script that becomes messy but it is also the fact that there were some forces behind the scenes who wanted to create something with a lot of twists but it ends up becoming somewhat predictable and heavy-handed which is something Peckinpah isn’t about. Despite the flaws and the fact that he didn’t have final cut, Peckinpah does at least make a fascinating thriller about a TV broadcast reporter being used as a pawn to lure his friends who are believed to be KGB spies.

Cinematographer John Coquillon does excellent work with the film‘s cinematography as it largely focuses on low-key lighting and such for many of the film‘s interiors and nighttime exteriors through its low-grade film stock. Editors Edward M. Abroms and David Rawlings do some nice work with the editing as it feature some slow-motion cutting for some of the action including a great chase scene and in some of the action in the climax though it does feel muddled at times. Art director Robb Wilson King and set decorator Keith Hein do fantastic work with the look of the home that Tanner lives which is the setting for the weekend as well as the office that Danforth works at.

Sound designers Alan Howarth and Clancy T. Troutman do terrific work with the sound with the way some of the surveillance equipment is presented as well as in some of the action though the mixing is low in the way some of the dialogue is presented at times. The film’s music by Lalo Schifrin is pretty good for its jazz-like score with elements of keyboard and piano-based music as bits of orchestral music that play into the suspense though it feels like it doesn‘t do enough to make it intense.

The casting by Michael McLean is wonderful as it feature some notable small roles from Merete Van Kamp as Fassett’s wife, Christopher Starr as Tanner’s son Steve, Jan Triska as a KGB agent, Hansford Rowe as a general Tanner destroys on his TV show, and Sandy McPeak as Danforth’s right-hand man Stennings whom he aids in creating trouble with Danforth. Cassie Yates is good as Cardone’s wife Betty who becomes uncomfortable with the weekend due to the tension while Helen Shaver is fantastic as Tremayne’s wife Virginia as this wild and talkative woman with a cocaine addiction who just riles people up as she manages to piss off Tanner’s wife Ali. Meg Foster is excellent as Ali as Tanner’s wife who is wondering what is going on as she also suspicious of Fassett where she would have her moment as a full-on badass with a bow-and-arrow. Chris Sarandon is terrific as the stock trader Joseph Cardone as someone who becomes unhinged by what is happening on the weekend though it’s a very underwritten role. Dennis Hopper is superb as Richard Tremayne as a plastic surgeon who tries to maintain some control despite his wife’s drug addiction as he is the most sensible of the three men.

Craig T. Nelson is amazing as the TV producer Bernie Osterman as a man who is the most suspicious of the three that could be affiliated with the KGB as he is also a martial arts expert where Nelson manages to convey that ambiguity despite his ridiculous-looking mustache. Burt Lancaster is remarkable as the CIA director Maxwell Danforth as this man who is willing to do whatever it takes to win the Cold War while trying to get Tanner to see the bigger picture of what will happen as he also has some ambiguity to him. John Hurt is marvelous as Lawrence Fassett as a British agent working for the CIA who would aid Tanner in uncovering the truth to pursue his revenge over his wife’s death while there is also something about him that is ambiguous that is added with some offbeat humor. Finally, there’s Rutger Hauer in a stellar but flawed performance as John Tanner as this TV show host who finds himself being a pawn where Hauer doesn’t really do much to flesh out his character due to the faults of the script despite his determination to try and make sense of things and take action.

Despite the post-production tampering, faulty script, and muddled tone, The Osterman Weekend is still a terrific and fascinating film from Sam Peckinpah. Featuring a fantastic ensemble cast and a compelling look into the world of surveillance and national security. It’s a film that is definitely flawed but does say a lot about the dark aspects of the modern world in the age of the Cold War. In the end, The Osterman Weekend is a good yet messy film from Sam Peckinpah.

I've never seen this but now you've given me a nudge!

Hmmm, I'm not fond of Peckinpah's style from what I've seen so far, but the premise of this one is intriguing. Boy I almost didn't recognize John Hurt in that picture.

@assholeswatchingmovies.com-It's not an easy film to find but it's worth checking out no matter how flawed it is.

@ruth-It's from the man who wrote those Jason Bourne novels so it is quite interesting but don't expect anything grand as it is one of Peckinpah's weaker films.