For the first week of June 2017 as part of the Thursday Movie Picks series hosted by Wanderer of Wandering Through the Shelves. We go into the world of films with tall buildings whether it’s a film about a tall building or set in tall buildings or feature tall buildings. Here are the three films that I pick for this category. 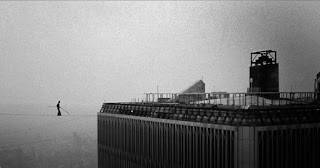 What could be better than having a film set in a tall building? How about two? Well, this actually happened where in 1974. Philippe Petit did the impossible where he did a high-wire walk between the two World Trade Center towers as it is told by James Marsh in one of the finest documentary films of the 21st Century so far. Especially as it showcases what Petit would do to pull off this stunt as Marsh would create scenes as if it was a heist as it adds a lot to the documentary. 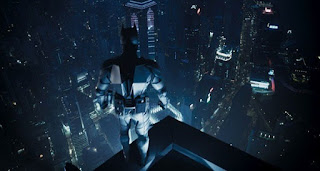 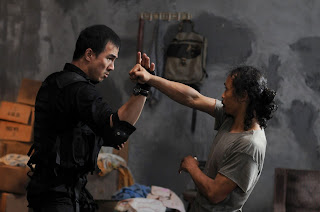 From Gareth Evans is probably one of the best action films of the 21st Century so far. It’s all about a police officer going into a building and beating up bad buys while going up 15 stories to destroy a drug lord. Featuring incredible performances from Iko Uwais as a rookie cop as well as Yayan Ruhian as a badass henchman. It’s a film that breathes new life to the action film genre as well as showing what they could be again without the usage of CGI and fast-cut editing styles.

We matched on Man on Wire. I left that you went with The Dark Knight. I approve of that movie in every single category no matter what. lol. I never did see The Raid though.

Man On Wire is popular today and it is something I have to see. I watched the movie and thought it was good and was totally freaked out by the heights. I haven't seen the other films

LOVE Man on Wire - perfect choice for this week (I picked it too!). Haven't seen The Raid but I feel like I should.

I didn't love The Dark Knight, but it does use its tall buildings very well!

LOVED Man on Wire even though I was initially reluctant to watch it since I'm not very good with heights. But it was so much more than the actual walk that by the time they got to that part I was engaged by the story and the height while onerous didn't effect me the way it usually does.

I didn't care much for The Dark Knight and haven't seen The Raid but it sounds worth checking out and made me realize that no one has chosen Die Hard yet which surprises me.

My second and third picks are ones I like a lot but being a disaster movie junkie the instant I read the theme my first choice, which is a huge favorite of mine, popped into my head.

The Towering Inferno (1974)-It’s the grand dedication ceremony for the world’s tallest building, The Glass Tower a 138 story skyscraper in San Francisco and the party is being held on the top floor loaded with movie stars, politicians and the building team in attendance. But trouble’s abrewing when architect Doug Roberts (Paul Newman) arrives back in town to find that corners have cut and the wiring for the building is substandard. He’s right to be worried since when a small fire breaks out on the 81st floor it spreads quickly trapping the guests while the fire department works feverishly to save them. One of the big three Irwin Allen disaster films of the 70’s, along with Airport and The Poseidon Adventure, this was an enormous hit on release with an amazing cast of some of the biggest stars of the time-Steve McQueen, Faye Dunaway, William Holden, Fred Astaire, Robert Wagner, Robert Vaughn and Jennifer Jones (in her final film) plus dozens of recognizable performers in smaller roles.

Plaza Suite (1971)-Three act Neil Simon comedy based on his stage success all takes place in Suite 719 of New York’s Plaza Hotel. Each vignette stars Walter Matthau in different roles with three different leading ladies, Maureen Stapleton, Barbara Harris and Lee Grant in tales of a marriage in crisis, an assignation and a long married couple whose daughter has locked herself in the bathroom moments before her wedding downstairs. None are bad but the first and third are the strongest.

Fourteen Hours (1951)-Robert Cosick (Richard Basehart) is at the end of his rope and has decided to commit suicide by jumping from the ledge of the 15th floor of the Roosevelt Hotel high above the city. As police officer Charlie Dunnigan (Paul Douglas) tries to reason with him calling in both his girlfriend (Barbara Bel Geddes) and his mother (Agnes Moorehead) the event turns into a sideshow lasting 14 hours. Quite similar to the recent Man on a Ledge but a better film this was Grace Kelly’s screen debut in a small role.

Surprised to see TDK, but any mention of that movie is good with me. Love your other two picks, as well.

Can't go wrong with The Dark Knight. Man on Wire is a masterpiece. I really need to see The Raid movies already.

That scene where Batman jumps off the building and dives makes me ill. Its an incredible shot but my gad I find it hard to watch - mostly because I have an issues with heights...

@Birgit-Man on Wire is easily the best of the bunch.

@Daniel-If you're a fan of action films, The Raid is essential.

@joel65913-Die Hard was too easy of a choice as is The Towering Inferno which I haven't seen but I hope to soon.

@Kevin-The Raid is a must-see as well as its sequel.

@Katie Hogan-OK, that I can understand. I don't blame you for freaking out.