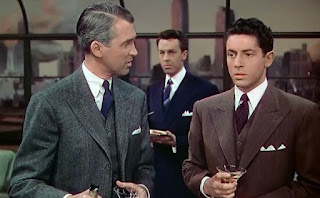 Based on the play by Patrick Hamilton, Rope is the story of two college friends who kill a friend inspired by their philosophy professor in the idea of committing the perfect murder. Directed by Alfred Hitchcock and screenplay by Arthur Laurents from a story by Hume Cronyn, the film is the first film of Hitchcock to be shot in color as it is set entirely inside an apartment. Starring James Stewart, John Dall, Farley Granger, Joan Chandler, Sir Cedric Hardwicke, Constance Collier, Douglas Dick, and Edith Evanson. Rope is a thrilling and evocative film from Alfred Hitchcock.

Set entirely in a New York City penthouse apartment, two college friends kill their roommate and hide him inside a chest where they hold a dinner party for guests who are unaware that there’s a body inside the chest. Among the guest that is invited to this party is a philosophy professor whom they admire as he becomes very suspicious of what is happening as one of the hosts acts erratically during the course of the party. Arthur Laurents’ screenplay, with un-credited work from Ben Hecht, never steps out of the setting with the exception of the opening credits sequence outside of the penthouse.

It begins with two young men in Brandon Shaw (John Dall) and Phillip Morgan (Farley Granger) strangling David Kentley (Dick Hogan) to death as they put him in this chest in their belief that they have committed the perfect crime. It’s all part of their plan to prove that their intellectually superior to the people they invited including the man that gave them this idea in Rupert Cadell (James Stewart). During the course of the party, everyone is wondering where Kent is including his father (Sir Cedric Hardwicke) and his aunt Mrs. Atwater (Constance Collier) as Cadell notices something is off as he is also wondering about Morgan who starts to drink heavily.

Alfred Hitchcock’s direction is definitely entrancing for the fact that it’s got a lot of long takes and takes place almost entirely inside this penthouse as the only scene not in the penthouse in the opening credit sequence. In using the penthouse as the setting for the entirety of the film, Hitchcock’s usage of tracking camera shots and long takes would allow him to capture what these two men are doing as well as this dinner party. All of which is taking place in real time where there is a lot of coverage into what Hitchcock is capturing with the camera. There are close-ups that would zoom out to go into a medium or a wide shot while there are also these unique compositions of what is happening as it’s all about the attention to detail of what is happening while a character is talking to someone. Even where Hitchcock is focused on a certain object or whatever thing the character is talking about as that person is off-screen. It would eventually lead to Cadell trying to see what is really going on as well as confront his own theories about superiority and inferiority. Overall, Hitchcock crafts an inventive yet intoxicating film about two men who hold a dinner party while hiding a dead body in the middle of the living room.

Cinematographers Joseph A. Valentine and William V. Skall do brilliant work with the film’s gorgeous Technicolor cinematography in creating a look that is colorful while providing some unique lighting early in the film as well as creating different mood for the exterior background. Editor William H. Ziegler does excellent work with the editing as it is very straightforward for a film that only contains ten shots in total with invisible cuts coming during close-ups of a character’s attire. Art director Perry Ferguson, with set decorators Howard Bristol and Emile Kuri, does fantastic work with the look of the penthouse apartment in all of its interiors including many of the objects in the living room as it help play into what is really inside the chest that the guests don’t know about.

Dress designer Adrian does wonderful work with the look of the dress of one of the guests who is baffled by the lack of her appearance of her fiancée. The sound work of Al Riggs is terrific for its naturalistic sound in the way many of the events in the room are presented as well as a few sound effects played outside of the apartment. The film’s music by David Buttolph is superb as it is mainly an orchestral score that appears in the opening and closing credits of the film with additional work from Francis Poulnec that is played on piano by the characters as well as other piano pieces provided by music director Leo F. Forbstein.

The film’s incredible cast feature notable small roles and performances from David Hogan as the unfortunate victim in David Kentley, Edith Evanson as the part-time housekeeper Mrs. Wilson who is also suspicious over what is going on, Douglas Dick as a friend of David in Kenneth Lawrence who is wondering where David is as he also has feelings for David’s fiancée Janet, and Constance Collier as David’s jovial aunt Anita Antwater. Sir Cedric Hardwicke is fantastic as David’s father Henry Kentley as a man who is aghast into Shaw’s view of things while wondering where his son is while Joan Chandler is brilliant as David’s fiancée Janet Walker as a columnist who is eager to meet David as she is concerned about his absence as she also deals with her former boyfriend Kenneth.

Farley Granger is excellent as Phillip Morgan as a co-conspirator of the murder who becomes consumed with guilt as he tries to keep it together throughout the party. John Dall is amazing as Brandon Shaw as another co-conspirator of the murder who is convinced nothing go wrong as he is a man of arrogance that thinks he had committed the perfect crime and has succeeded in being smarter than everyone. Finally, there’s James Stewart in a remarkable performance as Rupert Cadell as a former professor who had been the one who gave Shaw and Morgan the ideas of superiority and inferiority as he becomes very suspicious about what is going on at the party as well as being baffled by the way Morgan and Shaw have conducted themselves.

Rope is a tremendous film from Alfred Hitchcock. Featuring a great ensemble cast, a unique premise, and an unconventional yet rapturous presentation. The film is definitely one of Hitchcock’s quintessential films in terms of laying out the suspense as well as keeping it inside an apartment where many aren’t aware there’s a dead body inside a chest. In the end Rope is a spectacular film from Alfred Hitchcock.

I almost put this on my Blind Spot list one year then a few people told me how much they hated it so I scrapped it. I may give it a try eventually, I haven't seen enough Hitchcock.

@Brittani-Anyone who hated this film is a moron. It's actually considered to be one of Hitchcock's most important films. I would totally see it as I want to do more Hitchcock.

I've also heard a number of people say they didn't really care for this one, but I really enjoyed it.

@Wendell-There's a lot of people that didn't like it because it's spoiled early on in the film but that is the whole point. We want to know if all of these people at the party wonder what just happened.