For the second week of October 2017 as part of the Thursday Movie Picks series hosted by Wanderer of Wandering Through the Shelves. It’s the second week of the Halloween edition of the series as the subject is on dolls who either come to life to create a shitload of chaos or be used as something for the protagonist to cope with. Here are my three picks: 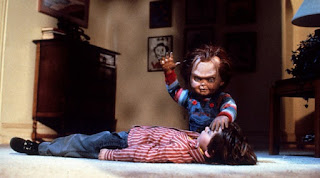 An obvious pick as it revolves around a kid who gets a popular doll for his birthday unaware that the doll had been possessed by an infamous serial killer who just wants to kill. It’s a fun horror film that has a kid haunted by this doll as the kid is accused of killing people when it’s really the doll. There’s some fun kills in the film as it would lead to a very popular franchise with a bunch of cool kills and other funny shit. 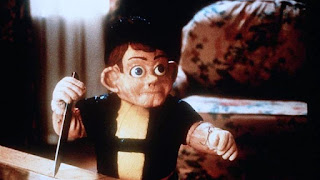 This straight-to-video film from the 1990s is also about a serial-killing doll but it’s Pinocchio who is given as a present to a young girl. It is a rip-off of Child’s Play but the puppet is wooden and plays innocence. It’s an OK film that is most notable for a scene in which Pinocchio stares at the babysitter who is seen in the nude as she’s taking a shower. That’s the highlight of the film. 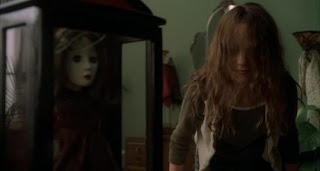 Though it’s not really about a doll but rather a portrayal of a troubled young woman trying to connect with other people as well as be fascinated by aspects of their bodies. Still, it is a great film from Lucky McKee that features Angela Bettis in an incredible performance as the titular role as the film is edited by Rian Johnson of Brick fame. Yet, the film does involve a doll that May has which she keeps in a glass case as it’s her only friend as it would play into the film’s third act that relates to May’s desire to find the perfect friend.

Child's Play is the only one I've seen and the only one of that series I seen either since I thought the movie was incredibly dumb.

I'd never heard of May until today and while it sounds too grisly for me if I was in the mood it sounds like something I might find interesting. Can't say that about the other.

This one was tough for me since horror isn't my thing but I found two and then changed my approach for the third.

Magic (1978)-When ventriloquist assistant Corky Withers (Anthony Hopkins) makes his first public performance alone he’s a bust. Afterward he’s given a dummy, Fats to work with. Slowly he improves and eventually is approaching the big time but something strange is happening, Fats seems to be taking control of not only their act but Corky’s actions. Feeling uneasy he takes a break at a cottage owned by his childhood sweetheart Peggy Ann Snow (Ann-Margret) where the hoped for relief doesn’t come but thanks to Fats things become increasingly dire. Creepy and unsettling. Notorious for having its initial TV preview pulled after a massive series of complaints that it was too frightening for children.

Attack of the Puppet People aka I Was a Teenage Doll (1958)-Mad doctor is lonely for companionship so he invents a machine that shrinks people to miniature size. When he pulls the trick on his secretary and her boyfriend they desperately try to discover a way to escape and once again return to normal size. Strictly drive-in stuff with a budget to match but John Hoyt gives it everything he’s got as the wacko professor with the human doll collection.

Magnificent Doll (1946)-Dolley Payne Todd (Ginger Rogers!?) is a young widow living in 17th century Philadelphia when she meets two men with great futures, Aaron Burr (David Niven) and James Madison (Burgess Meredith). Both court her but she picks Madison and from that point on according to this history is decided by two lovesick puppies quarreling over the supposedly Magnificent Doll. Ginger, completely at sea, obviously thinks the way to portray one of the Great Ladies of History is to declaim rather than speak her lines and act as if she were made of wood throughout this stately bore. A horror show of another kind and a real disservice to its subject perhaps the most vibrant, interesting woman of revolutionary times who did have tremendous influence on events just not in the drippy, empty way shown here.

I've seen Child's Play, no surprise, but none of your other picks. I've always kinda avoided Pinocchio's Revenge. I've heard of May, but not whether it was any good until now. I might have to give that one a go.

I love that we matched on May. I've heard of Pinocchio's Revenge but I've never seen it.

We match with Child's Play which I dislike. I haven't seen the other 2 but I remember seeing trailers for Pinocchio which looked quite cheesy.

@joel65913-I haven't seen those films though Magic seems like the most interesting.

@Wendell-I'd check out May. It's a very interesting film.

@Brittani-Pinocchio's Revenge is pretty mediocre but if you have very low expectations. You might enjoy it.

@Birgit-Pinocchio's Revenge is cheesy and silly but it's often what is expected with these low-budget B-movies.