For the 25th week of 2018 as part of Wandering Through the Shelves' Thursday Movie Picks series hosted by Wanderer. The subject is on juvenile delinquents. Kids who are troubled and acting out as they get themselves in trouble as a way to escape whatever problems they’re having at home or at school. It’s often a complicated subject yet it often create some compelling films. Here are my three picks: 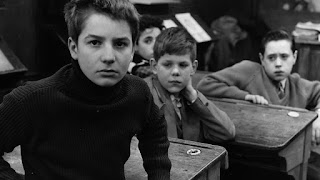 Francois Truffaut’s feature-length debut film is definitely one of the finest films of the 20th Century as it explores the journey of Antoine Doinel. A young boy who is having trouble at school and at home as he spends a lot of time playing hooky where he would also see his mother with another man. This leads to the boy acting out and do all sorts of things but also face revelations about himself and his family life that would have Doinel deal with his many issues for next several years into three more films and a short as it is this film that remains one of Truffaut’s best. 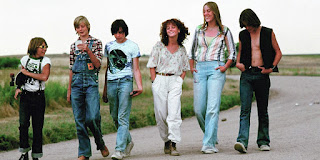 A film that didn’t get a lot of appreciation upon its initial release in 1979, Jonathan Kaplan’s film about a group of kids rebelling against their parents and authorities over plans to destroy the recreational center for an industrial park instead of a cinema and roller rink. Along with an abusive policeman giving the kids a lot of shit, it leads to this moment of chaos and rebellion as it is an intense film that really meant a lot of those who grew up during the 1980s who were angry over the world of Ronald Reagan. 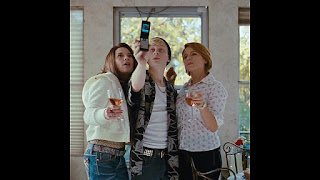 From Xavier Dolan comes one of the best films of the 21st Century so far as it is about a young teenager who has ADHD as he has trouble trying to be normal as he’s angry, destructive, and unpredictable as his mother seeks the help of a neighbor in trying to help him. It’s an unconventional drama that is set in a world that features a fictional law that relate to troubled children where they have to be sent to hospitals if they become unruly or harm their parent. It’s really a character study in which a woman is eager to hope for the best for her son with the help of this insecure schoolteacher as the three become this unlikely family dynamic that wouldn’t last for long. It is a film with an unconventional presentation that definitely works as it would play into the evolution of these characters and the situations they’re in as it is a crowning achievement for Xavier Dolan.

The 400 Blows and Mommy are both phenomenal. Great picks. Haven't seen Over the Edge, but I should.

I love 400 Blows and thought it was funny, sad, and compelling throughout the film. The young actor was great as the main character. I don’t know your second pick. Your 3rd pick would make Drew proud (I miss his blogging) and rightfully so. This is a brilliant film and so touching and tough to see because your heart goes out to all 3. My hubby has severe ADHD and it’s not easy

The 400 Blows is an insightful, terrific film.

I didn't like Over the Edge at all though it was interesting to see how Matt Dillon made that connection with the camera right away.

I really must buckle down and watch Mommy, its been on my list for a long time. I was much more motivated to give it a look when Drew was singing its praises (like Birgit I miss his blog very much) but since he closed up shop it keeps getting bumped down.

I went on a kitschy path with my first three that all go the sensationalist route so popular with the drive-in crowd when they were made but included my much more sober last choice for a bit of balance.

Youth Runs Wild (1944)-While Mom and Dad are busy at the production plants making the tools to win WWII the kids are home and being neglected and the first thing you know “Youth Runs Wild!!!!” Horror meister Val Lewton (Cat People, I Walked with a Zombie) produced, though disavowed this studio reworked version, this mild teen rebellion film where the biggest sins are tire swiping and other minor infractions until a rather violent conclusion. Still somewhat surprising to see this type of film in the 40’s where young people were almost always presented as sweet, compliant angels.

High School Hellcats (1958)-Joyce (Yvonne Lime) is the new girl in school and on her first day she is confronted by Connie (Jana Lund) the leader of the Hellcat gang. Connie tells her she can join the gang or be ostracized and we’re off on a round of shoplifting, kissing parties and murder! Starts off as a mild little cautionary tale but considering there’s a body count it goes on a wilder ride than expected. The kind of film to be found at the local drive-in in the 50’s.

Look in Any Window (1961)-Teen idol Paul Anka plays “The Masked Prowler” a teen Peeping Tom who scales the fences of town residents wearing a frightening mask while his parents and their neighbors drink and carouse amongst themselves ignoring their children. Sensationalist with mostly over the top performances (though Ruth Roman is good as Anka’s mother) but Anka’s compulsion to voyeurism feels disturbingly prescient of an incipient serial killer or rapist.

The Young Stranger (1957)-Rebellious well to do teenager Hal (James MacArthur), a decent boy at heart, is arrested for punching a theatre manager at a movie theater which he truthfully claims was self-defense. The problems begin when Hal’s father (James Daly), an inattentive parent at best, doesn’t believe him leading to an even further estrangement and Hal acting out. Tom’s mother (Kim Hunter) tries to forge some sort of understanding between them before their hostility leads to worse issues. John Frankenheimer’s (The Manchurian Candidate) first theatrical film is an even handed account of the isolation and antipathy that often leads to juvenile delinquency.

I’m ashamed to say I haven’t seen any of these movies. But they all sound amazing.

@Wendell-Over the Edge isn't an easy film to find but I remember seeing it in my teens and it definitely affected me as someone that was angry like all teenagers.

@Birgit-I miss Drew as well. What happened to him?

@joel5913-I haven't seen your choices as I went for more personal choices. I could see why you probably weren't into Over the Edge as I think it could be a generational thing. For those of us who were part of Generation X definitely related to that film.

@vinnieh-See these films. They're all awesome but The 400 Blows is the one that everyone needs to see.

400 Blows is the only one I've seen but it was soooo long ago, I can't remember anything...except I think the last scene where the boy walks on the beach.

@Wanderer-I think it's time to see it again as that last shot is iconic.