For the 26th week of 2018 as part of Wandering Through the Shelves' Thursday Movie Picks series hosted by Wanderer. We venture into the world of television with the TV spinoffs. Shows that came from other successful shows where it allows a certain character to be seen more where it can lead to moments of success or moments of failure. This list is based on the latter so here are my three picks:

I love Married… with Children. I miss that show for all of its politically incorrect humor as well as the fact that it featured gorgeous women in that show including Peggy and Kelly Bundy. This spin-off involved a friend of the Bundys in the Verduccis starring the late, great Joseph Bologna and pre-Friends Matt LeBlanc as a father-son duo trying to embark on quick-rich schemes that never works out. While it would have guest appearances from Al, Bud, and Kelly Bundy and also featured Rita Moreno as a love interest for Bologna and Joey Lauren Adams as a cute neighbor with a thing for LeBlanc. It never really clicked as it only lasted seven episodes and produced another lame spin-off in Vinnie & Bobby (I never saw it). 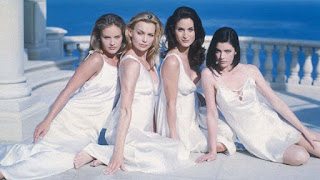 Anyone who lived through the 90s must’ve seen Beverly Hills 90210 and its spin-off Melrose Place as the latter was just a fun, overly-dramatic show with lots of gorgeous women and other crazy shit. Then there was its spin-off as it was based on Heather Locklear’s mother played by Linda Gray who runs a modeling agency. While it featured pre-fame Carrie-Ann Moss and Garcelle Beauvais in key roles and would later include Emma Samms. It was not a good show as some of the actresses who played the models can’t act for shit. Some of the dramatic storylines was fucking stupid and it thankfully got cancelled before it got to its ending which was aired years later as it was clear Aaron Spelling just gave up on and put a bullet in its fucking head. 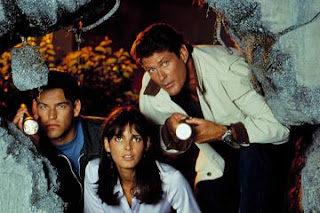 Any straight male who watched Baywatch obviously watched that show for two big reasons. Sure, David Hasselhoff was cool but it was about those two big reasons. Then there was its spin-off which had Hasselhoff’s character who was a lifeguard by day but a private detective at night. Wow, it was lame. Sure, Baywatch wasn’t high-brow television but it at least served a purpose for those who weren’t old enough to watch porn. This show with all of its attempt in suspense and mystery, despite featuring a pre-fame Angie Harmon and the velvety-smooth Lou Rawls, was just total shit. It tried to take itself seriously which is not what Baywatch is. Baywatch is about… well…

I haven't seen any of these. I didn't know Baywatch Nights was a thing either until today. The more you know. lol

Married...with Children is an all-time great, but I stayed far away from Top of the Heap. Also avoided Models, but to be honest I wasn't a fan of 90210 or Melrose Place.

As you know, we match on Baywatch Nights. I mean, how stupid was it to make that show and leave out those two reasons? Big reasons.

I haven't seen the first but I did see a few (a very few) episodes of Models, Inc. Linda Grey tried to give it some dignity but it was a losing battle. Baywatch Nights was an asinine idea that any third grader could have told them was going to land with a huge flop.

So many ways to go with this, I just decided to choose three that we're successfully spun off and turned out to be quality shows in the long run.

Maude (1972-1978)-Topical comedy of liberal feminist Maude Findlay (Beatrice Arthur) living in Tuckahoe, NY with 4th husband Walter (Bill Macy), divorced daughter Carol (Adrienne Barbeau) and Carol’s son Phillip and the social issues that she outspokenly debates with best friend Vivien (Rue McClanahan-playing a character very close to Golden Girls Rose Nyland), housekeepers Florida Evans (Esther Rolle-who eventually was spun off onto her own show Good Times), tippling Englishwoman Mrs. Naugatuck and her prig of a neighbor Dr. Arthur Harmon (Conrad Bain). While geared to comedy this tackled serious hot button issues such as abortion, alcoholism, facelifts, nervous disorders and prescription drug addiction. Maude was introduced as Edith Bunker’s cousin and Archie Bunker’s nemesis on Norman Lear’s groundbreaking “All in the Family” and proved so popular she was spun off to her own wildly popular show.

Lou Grant (1977-1982)-Continuing his character from the iconic Mary Tyler Moore show Edward Asner takes Lou Grant from the cozy hilarity of the Minneapolis WJM-TV to the far more serious drama of the daily newsroom of the Los Angeles Tribune. Working closely with his two strongest reporters Joe Rossi and Billie Newman (Robert Walden & Linda Kelsey), managing editor Charles Hume (Mason Adams) and the paper’s publisher Margaret Pynchon (the great Nancy Marchand) they cover various stories each week. One of the very few shows to move a sitcom character to a dramatic setting successfully this became another awards magnet winning multiple Emmys including Outstanding Drama as well as for Asner who became the first performer to win the statue for the same character in both comedy and drama.

Frasier (1993-2004)-When the sitcom Cheers closed up shop in 1993 hard luck psychiatrist Frasier Crane (Kelsey Grammer) packed up his bags and moved from Boston back home to his native Seattle and became a radio shrink for 11 eventful seasons. He deals with life with his father-retired cop Martin (John Mahoney), dad’s live-in physical therapist-the somewhat psychic Daphne Moon (Jane Leeves), his fun-loving show producer Roz (Peri Gilpin) and persnickety brother Niles (David Hyde Pierce) a psychiatrist as well. There’s also his perpetually unsuccessful love life including occasional drop-ins from his severe ex-wife Lilith (Bebe Neuwirth-another Cheers alum). Full of expert writing, superior comic performers and a satellite cast of daffy, endearing and hysterical characters (brash sportscaster Bulldog Briscoe, fussy food critic Gil Chesterton, Niles never seen but wildly eccentric wife Maris, and best of all Frasier’s agent Bebe Glazer-a woman totally without shame or scruple) this was as strong when it ended as when it began because the characters evolved over the season while remaining true to their original intent.

I loved Married with Children but didn’t know they had a spin-off. I remember Models Inc and made sure to avoid it as well as The Hoff. Why the Krauts love him, I have no clue...I can say Kraut because I’m a proud Canadian but also proud of my German heritage. Baywatch was the #1 show in Germany as well probably because of the tits and ass....you know, Pamela Anderson and The Hoff.