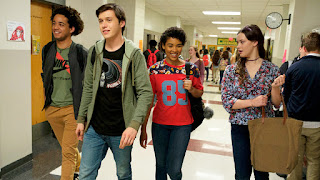 Based on the novel Simon vs. the Homo Sapiens Agenda by Becky Albertalli, Love, Simon is the story of a closeted high schooler who is trying to find the identity of a classmate who has fallen in love with him while trying to come out to his family and friends and deal with someone threatening to reveal his secret. Directed by Greg Berlanti and screenplay by Isaac Aptaker and Elizabeth Berger, the film is an exploration of a young man trying to discover himself during a time in his life as he questions what those close to him would think about him being possibly gay. Starring Nick Robinson, Katherine Langford, Alexandra Shipp, Logan Miller, Tony Hale, Josh Duhamel, and Jennifer Garner. Love, Simon is a heartwarming and riveting film from Greg Berlanti.

A high school senior who seems to have it all finds himself confused about his identity after reading a post about a classmate who is struggling to come out of the closet prompting him to find out that person’s identity as well as wonder when to come out to friends and family. It’s a film about a young man trying to discover more about himself as well as falling for another young man who has chosen to remain anonymous as they both cope with idea of coming out. The film’s screenplay by Isaac Aptaker and Elizabeth Berger follows the young life of Simon Spier (Nick Robinson) who is just a typical kid that has friends and a nice family but is dealing with the fact that he might be gay through this blog post where a classmate is struggling to come out. For Simon, he tries to figure out that person’s identity yet another classmate in Martin (Logan Miller) accidentally reads one of Simon’s emails and blackmails him so that he can get a chance to go out with one of Simon’s friends in Abby (Alexandra Shipp) whom Simon had met just six months ago.

The script also play into the anxieties of Simon wanting to tell family and friends as the first person he comes out to is Abby who agrees to keep it a secret but has no clue about Martin’s presence. Adding to the chaos is the search for the identity of this classmate known as Blue as Simon would have a few suspicions but he would eventually keep himself away from his friends unintentionally adding to the emotional turmoil he would endure.

Greg Berlanti’s direction is straightforward in terms of its visuals while also playing with the ideas expected in romantic films as well as teen comedies. Shot and set on various locations in and near Atlanta, Berlanti doesn’t try to aim for anything stylish in the visuals or create any sequences that are big to showcase the life of a teenager struggling to come out. While there’s some wide shots that Berlanti uses including for a fantasy musical sequence of Simon imagining having already being out and in college where the whole world is gay. Much of Berlanti’s compositions rely on close-ups and medium shots as well as using some real locations such as a Waffle House for a scene involving Simon, Abby, and Martin as well as a waiter who might be Blue. Even as he would use blue filters to play into the idea of who Blue is as whenever he’s typing things on his laptop. Berlanti also knows how to create that moment of drama as it relates to Simon having to come out and its aftermath where there are some revelations from the people who knew him but also from others who knew him from afar. Yet, Berlanti does instill some heart as it relates to Simon’s discovery about himself without trying to play too much into the typical elements expected in LGBT films and romantic comedies. Overall, Berlanti crafts a riveting and heartfelt film about a high school senior coping with his identity and the mystery of the person who is also struggling to come out.

Cinematographer John Guleserian does excellent work with the film’s cinematography as it is largely straightforward in its lighting and emphasis on natural colors for the daytime exterior scenes along with its usage of bluish filters for the idea of who Blue might be. Editor Harry Jierjian does nice work with the editing as it is largely straightforward including some rhythmic cuts for some key dramatic moments in the film. Production designer Aaron Osborne and set decorator Tasha Clarkson do fantastic work with the interiors of Simon’s family home as well as the school and a few places the characters go to.

Costume designer Eric Daman does terrific work with the Halloween costumes some of the characters wear including the clothes worn for a high school musical performance of Cabaret. Sound editor Donald Sylvester does superb work with the film’s sound in maintaining the raucous atmosphere of high school and in some of the parties as well as quieter scenes in some of the film’s dramatic moments. The film’s music by Rob Simonsen is wonderful for its synthesizer-driven music that harkens to the style of the 1980s as well as contemporary music while music supervisor Season Kent create a soundtrack that consists a mixture of modern pop/electro-pop music as well as older music from the Kinks, Warrant, Jackson 5, Whitney Houston, Bobby Pickett, Brenton Woods, and Violent Femmes.

The casting by Denise Chaiman, Tara Feldstein, and Chase Paris is marvelous as it feature some notable small roles and appearances from Nye Reynolds and Bryson Pitts in their respective roles as the 5 and 10-year old versions of Simon, Skye Mowbray as the younger version of Simon’s younger sister Nora, Natasha Rothwell as the drama teacher Ms. Albright, Clark Moore as the openly-gay student Ethan, Miles Heizer as a drama student whom Simon might think is Blue, Joey Pollari as a Waffle House waiter whom Simon also thinks could be Blue, and Keiyan Lonsdale as the school jock Abraham “Bram” Greenfeld whom Simon befriends as he would think Bram’s real identity is Blue. Tony Hale is terrific as Simon’s vice Principal Mr. Worth as a man who is liked by many for not being too strict yet expresses concern for Simon including a scene where Simon and Ethan are mocked as he lectures the students who mock them showing that he means business. Talitha Bateman is fantastic as Simon’s younger sister Nora who aspires to be a cook as she becomes concerned for her brother as well as knowing more about him than he already knows.

Logan Miller is superb as Martin Addison as a student who blackmails Simon in the hopes of hooking up with Abby where even though he’s a well-meaning person despite holding on to Simon’s secret. Alexandra Shipp and Jorge Lendeborg Jr. are excellent in their respective roles in Abby and Nick as a couple of Simon’s friends who are dealing with the chaos of high school as the former is among the first to learn about Simon’s secret. Jennifer Garner and Josh Duhamel are brilliant in their respective roles as Emily and Jack Spier as Simon and Nora’s parents who notice odd things about Simon while they also cope with the news of his secret with both of them coping with the news. Katherine Langford is amazing as Leah Burke as Simon’s longtime childhood friend who is trying to understand what Simon is dealing with while carrying a secret of her own as it would impact their friendship as well as so much more. Finally, there’s Nick Robinson in a remarkable performance as Simon Spier as a high school senior troubled by his growing sexual identity as he also tries to figure out the identity of a person named Blue as it’s calm and touching performance from Robinson who manages to capture the excitement and fear of coming out.

Love, Simon is a marvelous film from Greg Berlanti that features an incredible leading performance from Nick Robinson. Along with its supporting cast, study of homosexuality and coming out, and its exploration of young love. It’s a film that manages to be engaging as well as be daring at times to showcase the struggles of a young man trying to come out. In the end, Love, Simon is a splendid film from Greg Berlanti.

Love, Simon is such a great movie. I would, however, recommend also reading the book, I liked it even better than the iflm.

I'm going to revisit this one. I liked it, but thought it was just okay. I also feel like I may not have been in the right frame of mind that day for whatever reason.

@ThePunkTheory-I often look at books and films as different mediums though I'm sure the book would have things that are still better than the film.

@Tom-Well, the older music is good though I'm not really fond of today's pop music including ugh... Justin Bieber.

@Wendell-I wouldn't mind re-watching it but if it doesn't work for you the second time around, oh well. I've seen better films but it's still something that young teens should seek out despite their awful taste in music.

Great review! This was one of my favorite movies last year, and one that I rewatch a lot too. It's rare to watch a teen movie that isn't so heavy on the romance or the hero saving the world, and doesn't flesh out the story well. This mainly focuses on Simon, but it also gives other characters a chance to shine too. I loved all of the performances too, but Nick, in particular, was wonderful.

@KatyRochelle-Thank you. It was better than I thought it would be as I do hope it allows younger audiences to be given access to more gay films.