For the 32nd week of 2019 as part of Wandering Through the Shelves' Thursday Movie Picks. We venture into the subject of Mrs. Robinsons from a suggestion by Getter. The subject of older women seducing younger men and all sorts of hilarity occur as well as scandal. Here are my three picks: 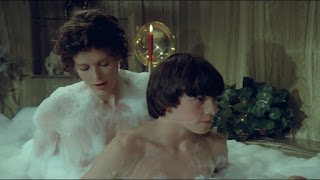 A 1981 sex-comedy about a 15-year old kid who has fallen in love with his French housekeeper who is played by erotic film legend Sylvia Kristel. It’s an OK film where despite the oversaturated usage of music by Rod Stewart, it has some moments that I’m sure a lot of young straight men back then wanted to do with Kristel. Yet, the film is disappointing considering that Kristel used a body double for some parts of the film which totally kills the mood although it’s a film that wouldn’t be made now considering that the woman is older and the boy is underage. 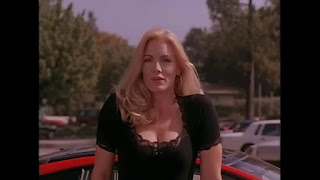 A softcore film classic by Andrew Stevens that he also stars in revolves around a woman whose husband had committed suicide due to business issues as she seeks revenge on her husband’s boss and family after her husband had pimped her out for nothing by pretending to be the boss’ son’s tutor. In the meantime, she fucks the boss’ young son and also seduces the boss’ wife and the boss himself while killing some people along the way. It’s a film that is typical of 1990s softcore films that starred Shannon Tweed yet it is so fun but also so goddamn sexy. 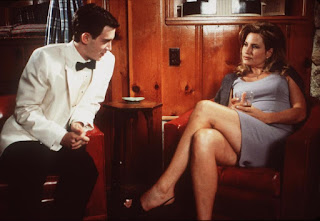 From the Weitz brothers comes the film that sort of brought back the teenage sex comedy before the end of the 20th Century as it included a storyline about one of the four high school seniors who pledges to lose his virginity before the end of high school as he fantasizes about having sex with one of classmate’s mother. During its third act, he would meet that friend’s mother and it’s in this film where the term MILF (mother I’d like to fuck) is invented as she is played by Jennifer Coolidge who would be a regular for the film series (not counting those awful straight-to-DVD fare).

Oh good ole Kristel....I had to laugh when you said a body double was used....hahahaaa. The second film sounds just so bad and I’m glad I missed it. The first American Pie was hilarious and I love Jennifer Coolidge

It's hard to remember a MILF-less world.

Very interesting choices. You're right Private Lessons would never be made today, I do recall a minor hubbub when it was released but nothing to the hue and cry it would receive today. You hit the nail right on the head with Scorned. It existed just to have Shannon Tweed cause mischief and if I remember correctly take off her clothes. Jennifer Coolidge is a comic wonder and was perfect casting in American Pie.

Compared to older men/younger women films the pickins were slim but I still managed to find three I hadn't used before.

Summer of ’42 (1971)-Teen Herman Raucher (Gary Grimes) is spending the titular summer on Nantucket Island with pals Oscy (Jerry Houser) and Benji (Oliver Conant) just after America has joined in World War II. He meets Dorothy (Jennifer O'Neill), a young newlywed whose husband is away in the war. As his friends awkwardly attempt to woo girls their own age, Herman slowly befriends the older woman and finds himself becoming increasingly in love with her, but a sudden tragedy may change everything. Nostalgic and bittersweet this was a huge hit upon its release.

Afterglow (1997)-A roundelay of unwitting changing partners. Contractor Lucky Mann (Nick Nolte) is a serial philanderer who of late has become involved with unhappy young housewife Marianne (Lara Flynn Boyle). Unbeknownst to either Marianne’s business obsessed but equally unhappy husband Jeffrey (Jonny Lee Miller) meets and falls for Lucky’s wife, the troubled Phyllis (Julie Christie) a former minor star who is wrestling with demons of her own. Odd, opaque comic drama but Julie is sensational and was Oscar nominated.

I can't believe I didn't think of American Pie! It's such a perfect fit.

I love American Pie and the thought never crossed my mind to choose it this week.

There's a new film which won the Sundance Audience Award called Queen of Hearts (2019). It ain't no comedy though as it's a realistic drama about a step mother and step son.

@Birgit-As someone that was a teenager in the 1990s, the softcore films of those times really were something as they weren't great films but they were so fun to watch and some of them had were actually pretty good as Scorned is one of those films I liked.

@joel65913-People today are easily offended these days. I'm glad to know there's someone here that appreciates the films of Shannon Tweed. It's a shame she's been married to one of the biggest assholes in the world. White Palace is an excellent film though I really can't stand Susan Sarandon at the moment as I hope would punch her and tell her to shut the fuck up as she has no place to talk about anything at all. Afterglow is severely underrated as I wonder what happened to Alan Rudolph. He hasn't made anything since 2003's The Secret Life of Dentists as I liked that film. Julie Christie... fuck Lara Flynn Boyle and her bone-thin body, give me Christie any day of the week. She's still gorgeous.

@Chris-Oh, thanks for the mention. I'm now adding it to my watchlist.