In the tenth week of 2020 for Wandering Through the Shelves' Thursday Movie Picks. We return to the subject of the seven deadly sins in the theme of gluttony. Defined as an act of over-consumption and over-indulgence, it is considered a sin by eating a lot and withholding food or other things from the needy. Here are my three picks:

1. Willy Wonka and the Chocolate Factory 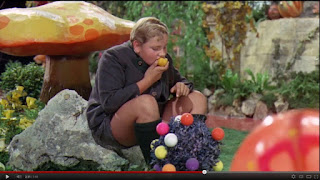 The famed adaptation of Roald Dahl’s novel about a brilliant yet reclusive chocolate maker who opens his factory for a few special guests after years of being closed. One of the five winners of the golden ticket is a fat German kid named Augustus Gloop who not only loves chocolate but also food. He eats too much and upon entering the factory, he is starving as he just eats everything but also drinks the chocolate on the chocolate river until he falls into the river. His character is this representation of gluttony as he would be sucked down into a pipe and nearly become fudge.

2. Monty Python's the Meaning of Life

One of the film’s segments in this subject of life involves an obese character in Mr. Creosote who is portrayed by the film’s director in the late, great Terry Jones. Here is this man that vomits up everything he’s eaten as he’s about to have a large meal as he’s attended to by John Cleese as a waiter and Eric Idle as another waiter carrying the vomit bucket. After he eats this gargantuan meal and drink lots of wine, the waiter offers him a wafer mint to finish. It’s a sketch that plays into the dark humor of gluttony but also what happens when one doesn’t realize when he’s had enough.

3. Austin Powers: The Spy Who Shagged Me

One of the villains that Austin Powers deal with in the 1999 sequel to the 1997 hit spy comedy involves this obese Scotsman known as Fat Bastard who is played by Mike Myers who also plays Powers and the main antagonist Dr. Evil. Here is a guy that will eat anything but also takes massive shits as he also thinks he’s dead sexy. Yet, he also likes to eat babies where he tries to go after Mini-Me and then offers a countertrade of giving Dr. Evil back the money in favor of Mini-Me so he can eat him. It’s a hilarious character who would return for the underwhelming third film as he also reveals the sadness of why he eats so much.

Good choices! I haven't seen Willy Wonka but enjoyed the other two. It's been a while and I forgot about Fat Bastard. 😆

I love this version of Willy Wonka, it was the very first thing that came to mind but I've used it before. The choice of Gene Wilder could not have been more perfect.

I don't always love Monty Python but there are parts of this that I enjoyed. It's a great fit.

I know I saw Austin Powers but I don't have a very strong memory of it.

I struggled a bit with this week’s theme but then happened upon my first pick, which until now I hadn’t known existed. It’s a series of vignettes for each of the sins and it’s provided me with at least one title for each transgression for the rest of the year!

The Magnificent Seven Deadly Sins (1971)-Gluttony: The manufacturer of dietary biscuits Slimmo exhorts that you can exist on 8 of them a day while being a closet glutton with rich food hidden throughout his office. When he inevitably starts to gain weight the company doctor limits him to two biscuits a day but everywhere he looks he sees food! We follow his comic adventures as he tries to sneak whatever tidbits he can. But he pays for it in the end. Co-written by Monty Python’s Graham Chapman.

The Big Feast (aka La Grande Bouffe) (1973)-Four middle aged disenchanted French men of the bourgeoisie (including Marcello Mastroianni and Philippe Noiret) gather at the villa of one of their number with the express goal of eating themselves to death. Looking to indulge to the utmost they include three prostitutes in the party and from then on its food then sex, sex and food, sex while eating food and finally just food and more food. You might never want to eat again once it ends.

Cool Hand Luke (1967)-Non conformist Luke Jackson (Paul Newman) is behind bars on a Florida chain gang but his spirit isn’t imprisoned. While he is a thorn in the side of the guards he becomes a source of inspiration to the other inmates particularly after accepting a spur of the moment bet to eat 50 hard-boiled eggs in an hour. After he achieves the gluttonish goal he lays on a table splayed Christ like suffering but venerated.

OMG I love that you went with The Spy Who Shagged Me. I wish I would've thought of that. Meaning of Life is pretty popular this week, I'll have to check it out.

We match with 2 and i always giggle that the gluttonous ones are always German like the pigs in Shrek. I love Austin powers and this character is so disgusting but so funny. It's toilet humour at its finest.

Great picks! I love that you came up with Monty Python!

I haven't seen this Willy Wonka version but I thought about adding the newer one this week to my list before I thought of another angle. Great picks!

I loved this Willy Wonka version (way more than the Deep one).

@joel65913-Anyone who doesn't like Monty Python is a fucking idiot and doesn't deserve to live.

@Brittani-The Meaning of Life is a mess as not every segment in the film works but the ones that work are unforgettable.

@ThePunkTheory-I always have to go with Python because they're gods.

@Sonia-Same here though I did like Tim Burton's version with Depp though I'm so over Depp as an actor as I just feel like he just doesn't care anymore and has become one of those derp-de-derp guys nowadays.