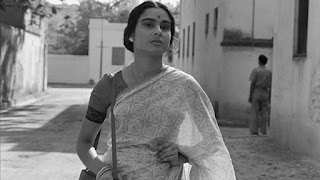 Based on the stories Abataranika and Akinchan by Narendranath Mitra, Mahanagar (The Big City) is the story of a woman who decides to get a job to support her family much to the protests of her bank-clerk husband amidst the struggles of their working class life. Written for the screen, scored, and directed by Satyajit Ray, the film is a study of a woman trying to find her own identity in the modern world during a time of social change in India. Starring Anil Chatterjee, Madhabi Mukherjee, Jaya Bhaduri, Haren Chatterjee, Sefalika Devi, Prasenjit Sarkar, Haradhan Banerjee, and Vicky Redwood. Mahanagar is a riveting and evocative film from Satyajit Ray.

The film follows a family as a housewife decides to take a job to help her family despite her bank-clerk husband’s reluctance as he believes a wife’s place is in the home amidst social changes around them in Calcutta. It’s a film that is set during a time in Calcutta where cities were becoming bigger as this middle-class family is trying to adjust to these changes with the bank clerk’s parents struggling to comprehend everything as his father feels out of step with the changing times. Satyajit Ray’s screenplay follows a simple and straightforward narrative of this family who lived in a cramped home nearby Calcutta as Subrata Mazumdar (Anil Chatterjee) is a bank clerk who is doing well but not enough for his family that includes his wife Arati (Madhabi Mukherjee), their young son Pintu (Prasenjit Sarkar), Subrata’s teenage sister Bani (Jaya Bhaduri), and his parents in Sarojini (Sefalika Devi) and his father in former professor Priyagopal (Haren Chatterjee). Arati suggests in taking a job to help out though Subrata isn’t sure while Priyagopal isn’t fond of the idea.

Taking the job as a door-to-door saleswoman, Arati would find happiness in her work while befriending the Anglo-Indian colleague Edith (Vicky Redwood) who isn’t given a great reputation by their boss Mr. Mukherjee (Haradhan Banerjee) while Arati’s family is also disapproving of the friendship. It’s a small subplot in the film that play into Arati’s own independence as it makes Subrata insecure as he thinks about getting a second job while his father isn’t immediately fond of Arati’s success as he turns to old students for help as he prefers not to speak to his son. Much of these stories take place during the first half of the film as Ray explores one generation’s struggle in these changing times with the younger generation seeing the benefits of these social changes but also some of its faults.

Ray’s direction is mesmerizing for the way he presents the world of late 1950s/early 1960s Calcutta at a time of social changes as it is shot on location in areas in and around Calcutta. Much of the direction at the Mazumdar home is intimate as it play into how small the home is and how cramped to establish Subrata’s need to give his family a better life and a bigger home despite his father’s reluctance to leave. The usage of close-ups and medium shots add to these constraints while there’s looser images in the scenes in the city including the bank that Subrata works at and the posh streets where Arati would get people to buy things. Ray’s usage of wide shots and hand-held cameras add to the splendor yet overwhelming tone of the city as Arati seems to enjoy what it offers. For Priyagopal, the city is just this monster where he’s walking with a cane in need of new glasses and money from former pupils who care about him yet the atmosphere is immense for a simple man like Priyagopal. Also doing the film’s score, Ray uses elements of strings and traditional Indian string and percussive music to help play into the drama as well as creating pieces that help maintain a somber tone where Ray doesn’t dwell too much into melodrama with his music nor with the scenes he creates to play into the struggles that his characters endure.

Notably in the second half as it relates to Subrata who encounters a harsh reality of what is going on socially in Calcutta as he has to rely on his wife’s job for security but also to swallow his pride as a man. Particularly in a scene at a restaurant where he is in the background listening to Arati from afar as she is talking to a client with some lies about her husband with claims that he’s really successful. The third act is about the role of the breadwinner in the family though it’s a role that isn’t easily accepted by Arati as it relates to the fact that she has to take a lot responsibilities while dealing with how badly mistreated Edith is because she’s Anglo-Indian. It all plays into Arati not only thinking of herself but also her husband who realizes what must be done for both of them and their family to share the role of breadwinner. Overall, Ray crafts a touching and rapturous film about a middle-class family trying to adapt to changes and new prospects in Calcutta.

Cinematographer Subrata Mitra does brilliant work with the film’s black-and-white photography as it is largely straightforward with its lighting for the scenes at night inside the Mazumdar home with some lush imagery for the exterior scenes in the day at the posh area of Calcutta. Editor Dulal Dutta does excellent work with the editing as it is straightforward for much of the film with some rhythmic cutting for the dramatic moments. Art director Bansi Chandragupta does amazing work with the look of the homes that the Mazumdar family live in as well as the more refined homes of Priyagopal’s students and the building where Arati works at. The sound work of Atul Chatterjee, Debesh Ghosh, and Sjit Sarkar do superb work with the sound in capturing the atmosphere of the locations as well as the array of sounds surrounding the city to play into its overwhelming nature in contrast to the more subdued posh areas in the city and at the home of the Mazumdar family.

The film’s incredible cast feature notable small roles that include Bibhuti Banerjee, Shyamal Ghosal, and Shailen Mukherjee as a trio of former students of Priyagopal that help him out, Haradhan Banerjee as Arati’s boss Mr. Mukherjee, Prasenjit Sarkar as Subrata and Arati’s young son Pintu, Jaya Bhaduri as Subrata’s teenage sister Bani, Sefalika Devi as Subrata’s mother Sarojini, and Vicky Redwood as the Anglo-Indian Edith whom Arati befriends as she endures prejudice and questions about her background and worth as a saleswoman. Haren Chatterjee is fantastic as Subrata’s father Priyagopal as a former professor who refuses help from his daughter-in-law in his belief to do things himself despite being an old man while feeling ashamed that Arati is the breadwinner as it plays into a man whose ideals have now become irrelevant.

Anil Chatterjee is remarkable as Subrata as a bank clerk who was the primary breadwinner of his family as he tries to help out as he is reluctant to let his wife work only to lose some pride and later appreciation from his father where he later copes with circumstances beyond his control. Finally, there’s Madhabi Mukherjee in a phenomenal performance as Arati Mazumdar as a housewife who decides to take a job to help her family where she finds a sense of freedom and sense of pride while dealing with some of its faults as well as injustices around her as it is a radiant and graceful performance from Mukherjee.

Mahanagar is an outstanding film from Satyajit Ray that features great performances from Anil Chatterjee and Madhabi Mukherjee. Along with its themes of social changes as well as women’s role in these changes as well as its visuals and Ray’s eerie music score. The film is a fascinating study of social changes that is emerging in late 1950s/early 1960s India and how women prosper with these changes despite some of its faults as well as its look into racism towards mixed-races in the country. In the end, Mahanagar is a tremendous film from Satyajit Ray.

I dropped this in my Netflix queue after reading this review, it sounds great!

@Brittani-I think it's in the Criterion Channel and it's available on DVD/Blu-Ray from Criterion as it is worth seeking out as I think more people need to see the films of Satyajit Ray as the DVD/Blu-Ray has another film in The Coward as an extra which I'll see later this year.

@Wendell-There's so much out there as I would like to see more African films. More films from countries that have something to say. Even in the Third World. Part of what I love about watching films and writing about them is to find films from other parts of the world. It gives me great joy to show what is out there as I would love to find gems around the world and share it with other people. I've only now seen seven films by Satyajit Ray so far as if I was to suggest what's the best film to start with. It's Pather Panchali.