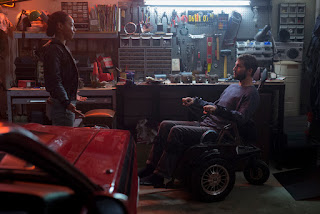 Written and directed by Leigh Whannell, Upgrade is the story of a technophobe who barely survives a mugging as he’s implanted a chip into his body in an act of revenge and terror. The film is a revenge film of sorts of a man whose aversion to technology forces him to use it to get what he wants as well as make things right in the modern world. Starring Logan Marshall-Green, Betty Gabriel, and Harrison Gilbertson. Upgrade is a riveting and exhilarating film from Leigh Whannell.

Set in a futuristic world where technology does a lot for civilization, the film revolves around a technophobic man who survived a car accident and a mugging that left his wife dead as he is given a new chip into his body where the chip gives the ability move again but also to kill those who killed his wife. It’s a film with a simple premise yet it plays into a man who has no interest in technology in favor of doing things by hand as he finds himself conversing with the microchip inside his body as it repaired his paralysis yet it would also help him deal with the people who killed his wife. Leigh Whannell’s screenplay follows the trials and tribulations that Grey Trace (Logan Marshall-Green) endures as he is someone not in tune with modern technology and the modern world as he would finish building a car for a young yet reclusive tech genius in Eron Keen (Harold Gilbertson) who has created a microchip that is used for multiple purposes as Trace and his wife Asha (Melanie Vallejo) witness.

Yet, due to their car malfunctioning that lead to them being mugged and Asha killed. Keen offers Trace the chance to walk and have movement in his body in total secrecy from the police and many others. Trace is excited about having to move his body again but hearing the voice of the chip known as STEM (voice of Simon Maiden) who would help Trace find out what is going on but also give him the ability to find out what happened on that night.

Whannell’s direction is stylish as it is shot on location in Melbourne, Australia as this futuristic city of sorts to play into a world where technology runs the world as people have the cars do the driving for them as well as do all sorts of things though there’s some that prefer to do everything themselves. Whannell showcases a world where it does feel futuristic but not everyone wants to change with the times as Trace is someone that isn’t fond of technology despite being surrounded by it in his home as much of the presentation of the dramatic and character-building moments are shown in a simple manner of medium shots and close-ups. There are wide shots to help establish the locations as well as to showcase the world that Trace encounters including Keen’s secretive home and Trace’s own home. Whannell’s approach to the action and suspense does have elements of style that has Trace move as if he is a robot whenever he’s being threatened. The way the camera moves add to the robotic tone of the film while it also doesn’t shy into the extremity of the violence.

Whannell also create some unique tracking shots with the Steadicam for a chase scene involving Trace and a man who was involved in the mugging. Whannell’s direction does go into great care of the suspense while it also dwells into the realm of body horror as its third act is about Trace and STEM as well as some eerie discoveries over the latter’s creation just as some of their actions get the attention of Detective Cortez (Betty Gabriel) who is concerned about Trace as well as what is actually happening. Whannell would create a twist in the story that plays more into what Keen has created and the dangers that he brought to Trace as it all relates to Trace’s disdain for technology. Overall, Whannell crafts a thrilling and gripping film about a technophobe who is given a computer chip that allows his paralyzed body to seek revenge on the men who killed his wife.

Cinematographer Stefan Duscio does excellent work with the film’s cinematography with its emphasis on stylish low-key lighting for many of the interior/exterior scenes set at night with not a lot of bright lights for the scenes set in the day. Editor Andy Canny does terrific work with the editing as it has some stylish cuts to play into the action while not deviating into the style of chaotic-speed cutting in order to make sense of what is happening. Production designer Felicity Abbott, along with set decorator Katie Sharrock and art director Mandi Bialek-Wester, does brilliant work with the look of the homes of the characters as well as the design of some of the futuristic gadgets that people use. Costume designer Maria Pattison does nice work with the costumes as it is largely straightforward with the exception of Keen who wears more fashionably posh clothing.

Hair/makeup designer Chiara Tripodi does fantastic work with the look of a few characters as it play into an array of different hairstyles and tattoos some of the characters that Trace meets wears. Special effects supervisor Angelo Sahin and visual effects supervisor Jonathan Dearing do incredible work with the visual effects from the design of the police drones as well as some of the tech that is used at home. Sound designer P.K. Hooker does superb work with the sound effects in the way some of the technology sounds as well as the sound of weapons some of the bad guys have in them. The film’s music by Jed Palmer is amazing for its brooding and pulsating electronic-based score as it help play into the suspense as well as the action sequences in the film while music supervisor Jemma Burns creates a soundtrack that consists of a couple of electronic cuts by Kollaps and a blues song by Howlin’ Wolf in the film’s opening scene.

The casting by Nikki Barrett and Terri Taylor is wonderful as it feature some notable small roles and appearances from Richard Crawthorne as a criminal in Serk Brantner, Kai Bradley as a hacker named Jamie, Christopher Kirby and Clayton Jacobson as a couple of thugs in Tolan and Manny respectively, Linda Cropper as Trace’s mother, and Melanie Vallejo in a terrific performance as Trace’s wife Asha who becomes the motive for Trace’s vengeance. Benedict Hardie is fantastic as Serk’s brother Fisk as a mysterious criminal who carries secret weapons in his body as it play into intrigue over why Asha was killed. Harrison Gilbertson is excellent as the young yet reclusive tech genius Eron Keen as a man who has created a chip that he believes will change everything while offering to help Trace in repairing his paralyzed body unaware of the chip’s unlimited potential.

The voice of Simon Maiden as STEM is brilliant as he displays some life into this computer chip that is allowed to do many things including getting Trace to walk and move again while offering advice of what to do and such as it’s a complex voice performance from Maiden who manages to bring a lot of depth into a tiny chip. Betty Gabriel is amazing as Detective Cortez as a homicide detective investigating what happened to Trace and his wife as she also suspects about something off as it relates to some recent criminal activities as she’s kind of the film’s conscience. Finally, there’s Logan Marshall-Green in an incredible performance as Grey Trace as a mechanic who isn’t fond of modern technology as he becomes paralyzed following a mugging and the murder of his wife as he is given a chip that allows his body to move again where Marshall-Green displays the air of loss and confusion that he endures as a chip controls his movements as he also copes with some of the things he does as it a career-defining performance for Marshall-Green.

Upgrade is a remarkable film from Leigh Whannell that features a great leading performance from Logan Marshall-Green. Along with its stylish visuals, futuristic setting, themes on the dangers of technology and artificial intelligence, and a chilling electronic music score. The film is a crafty genre-bender that offers a lot of action, terror, and suspense while exploring a man trying to get revenge for what happened to him and his wife. In the end, Upgrade is a marvelous film from Leigh Whannell.

This film was a lot better than it had any right to be. I was surprised by it.

This sounds like it's worth tracking down. I've tended to like Leigh Whannell's work in general because it often works better on screen than it looks like it will on paper.

@Brittani-It surprised me as well as I was also entertained by it as it was better than it had any right to be.

@SJHoneywell-It seems like he has an understanding of what to do but also find ways to tell that story visually and really show there's a lot more out there no matter what limitations he has as it makes me more intrigued to see his take on The Invisible Man.

So glad you enjoyed this! I have the bloggers to thank for giving me the push to watch it because it doesn't sound that great on paper. It was a delightful surprise!

@Often Off Topic-It was on HBO and I decided to watch it on my DVR as it was just fucking incredible from start to finish. On paper, it sounded like an OK idea but its execution was solid.

This movie is sooooo fun. Glad you enjoyed it.

@Wendell-It totally was man. I fucking loved it.