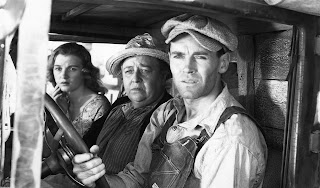 Based on the novel by John Steinbeck, The Grapes of Wrath is the story of a family who deal with the loss of their farm during the Great Depression as they move to California to become migrant workers as they deal with the new reality of their lives. Directed by John Ford and screenplay by Nunnally Johnson, the film is an exploration of a family dealing with a loss that is bigger than themselves as they struggle to adapt to their new reality as they also learn they’re not alone in what had been lost. Starring Henry Fonda, Jane Darwell, John Carradine, Dorris Bowdon, John Qualen, and Eddie Quillan. The Grapes of Wrath is a haunting yet majestic film from John Ford.

The film revolves around a farming family who had lost their land due to the circumstances of the Great Depression as they move from their home in Oklahoma to California to become migrant workers as they deal with not just the harsh reality of their situation but also the fact in how mistreated they are as well as many others who are going through similar situations. It’s a film that follows this family as they deal with not just losing their land that they lived for many years but also trying to start a new life that has little to offer as they’re forced to go on the road. Nunnally Johnson’s screenplay is largely straightforward as it is told largely through the perspective of Tom Joad (Henry Fonda) as a man who had just been paroled from prison after a four-year stint for killing a man in a fight as he returns to his family home to realize it had been abandoned with his parents living at his uncle’s home with the rest of the family. The first act is about the Joad family and Tom’s discovery of what is happening as old family friend Muley Graves (John Qualen) reveals what happened to him as his family had already left for California and why the Joad family has decided to move to California.

The trip from Oklahoma to California would be one of loss, revelation, and adversity as the Joad family would also learn that a lot of people as far as Arkansas have been making the journey to California and have suffered the same trials and tribulations the Joad had endured. Joining the Joad in this road trip is the former preacher Jim Casy (John Carradine) who would have his own revelations of his own in what he sees as it relates to the injustices migrant workers have to face such as wages being decreased and not having a lot of say in what they can do. There are also these moments where there are characters who have to do things they’re not proud of for money as it play into Tom’s own awareness of what is happening as he would go into his own revelations in the film’s third act upon the moment he and his family would go to work camps as it is more about the quality of life and the needs of those who want to work and have a good life.

John Ford’s direction doesn’t aim for anything glossy nor wanting to romanticize the period of the Great Depression as he just goes full-tilt into the harshness of the Dust Bowl and life in the American Midwest and in California during these tough times. Shot on various locations in Oklahoma, New Mexico, Arizona, and California and on the legendary Route 66 which is a major character in the film. Ford uses the wide shots to get a scope of these locations but also in this idea that California is this land of promise though Grandma Joad (Zeffie Tilbury) has a different opinion. Ford also play into this optimism that is carried in the film but it does get replaced with an air of cynicism until he finds a balance between the two as it would play into Tom’s development. Even as he is someone that already has a criminal record and can be short-tempered who is trying to maintain control but starts to seethe in rage over the injustices that is happening around him.

Ford’s usage of the medium shots and close-ups also play into a lot of the drama including a conversation with a former migrant worker who left California as he reveals what the Joads would face as the reality of their surroundings and these camps are in terrible condition. Ford would often have scenes on the road as well as a shot of the Joads driving through these camps as it has this stark tone that feels real as opposed to something extravagant that would expected in a Hollywood film. The direction also has Ford play into this idea of communism but it’s only briefly hinted as it is more about Tom and what he sees as well as the need for not wanting any more trouble. Still, he can’t un-see all of the injustice he suffers as the film does have bleak elements but Ford provides these touching moments that are defiant in the human spirit. Overall, Ford crafts a visceral yet rapturous film about a farming family moving to California to find a new life during the Great Depression.

Cinematographer Greg Toland does incredible work with the film’s black-and-white photography as it play into this stark naturalism of some of the scenes in the camps as well as its usage of available and low-key light as well as shadows for some of the interior/exterior scenes set at night as it is a major highlight of the film. Editor Robert L. Simpson does amazing work with the editing as it is largely straightforward yet it allows shots to play into some of the drama and suspense while maintaining a rhythm to help heighten up some intense moments. Art directors Richard Day and Mark-Lee Kirk, with set decorator Thomas Little, do brilliant work with the look of the camps as well as the homes of the Joad as well as the agriculture camp in the third act

Costume designer Gwen Wakeling does fantastic work with the costumes as it play into the ragged look of the characters as well as a refined look for some of the people in authority. The sound work of Roger Heman Sr., Edmund H. Hansen, and George Leverett do superb work with the sound as it play into the atmosphere of the locations as well as sounds of trains and gunfire as it help play into the suspense. The film’s music by Alfred Newman is terrific for its usage of folk-inspired instruments as much of the score is based on the traditional song Red River Valley with the accordion and harmonium as the basis for the score while its music soundtrack largely consists of folk songs of the time with consultation from the folk music legend Woody Guthrie.

The film’s wonderful ensemble cast as it feature some notable small roles from Ward Bond as a policeman, Selmer Jackson as an inspection officer, Joseph Sawyer as a ranch foreman, John Arledge as a young man who drives a caterpillar tractor to destroy Graves’ home because he needs the money, Daryl Hickman and Shirley Mills in their respective roles as the young Joad children in Winfield and Ruthie, Frank Darien as Uncle John Joad, Frank Sully as John’s son Noah, Zeffie Tilbury and Charley Grapewin in their respective roles as Grandma and Grandpa Joad, Eddie Quillan as Rose’s husband Connie, and O.Z. Whitehead as Tom’s younger brother Al. John Qualen is superb as family neighbor Muley Graves as a man who had lost his home and had been hiding at the old Joad home as he deals with what he lost and why he has no interest in going to California. Russell Simpson is superb as Pa Joad as a man who is filled with hope and optimism about going to California as he is forced to deal with reality while trying to maintain some hope for everyone else in the family.

Dorris Bowdon is fantastic as Rose of Sharon as Tom’s cousin who is hoping to start a new life as she struggles with her pregnancy but also hopelessness. John Carradine is brilliant as Jim Casy as a former preacher who joins the Joads on the road as he does what he can to help them while also coming to terms with the many injustices he sees in his journey. Jane Darwell is phenomenal as Ma Joad as Tom’s mother who tries to comprehend everything that is happening around her while being this glue to the family as well as a moral compass as there’s a radiance to her performance that includes the film’s final monologue as it just this touching yet powerful moment in the film. Finally, there’s Henry Fonda in a tremendous performance as Tom Joad as a man who had just been paroled as he tries to stay away from trouble as well as help his family any way he can while dealing with a lot of the prejudice and injustice that he sees as he feels compelled to wanting to do something not for himself but for those who are suffering as it is an iconic performance from Fonda.

The Grapes of Wrath is a magnificent film from John Ford that features great performances from Henry Fonda, Jane Darwell, and John Carradine. Along with its supporting ensemble cast, Greg Toland’s ravishing cinematography, emphasis on realism, and its study of inhumanity during the Great Depression. It is a film that explore a period in time when people are trying to find work and survive only to realize that they’re not alone in this endless cycle of movement and having to find work while realizing that they have the power to make their own decisions during those dark times. In the end, The Grapes of Wrath is an outstanding film by John Ford.

Henry Fonda became Henry Fonda with this movie, but for me, it's all about Jane Darwell. Darwell's performance is one of those "If she didn't win an Oscar for that, we should riot" performances.

@SJHoneywell-I haven't seen who else was nominated but I would've been pissed off if she didn't win. She was great in that film and that monologue. Holy shit. That's acting 101 there. And yes, Henry Fonda became a God with that film.

I love the book so much I've never been able to attempt the film.

I haven't seen this either, nor have I read the book....which I always say I'm going to do one day, and that has yet to happen. lol

@Jay-I read that it made changes from the book to the film but it still was faithful though its ending is different than in the book but it's still powerful.

@Brittani-I haven't read the book but then again, books and films are 2 different mediums.

This is a great review and makes me want to watch the movie again. Haven't seen this one for well over 10 years, but I'm so happy you liked it.

@Alex-It was better than I thought it would be as its subject matter not only holds up but it feels more real in relation to what is happening right now with the world. Well, mainly here in Dumbfuck U.S.A.