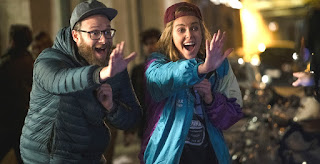 Directed by Jonathan Levine and screenplay by Dan Sterling and Liz Hannah from a story by Sterling, Long Shot is the story of a journalist who accompanies his former babysitter who is now the U.S. Secretary of State as she is mulling a possible run for the U.S. presidency. The film is an offbeat romantic-comedy where a journalist rekindles his friendship with his former babysitter as they also deal with their own feelings for one another just as she is about to step into the spotlight. Starring Seth Rogen, Charlize Theron, Alexander Skarsgard, O’Shea Jackson Jr., June Diane Raphael, Bob Odenkirk, and Andy Serkis. Long Shot is a witty and heartfelt film from Jonathan Levine.

The film revolves around a controversial yet unemployed journalist who attends a fundraiser where he meets his former babysitter, now U.S. Secretary of State, as they reconnect as he accompanies her on a world tour to push an environmental initiative that she hopes would mean something as she is also thinking about running for the U.S. presidency. It’s a film that has an idealistic journalist who just lost his job after the company he works for had been bought by a media conglomerate as he helps this U.S. government official trying to get many countries to go on board this environmental initiative that she hopes would help the world. The film’s screenplay by Dan Sterling and Liz Hannah explore these two people who knew each other as teens as they’re both at crucial points in their lives where they want to accomplish something but also have to deal with compromises.

For the journalist Fred Flarsky (Seth Rogen), he doesn’t believe in compromise as he lives to expose hypocrisies and such where he is first seen infiltrating a white supremacist group. Then he loses his job when he refuses to compromise and work for the immoral media mogul Parker Wembley (Andy Serkis) who buys the publication Flarsky works for. Flarsky’s former babysitter in Charlotte Field (Charlize Theron) is someone trying to make things happen and other duties expected in her job as she learns that U.S. President Chambers (Bob Odenkirk) is not seeking re-election as the former TV actor wants to go into films. Upon meeting Flarsky at a fundraiser whom she remembered as a teenager, she decides to hire him as her speechwriter despite the advice of her chief of staff Maggie (June Diane Raphael) who thinks that Flarsky is a slob. Yet, Flarsky would inspire Field to push her initiative as well as loosen up a bit while Flarsky learns that life is full of compromises and be less judgmental just as the two are to reach a crucial point in their lives.

Jonathan Levine’s direction is largely straightforward as it play into this whirlwind journey of two people who knew each other as teens as well as to try and do some good in the world. Shot largely in Montreal and Cartagena, Colombia with some shots in New York City, Levine doesn’t go for a lot of style in order to tell this simple story while also playing into some of the things that Flarsky would do as a journalist starting with his infiltration at a white supremacist group. While there are some wide and medium shots to establish some of the locations, Levine does create some unique compositions as it play into some of the humor such as Flarsky being humiliated in wearing a traditional Swedish suit suggested by Maggie as he is outside of a palace smoking a cigarette and not feeling happy. There are also moments that are stylized such as a terrorist attack that also plays for laughs including a scene of Field, high on the influence of drugs, negotiating with a world leader over the release of a hostage.

Levine also does some satire as it relates to the Wembley character as he also runs a fake news channel similar to Fox News as he is someone that would play a key role in trying to influence Field in its third act. It play into this dark world of politics as it does go into conventional territory but also some character-revelatory moments for both Field and Flarsky. The latter of which has often been clouded by his own morals and idealism as he has to realize what Field had to do to not just succeed but also to make serious changes for the world. Levine does manage to play with the conventions but also find ways to create a resolution that allow both Field and Flarsky to find a common ground to be together on all-levels without compromising their own beliefs and feelings for one another. Overall, Levine crafts a funny yet endearing film about an unemployed journalist who reconnects with his former babysitter as she deals with possibility of becoming the next U.S. president.

Cinematographer Yves Belanger does excellent work with the cinematography as its usage of low-key lighting for some of the scenes at night give the film a unique tone in its look while being straightforward for the daytime interior/exterior scenes. Editors Melissa Bretherton and Evan Henke do terrific work with the editing as it has a few stylish moments in a montage sequence and a slow-motion part of the film as much of it is straightforward. Production designer Kalina Ivanov, with set decorator Manon Lemay plus art directors Sharon Davis, Donna Noonan, and Zoe Sakellaropoulo, does fantastic work with the look of some of the places that Flarsky and Field stay at around the world as well as Flarsky’s messy apartment and Field’s clean home. Costume designer Mary E. Vogt does nice work with the clothes that the characters wear including some of casual look of Field when she goes out clubbing with Flarsky.

Special effects makeup artists Bruno Gatien and Jonathan Lavallee do amazing work with the look of the Wembley character in the way he looks like certain political figures in the conservative world. Special effects supervisor Mario Dumont and visual effects supervisor Dan Schrecker do brilliant work with the terrorist attack sequence as well as some bits of set dressing for some of the locations. Sound designer Ando Johnson and sound editor Branden Spencer do superb work with the sound as it play into the atmosphere of the locations as well as quiet moments in the film that add to some of low-key comical moments that occur in the film. The film’s music by Marco Beltrami and Miles Hankins is wonderful for its usage of strings and electronics to play into some of the humor and drama while music supervisor Gabe Hilfer creates a fun soundtrack that features music from Boyz II Men, the Cure, Roxette, Thunderfist, Sonny Rollins, DMX, Cameo, Blondie, Big Thief, Bruce Springsteen, Frank Ocean, Robyn, the Crystals, Aretha Franklin, Big Boi with Troze, and the Tango Project.

The film’s marvelous ensemble cast feature some notable small roles and cameo appearances from Boyz II Men as themselves, Lisa Kudrow as a polling expert, Lil’ Yachty as himself, Randall Park as Flarsky’s boss early in the film, the trio of Kurt Braunohler, Paul Scheer, and Claudia O’Doherty as Wembley News reporters, Ivan Smith as the Indian prime minister who has issues with the U.S., Aviva Mongillo as the young Charlotte, Braxton Herda as the young Fred, Tristan D. Lalla as Field’s bodyguard Agent M who is among the first to witness Flarsky and Field’s romance, Ravi Patel as one of Field’s key staffer in Tom who is close to Field as he also serves as a mediator between her and Flarsky, and Alexander Skarsgard in a hilarious performance as Canadian prime minister James Steward whom Field is romantically-linked to despite the fact they don’t have any chemistry as Skarsgard plays him for laughs while sporting an incredibly bad Canadian accent.

Bob Odenkirk is terrific as the U.S. President Chambers as a former TV star who played the President on TV as he decides to go into movies yet becomes troubled by Field’s initiative as it threatens his own career prospects. Andy Serkis is fantastic as Parker Wembley as this media mogul who likes to push his own ultra-conservative views to the point that he buys Flarsky’s publication and gets him fired while trying to do whatever he can to stop Field and her initiative. O’Shea Jackson Jr. is excellent as Flarsky’s friend Lance as someone who is trying to help but also give him advice while bringing some revelations about himself that would surprise Flarsky and his own faults. June Diane Raphael is brilliant as Maggie Millikins as Field’s right-hand woman who doesn’t like Flarsky much but does realize his value as she sees how it would inspire Field prompting her to be more concerned for Field’s happiness than ambition.

Finally, there’s the duo of Seth Rogen and Charlize Theron in phenomenal performances in their respective roles as Fred Flarsky and Charlotte Field. Rogen brings a laid-back approach to his character but also someone who is an idealist that doesn’t like to compromise and wants to do good things but is often unhappy until he reconnects with Field as he begins to think about a future that isn’t cynical. Theron brings a realism to her character as someone that is hoping to do something that matters but often has to compromise to get what she wants until reconnecting with Flarsky gets her to loosen up and not be compromised. Rogen and Theron do have this chemistry that is endearing but also allow both of them to be funny as well as having Rogen be straight and Theron being the funny one during a scene she’s high on drugs as she’s negotiating with a foreign minister.

Long Shot is an incredible film from Jonathan Levine that features two great performances from Seth Rogen and Charlize Theron. Along with its supporting cast, offbeat take on the romantic-comedy genre, and its exploration of politics and compromising one’s ideals. It is a film that manages to bring in lots of laughs but also a lot of heart and wit that have audiences be engaged by characters wanting to make the world a better place. In the end, Long Shot is a remarkable film from Jonathan Levine.

I'm glad you liked this! I laughed so hard at the 'OHHHH BOYYY!" scene. Still my favorite.

@Brittani-It is a funny film but it also has heart. I like the fact that as great as Charlize is as an actress. She is cool enough to not take herself seriously and be funny. I wouldn't mind seeing her in more comedies.

YES! I love that you liked this one as well. Some of my friends were so confused that I liked this movie, but ah what the hell, I thought it was good!

@Alex-Anyone who didn't think this movie was any good is an idiot. It never takes itself seriously and doesn't need to. Plus, it's a film that gives us regular guys hope as well as the impossible dream. One that Jefferson d'Arcy had thought about when he was married (probably still) to Marcy in Married... with Children. What man wouldn't want to that role? Have the woman rule the world and we get to sit back and be tranquilo.