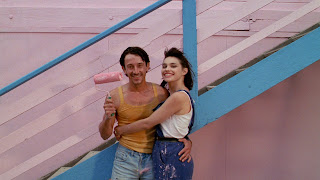 Note: The Following is also a contributing piece to the 2020 Edition of Girl Week hosted by Wendell of Dell on Movies.

Based on the novel 37 2 le matin by Philippe Dijan, Betty Blue is the story of an aspiring novelist who meets a young woman in a beach town in France as they engage into a tumultuous and chaotic affair. Written for the screen and directed by Jean-Jacques Beineix, the film is an exploration of a love affair that goes into great extremes as it relates to this easygoing man and this troubled and erratic young woman. Starring Jean-Hughes Anglade, Beatrice Dalle, Gerard Darmon, Consuelo de Haviland, Clementine Celarie, and Jacques Mathou. Betty Blue is a ravishing yet intense film from Jean-Jacques Beineix.

The film is about a tumultuous love affair between a thirty-something man and a 19-year old woman as they meet in a beach town in France as they would endure a relationship filled with many ups and downs as well as one of immense turmoil. It’s a film that explores this relationship of great extremes of a man who is just trying to find himself and wonders if he can make it as a novelist where he meets this young woman who is wild and energetic but also has these intense mood swings when things go wrong. The film’s screenplay by Jean-Jacques Beineix explores this relationship as it is largely told from the perspective of Zorg (Jean-Hughes Anglade) who meets Betty (Beatrice Dalle) at the beach and immediately begin this love affair that is intense with passion and terror with Zorg narrating his own experiences with Betty. Their time at the beach town of Gruissan would be brief as they would travel to Paris and later the French countryside town of Marvejols where they try to find a stable life and opportunities with Zorg hoping to be published by the manuscript Betty had created for him. They would also meet an assortment of people who would drive their relationship to new highs and new lows.

Beineix’s direction has elements of style in the compositions he creates yet there is also something entrancing in his overall presentation as it is shot on these different locations in Gruissan, Paris, and Marvejols as they all represent the wild mood swings of Betty and the journey that she and Zorg would take. Beineix’s wide shots and usage of tracking shots add to the beauty of some of the scenery that includes shots in the beaches of Gruissan to a chase scene at night in the streets of Marvejols as it has something that is gripping and unpredictable. There are also these intimate moments in the film with its usage of close-ups and medium shots as it play into the romance with lots of coverage on full-frontal nudity from both Zorg and Betty as the first scene of the film is the two of them having intense sex where it blurs the line of whether the actors are really doing it or faking it real good.

Beineix also maintains this air of danger as it relates to Betty’s unstable behavior whether it’s her throwing things at the bungalow she and Zorg are staying in or just going after a publisher all because he hated Zorg’s book. The film, in its original 185-minute running time, play into this rollercoaster of a relationship as those who observe Betty and Zorg as it includes people in Paris and Marvejols with the latter trying to do what he can to make Betty happy. The film’s third act is about that search for stability and it would happen for a brief moment until something horrific occurs as it play into chaos as well as the role Betty has for Zorg. Yet, Zorg is intent on trying to save her no matter how impulsive, destructive, and delusional she is in this strange yet whirlwind act of love. Overall, Beineix crafts a riveting and exhilarating film about a love affair between a wannabe writer and his young yet wild girlfriend.

Cinematographer Jean-Francois Robin does incredible work with the film’s cinematography as it is a major highlight of the film with its usage of vibrant colors, stylish shading, low-key lighting, and its approach to naturalism for some of the exterior scenes in the day. Editors Monique Prim and Yves Deschamps, with additional work from Marie-Aimee Debril for its original 185-minute cut, does excellent work with the editing as it is largely straightforward in its approach to drama with some jump-cuts to play into the chaotic elements of the film as well as a few slow-motion shots. Production designer Carlos Conti and set decorator Jacques Leguillon do brilliant work with the look of the bungalow that Zorg and Betty were living in as well as re-painting as well as the other homes they would live into play into the progress of their romance. Costume designer Elisabeth Tavernier does fantastic work with the costumes as it help enhance the film’s look whether it’s a red dress that Betty wears or some of the casual yet colorful clothes that Zorg wears.

Hair/makeup designer Judith Gayo does terrific work with the look of Betty in her wild hairstyle as well as a look that she would sport late in the film. The sound work of Pierre Befve and Dominique Hennequin do superb work with the film’s sound as it help play into the atmosphere in how music is sound on location as well as some of the quieter moments in the film. The film’s music by Gabriel Yared is phenomenal as its mixture of soothing saxophone pieces with elements of strings, circus-like music, and other textures is a major highlight of the film as it help play into the drama and chaos.

The casting by Dominique Besnehard is wonderful as it feature some notable small roles and appearances from Dominique Pinon as a drug dealer Zorg meets in a bathroom, Philippe Laudenbach as a posh publisher that Betty beats up, Claude Confortes as the fat and sleazy bungalows proprietor, Jean-Pierre Bisson as a police commissioner Zorg confers with about his own manuscript that was also rejected by pretentious publishers, and Vincent Lindon as a young police officer in Marvejols who isn’t fond of Zorg at first until he realizes that he means well. Jacques Mathou and Clementine Celarie are superb in their respective roles as the husband-and-wife team of Bob and Annie with the former being a friendly markets owner trying to help them out while the latter is a sex-starved woman trying to seduce Zorg every way she can. Consuelo de Haviland is excellent as Betty’s friend Lisa who owns a hotel in Paris where she allows Betty and Zorg to stay for a bit while trying to help Betty any way she can. Gerard Darmon is brilliant as Eddy as Lisa’s boyfriend who owns a pizzeria as he helps Zorg out with publishers while later taking Zorg and Betty to Marvejols for his own reasons as he gives them a new home.

Finally, there’s the duo of Jean-Hughes Anglade and Beatrice Dalle in phenomenal performances in their respective roles as Zorg and Betty. Anglade’s performance has him be this man that is easy-going but also frustrated at times where he escapes through having a good time and drinking yet is also troubled by Betty’s mood swings as it is low-key at times but also has moments of humor. Dalle’s performance as the titular character is a debut performance that is unforgettable in terms of not just this air of charisma and energy but also in displaying this pain and anguish this young woman is dealing with. Even as she would do some violent actions to others as well as herself where there is something dangerous in what Dalle does yet it adds so much to everything she’s doing as she and Anglade also have this chemistry that is just riveting to watch.

Betty Blue is a tremendous film from Jean-Jacques Beineix that features great performances from Jean-Hughes Anglade and Beatrice Dalle. Along with its ravishing visuals, Gabriel Yared’s intoxicating score, themes of love at its most extreme, supporting cast, and its gorgeous locations. The film is definitely a love story that doesn’t play by the rules nor does it shy away from its display of sex and violence as well as its exploration of mental illness and searching for meaning through love. In the end, Betty Blue is an outstanding film from Jean-Jacques Beineix.

Sadly, I've never heard of this one, but it does sound intriguing. The truth is, I'm way behind on my French cinema. Thanks for joining again! I really appreciate it.

My first thought was "yikes at that age difference" but after reading your review and seeing that Roger Ebert had it as one of his "most hated"....I'm intrigued. lol

This is one I've meant to see for years but never quite got around to. I'll have to correct that.

I've seen Betty Blue several times and love it. Thanks for the write-up Steven, maybe others will read your piece and check it out.

@Brittani-The age difference doesn't really matter once you meet Betty and you realize how much of a ball of fire that she is.

@joel65913-I don't know if you'd be into it as this film is quite extreme in its approach to sex.

@Paula Padilla-I hope so. More views would be great.

I have never heard of this before but it sure sounds intriguing. I will check it out.

@Sonia-It is a fascinating film. Long, in its 3-hour director's cut, yet it is worth watching for the performances and its study of identity and desire.

What an astounding performance by Beatrice Dalle who just tears up the screen with her performance. She has such incredible charisma and screen presence. I haven't watched this film in ages but I do remember it staying with me for days afterwards.

@J.D.-Indeed. It is an incredible film and more than just some film that is about sex.