In the 50th week of 2020 for Wandering Through the Shelves' Thursday Movie Picks. We go into the subject of movies for seniors/the elderly as it is clear that they see movies as well yet not a lot of films have been made for or about them. Fortunately, there are people who understand the concept of respect their elders as a reminder that young people are going to grow old too. Here are my three picks:

What happens when a couple of gangsters get released from prison after a 30-year sentence to deal with a new world that is the 80s? Well, if you’re Burt Lancaster and Kirk Douglas who have to take shit from a bunch of dumbass young people, new rules, and being pursued by Eli Wallach over a contract. You just don’t take shit from anyone as it’s a fun comedy where Douglas and Lancaster prove they not only still got it but also do it with charm and wit with Wallach also managing to steal a few moments as it’s just a fun comedy featuring legends. 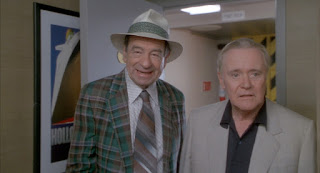 From the often-underappreciated Martha Coolidge comes a buddy comedy starring Walter Matthau and Jack Lemmon about two friends who go on a cruise ship only to realize they’re working as dance hosts to avoid paying for the expensive tickets. It is a light-hearted and charming comedy that has Matthau and Lemmon play off of each other yet it’s the ensemble that adds to the film’s charm that includes Dyan Cannon, Gloria DeHaven, Rue McClanahan, Estelle Harris, Brent Spiner as the sniveling cruise director, Elaine Stritch, and Donald O’Connor where there is a great scene of O’Connor and Stritch having a little dance-off.

Alexander Payne’s 2013 drama about an old man walking to Nebraska in his belief that he’s won millions of dollars is probably one of his best films. Notably as it is sort of a road movie through the state of Nebraska as it features a career-defining performance from Bruce Dern as well as a hilarious supporting performance from June Squibb as Dern’s wife. It is a film that is quite somber as it plays more into a man wanting to leave behind something for his two adult sons as well as dealing with family issues from relatives and those who bear a grudge towards Dern’s character for all of the wrong reasons. Yet, it is still a hopeful film and one where it does show a man trying to maintain some dignity and tell everyone else who wronged him to go fuck themselves.

Kirk and Burt always paired well and it was great to see that age and time didn't diminish their chemistry in Tough Guys, same goes for Alexis Smith who I was delighted to see in this as well.

I still have to catch up with Nebraska but we match on Out to Sea! Not my favorite of the many pictures the duo made but a pleasant bit of fluff that gathered a wonderful cast together.

Aside from our match I went with films that looked at the lighter side of advancing years.

Cocoon (1985)-A group of seniors in a Florida rest home stumble upon a swimming pool that because of an alien "cocoon" hidden within has become a fountain of youth. After taking a dip they are rejuvenated and have a great deal of fun during their second fling at being young. Don Ameche won a Best Supporting Actor Oscar for his role.

Out to Sea (1997)-Charlie and Herb (Walter Matthau and Jack Lemmon) are retired long time friends. Schemer Charlie manages to convince Herb to take a cruise as a chance to meet women but what he doesn't tell him is that they are to be dance instructors on board! Complications ensue!

Louisa (1950)-Hal Norton (Ronald Reagan) suggests to his sweet but somewhat meddlesome mother Louisa (Spring Byington) that she should find some other interests outside their home when she gets too involved in the lives of his wife and kids. Louisa takes his advice and starts dating the local grocer Henry Hammond (Edmund Gwenn-Miracle on 34th Street's Kris Kringle). All is well and good until Hal's boss Abel Burnside (Charles Coburn) takes a fancy to her too and suddenly the Norton's placid life takes a crazy turn with Louisa in the middle of a late life love triangle! Sweet film with delightful performances by the three leads.

I've only seen Nebraska, but it is fantastic. Bruce Dern and June Squibb are absolutely perfect.

We match on Nebraska! That was a nice little film, it really surprised me.

Great post! I really like the sound of Tough Guys. Will try and watch that if I have the chance. Nebraska is something I'd like to watch too, especially seeing how popular it is with other people who have commented too.

Nebraska really got to me, what a well made little film.

I really thought this theme was about what the elderly may choose as their favourite films. I have seen all 3 films. Nebraska is quirky and one that I enjoyed. I love Out To Sea witht he 2 great real friends of Lemmon and Matthau. They had great timing" I love Tough Guys which showed how each were dealing with their freedom in this new world. I wonder what these 2 would think about it now. It was classy and shows the true fr8endship these 2 had off screen as well.

Tough Guys is one I'll look into. It looks like a lot of fun, and I tend to love Burt Lancaster as a general rule.

I liked Nebraska, but I'm not sure it's one I'd watch again. June Squibb, though, makes the entire film, and if I did watch it again, it would be for her.

How have I not heard of Nebraska?! I need to see that movie!

Diary of a Movie Maniac said...

Tough Guys is a lot of fun. Love the original Going in Style too. Batteries Not Included is another good flick about the elderly.