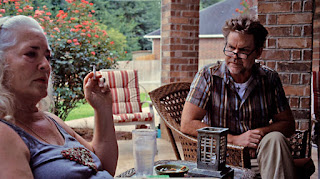 Written, edited, co-starring, and directed by Trey Edward Shults that is based on a short film that he wrote and directed, Krisha is the story of a woman who returns to spend Thanksgiving with her estranged family as she copes with demons and her own substance abuse issues. The film is a study of a woman who is trying to stay clean and keep out of trouble yet her own issues start to threaten this event in the hope that she can reconcile with her family as the titular character is portrayed by Shults’ real-life aunt Krisha Fairchild. Also starring Robyn Fairchild and Bill Wise. Krisha is an eerie yet mesmerizing film from Trey Edward Shultz.

It’s Thanksgiving as a woman in her 60s arrive to the house having not seen her family in nearly a decade as she hopes to reconcile with them including her son whom she’s been estranged with while is coping with demons including her own past as an alcoholic and drug addict. It’s a film with a simple premise as it takes place mainly in the span of an entire day from Krisha’s arrival to the house in the day to the chaos expected in Thanksgiving at night. Trey Edward Shults’ screenplay doesn’t have much of a plot as it’s more of a character study of Krisha as she is trying to make amends with the family including her son Trey (Trey Edward Shults) whom she remains estranged with as she is seeking to reconcile with him though Trey is resistant as he remains close to his aunt Robyn (Robyn Fairchild).

Adding to the turmoil of the day is her brother-in-law Doyle (Bill Wise) who is skeptical about Krisha being sober and hoping she doesn’t cause trouble. As the day goes on, Krisha struggles with the chaos as well as meeting her dementia-stricken mother Billie (Billie Fairchild) as the script showcases a family trying to enjoy themselves yet there is this dark shadow that is lurking in the form of Krisha and how she might ruin the day.

Shults’ direction does have elements of style in its presentation as well as choosing different aspect ratios in the film to play into Krisha’s state of mind. Yet, Shults does maintain an intimacy throughout the film as it is shot on location at the home of Shults’ parents in Texas. The film’s second shot that has Krisha arriving on a truck and trying to find the front door of this big house as it is this long tracking shot that is shot in 1:85:1 aspect ratio that opens wide and gets closer into a medium shot as it help sets the tone for the film’s first half. Notably in the way Shults’ usage of hand-held cameras and his approach to close-ups and medium shots play into a style similar to cinema verite where it feels real at times while there are also these moments that play into the activity of family members goofing around or cooking in these sort of gliding camera shots.

Also serving as the editor, Shults provides some unique jump-cuts and some stylish montages as it play into some of the craziness that occurs as it would build into Krisha’s own state of mind as well as the difficulty to maintain her sanity. The film’s second half opens with a new aspect ratio in the 2:35:1 aspect ratio as it would play into the demons that is happening around Krisha as it has this dizzying presentation where it looks like something is about to break where Shults’ direction play into this whirlwind of chaos. The film’s opening shot and its last 20-30 minutes is presented in a 1:33:1 aspect ratio as its focus is on Krisha and all of the drama that is to occur but also a woman who knows she is fragile and ponders whether she made the mistake of attending this dinner. Shults would use close-ups to play into her plight as well the opening shot of the film mirrors the final shot as it focuses on this intense night for a woman whose demons may have not have gone away. Overall, Shults crafts a gripping and unsettling film about a woman’s attempt to reconnect with her family on a tense and troubled Thanksgiving.

Cinematographer Drew Daniels does brilliant work with the film’s cinematography with its naturalistic look as well as using available light to maintain something that feels real but also gorgeous in its look. Sound designer Tim Rakoczy does amazing work with the sound as it play into the atmosphere of the noises at the home as well as some of the sparse chaos that occur. The film’s music by Brian McOmber is incredible for its haunting and eerie music score that is filled with some ambient and electronic textures that include a key scene of loops and soundscapes for a dizzying sequence in the film’s first half as well as low-key ambient cuts to play into the drama while the lone non-score piece is a song performed by Nina Simone that is played on a record player.

The film’s superb cast feature some notable small roles from an ensemble of mainly non-actors that include some of Shults’ relatives and friends in Bryan Casserly and Olivia Grace Applegate as the young couple in Logan and Briana respectively, Rose Nelson and Chase Joilet as a couple of relatives, Atheena and Augustine as a couple of twin women, Chris Doubeck as Robyn’s husband, and Billie Fairchild as Krisha’s dementia-stricken mother. Robyn Fairchild is excellent as Krisha’s sister Robyn as a woman who invited her to Thanksgiving as she is hoping that Krisha would be fine only to realize that Krisha might not all be well.

Trey Edward Shults is fantastic as Krisha’s estranged son Trey as someone who is close to Robyn and the family but is wary of his mother despite her attempts to reconnect with him as it’s a restrained performance from Shults who plays a man who is probably not ready to talk to her. Bill Wise is brilliant as Krisha’s brother-in-law Doyle as a relative who converses with Krisha yet isn’t sure that Krisha is telling the truth as he is suspicious about her sobriety making him antagonistic towards her. Finally, there’s Krisha Fairchild in a tremendous performance as the titular character as a woman who is hoping to reconnect with her family including her son following a near-decade of cleaning herself up as she contends with old demons and other events as it’s just this chilling and entrancing performance where Fairchild displays a woman who might crack at any point as well as is someone who knows how fragile she is as it is definitely a performance that needs to be seen.

Krisha is a tremendous film from Trey Edward Shults that features a phenomenal performance from Krisha Fairchild. Along with its supporting cast, realistic imagery, themes of reconciliation and substance abuse, and its offbeat and haunting score. The film is definitely an unconventional yet unsettling drama that play into a woman’s attempt to redeem herself only to deal with some unresolved issues and demons that might destroy this one night of gathering. In the end, Krisha is a spectacular film from Trey Edward Shults.

I meant to watch this years ago and never got around to it. I'll have to try to circle back to it now.

I forgot about this one but you've put it back on my radar.

@Brittani-If you have Showtime, you'll find it there.

@Jay-I just saw the short the film was based on yesterday as I recommend watching both.

I actually saw this a few years ago at a film festival. I agree with your review though at the time I felt like it's a film I appreciate but not love or want to see again. Still it's amazing the filmmaker was able to get such a performance from his own aunt.

@Ruth-It was a much better film than I thought it would be as I have Waves on my DVR hard drive waiting to be watched in the coming days.