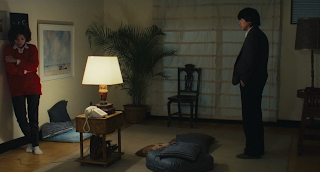 Directed and scored by Edward Yang and written by Yang, Hou Hsiao-hsien, and Chu Tien-wen, Taipei Story is the story of a washed-up baseball player who works for his family’s textile business as he deals with his girlfriend’s desire to go into the modern world during some major changes in the city. The film is a study of a couple whose relationship starts to disintegrate over two different directions with one wanting to hold on the past and other towards this new wave of modernism. Starring Hou Hsiao-hsien, Tsai Chin, and Wu Nien-jen. Taipei Story is a ravishing and somber film from Edward Yang.

The revolves around a couple who move to an expensive apartment in Taipei as a former baseball player returns from America with little prospect of a future while his girlfriend struggles to find work after resigning from her job as she is eager to move to America. It’s a film that explores a couple whose relationship begins to disintegrate amongst a growing sense of major changes in and around Taipei as the woman wants to be part of this new world though her boyfriend struggles to make ends meet as he works for his family’s textile business which is going through issues while coping with his own failures as a once-promising baseball player. The film’s screenplay by Edward Yang, Hou Hsiao-hsien, and Chu Tien-wen is largely straightforward in explore the lives of the office worker Chin (Tsai Chin) and her boyfriend Lung (Hou Hsiao-hsien) as they both diverge into paths of their own as it play into what they want but also the struggles of achieving that goal. Chin was working in an office until she resigned over issues in a failing business as she still wants to socialize with people who work in the same field including her boss Mr. Ke (Ke I-cheng) who has feelings for her.

Lung learns that a former baseball player in Ch’en (Wu Nien-jen) has become a taxi driver and is also going through his struggles after doing military service with a wife that is often neglectful towards their children in favor of gambling. Lung also tries to maintain work in his family’s textile business despite the fact that his mother and sister both live in America as he constantly has to talk to his brother-in-law. Adding to his troubles is Chin’s estranged father (Wu Ping-nan) who has been in some serious financial troubles where Lung wants to help him despite the fact that Chin implores that he doesn’t as it would threaten their plans to go to America.

Yang’s direction does have elements of style as much of the film’s compositions are straightforward as it aims for some realism in its visuals. Shot on actual location in Taipei, Taiwan, the city itself is a character in the film as it plays up this representation of a world that is becoming vibrant and being part of a bigger world that it’s caught up on. A world that Chin wants to be in as it includes a scene of her hanging with her younger sister Ling (Lin Hsiu-ling) at a club and later on a nighttime ride through the city with its vibrant lights. The usage of wide and medium shots doesn’t just play into the scope of the city and its locations in and out of the city but also to display this growing schism between Chin and Lung as the latter is often seen in smaller and claustrophobic locations as well as places that are often in decay as he tends to feel awkward during a scene where he’s with Chin and her friends. Notably as one of them would harass Lung about his failed baseball career leading to a fight as Yang doesn’t feature a lot of close-ups in his films except in certain bits as it plays into the uncertainty into Lung and Chin’s disintegrating relationship.

Yang also play into this dramatic subplot that involves Lung and Chin’s father as it plays into Lung’s need to help people as there’s a scene late in the film where the two are having a drink as Chin’s father is talking about what the city used to be and what it has become now. It adds to Lung’s clinging to the past as he faces this uncertainty but also this feeling of failure as he had a lot of promise as a baseball player but failed to live up to expectations in the big leagues. Chin’s frustrations over Lung’s lack of progress to change anything as well as a visit from a former flame in Gwan (Ke Su-yun) that would play into their schism. Also serving as the film’s music composer with cello performances from Yo-Yo Ma, Yang’s score is somber as it adds to the drama with its lush orchestral arrangements and Ma’s cello just adding that sense of uncertainty for both Lung and Chin. Overall, Yang crafts a compelling and evocative film about a couple living in Taipei as they start to disintegrate over ideas of modernism and tradition.

Cinematographer Yang Wei-han does brilliant work with the film’s cinematography with its emphasis on natural lighting including for many of the interior scenes where the usage of low-level lights for the nighttime scenes add to the air of realism as well as the vibrant exterior scenes at night. Editors Wang Chi-yang and Sung Fan-chen do excellent work with the editing as it is largely straightforward to play into the drama as well as a few moments of humor in the film. Production designer Tsai Cheng-pin does fantastic work with the look of the apartment Chin and Lung live in to play into this clash of their ideals along with the places they go to. Costume designer Chen Chih-chan does terrific work with the costumes as it is largely straightforward from the fashionable look of Chin to the more casual look of Lung. The sound work of Tu Tu-chih is superb as it play into the atmosphere of the locations that include a club where Ling takes Chin to and a bar where Lung almost gets into a fight as the music soundtrack features pieces from Lionel Richie, Kenny Loggins, Michael Jackson, and Tina Turner.

The film’s incredible cast feature some notable small roles from Lai Te-nan as an old baseball coach of Lung, Chen Shu-fang as an executive who wants to give a job to Chin, Ke I-cheng as an executive Chin worked for as he pines for her, Yang Li-yin as Ch’en’s wife who neglects her children in favor of gambling, Mei Fang as Chin’s mother, Wu Ping-nan as Chin’s estranged father whose financial troubles forces Lung to help him, Ke Su-yun as a former flame of Lung in Gwan who was also a childhood friend of Chin, Lin Hsiu-ling as Chin’s younger sister Ling who has an interest in American and Japanese culture, and Wu Nien-jen as Ch’en as a former baseball player turned cab driver who tries to help Lung find more work as they lament over their failures to become professional baseball players.

Finally, there’s the duo of Tsai Chin and Hou Hsiao-hsien in phenomenal performances in their respective roles as Chin and Lung. Hsiao-hsien provides this low-key yet somber performance as a man who feels like he’s lost as he tries to help out Chin’s estranged father and Ch’en but also lamenting over the fact that he could’ve been someone special in baseball. Chin’s performance is also reserved as a woman struggling to find a job as well as be part of this new Taiwan as well as a desire to go to America yet Chin also provides this frustration and anguish of a woman that wants to be a part of something instead of being out of step with the times like Lung as Chin and Hsiao-hsien also have this great rapport together in playing up this schism that is growing between their characters.

Taipei Story is a sensational film from Edward Yang that features great performances from Tsai Chin and Hou Hsiao-hsien. Along with its ensemble cast, themes of tradition vs. modernism, Yang’s lush music score with Yo-Yo Ma’s cello performances, and its ravishing visuals. The film is a captivating drama that explores a couple coming apart over changes and this need to conform to society with one of them unable to due to old values that he holds dearly. In the end, Taipei Story is a spectacular film from Edward Yang.

Edward Yang Films: (In Our Time-Desires/Expectations) – (That Day, on the Beach) – (The Terrorizers) – A Brighter Summer Day - (A Confucian Confusion) – (Mahjong) – Yi Yi

"Taipei Story is a ravishing and somber film from Edward Yang."

The film's muted colours and downplayed emotions have drawn me to watch it again and again. I do appreciate Yang's first feature, (That Day, On the Beach), but it's Taipei Story that jump-starts the Taiwanese New Wave cinema movement.

Something I find fascinating is the ambiguity of the very nature of Chin and Lung's relationship. It's never defined directly; it's only through Chin's anger at Lung's deceit toward the end of the film that brings about any open display of emotion between them. It seems obvious to me that they had been close in their school years, perhaps seen as childhood sweethearts, but what we see portrayed in the film is mostly the practicalities of adulthood, with barely the slightest hint of affection.

One of my very favourite films.