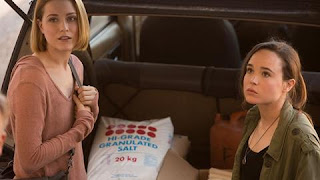 Based on the book by Jean Hegland, Into the Forest is the story of two sisters who live remotely following a worldwide power outage as they struggle to live without technology as well as deal with a new reality around them. Written for the screen and directed by Patricia Rozema, the film is an exploration of two young women who have to care for one another during a worldwide event that keeps them away from the rest of the world while having to deal with some of its dark aspects. Starring Ellen Page, Evan Rachel Wood, Max Minghella, Callum Keith Rennie, Michael Eklund, and Sandy Sidhu. Into the Forest is a riveting and somber film from Patricia Rozema.

Set in futuristic world where a worldwide power outage has occurred, the film revolves around two sisters who deal with this event as they’re forced to live alone and deal with their surroundings and the resources they have. It’s a film with a simple premise as it spans into nearly two years as it plays into these two young women who are forced to deal with their new situation as they live remotely in a house in the middle of the forest while having little gasoline for the power generator they have in the house. Patricia Rozema’s screenplay is straightforward as it play into the lives of these two sisters in Nell (Ellen Page) and Eva (Evan Rachel Wood) as the former is studying to be a doctor while the latter is trying to restart her dance career following an injury when the power goes out as they’re unable to do anything. The film’s first act is about the two sisters dealing with this newfound worldwide power outage with their father (Callum Keith Rennie) as they try to find ways to survive and with the little fuel they have in the car.

Yet, an accident would leave both of the sisters to fend for themselves as the second act has them dealing with their lack of resources but also what they want individually as Nell had befriended a young man in Eli (Max Minghella) who claims there’s something happening on the American east coast as Nell wants to join him. However, it would also mean abandoning Eva who is already struggling with living without power and is becoming depressed. The film’s third act involves the aftermath of an incident that impacted both sisters as they deal with dwindling resources as well as their home becoming inhabitable.

Rozema’s direction doesn’t bear a lot of stylistic choices in the compositions in order to be straightforward in the world that Nell and Eva are dealing with. Shot on various locations in the British Columbia province in Canada, the film does play into this small town world where Nell and Eva are part of a remote community that is often dominated by technology but everything changes due to this worldwide power outage. Rozema does use a lot of wide and medium shots to get a scope of the locations including the forest near the house that Nell and Eva live in as the house itself is a character in the film that included a dance studio where Eva practices. The medium shots also play into the intimacy of the home that include a lot of straightforward compositions involving Nell and Eva including a scene where they argue about using the gas for the power generator.

There are also close-ups as it play into some of the emotional moments in the film including a traumatic event that would shake both women late in the second act as it adds to the dramatic tone of the third act. Even in scenes where both women are emotional as it play into not just loss but uncertainty as it play into something they have to deal with but also a home that is crumbling prompting them to start something new. Overall, Rozema crafts an engaging and evocative film about two sisters surviving during a worldwide power outage.

Cinematographer Daniel Grant does brilliant work with the film’s cinematography as it plays into the natural usage of lighting for many of the exteriors including some low-key natural lighting for scenes at night including fire and available light. Editor Matthew Hannam does excellent work with the editing as it is largely straightforward as it plays into some of the dramatic moments as well as some livelier bits and some of the intense moments in the film. Production designer Jeremy Stanbridge, with set decorator Shannon Gottlieb and art director Tara Arnett, does amazing work with the look of the house Nell and Eva live in as the house is a major character in the film in displaying the rooms and such in the house including the detail on the roof that is in need of repair early in the film as well as a small shack that Nell and Eli find. Costume designer Aieisha Li does fantastic work with the costumes as it is largely casual in the clothes that many of the characters wear in the film.

Visual effects supervisors Ryan Jensen and Kevin Little do terrific work with the visual effects as it mainly focuses on a key event towards the end of the film. Sound mixers Kristian Bailey and Kirk Lynds do superb work with the sound to play into the atmosphere of the forest and its surroundings as well as its emphasis to record all of the sparse moments in the locations. The film’s music by Max Richter is wonderful for its low-key orchestral score that is largely based on string arrangements to play into the air of uncertainty and loss while music supervisor Velma Barkwell provide a soundtrack that mainly consists of two songs including a cover of Wild is the Wind by Cat Power and a song by Sylvan Esso and Amelia Meath.

The film’s incredible ensemble cast feature some notable small appearances from Sandy Sidhu as a woman quizzing Nell during an online test exam, Jordana Largy as Eva’s dance teacher, Michael Eklund as a creepy supermarket clerk named Stan, Wendy Crewson as Nell and Eva’s late mother who is seen through home movies, Callum Keith Rennie as Nell and Eva’s father who is with them in the early days of the power outage, and Max Minghella in a superb performance as Eli as a young man Nell befriends and falls for as he suggests they all go to the east coast to find jobs and power.

Finally, there’s the duo of Ellen Page and Evan Rachel Wood in phenomenal performances in their respective roles as Nell and Eva. Page provides that air of grounded realism and quirky humor to her role but also knows when she has to be serious as she reads a lot and does whatever she can to make sure she and Eva have resources. Wood brings in that air of uncertainty as a dancer who is recovering from a knee injury as she is struggling to keep things going while also coping with loss and later an event that would trouble her. Page and Wood together have this chemistry and rapport as two young women dealing with a worldwide power outage as well as trying to survive and live with little resources as they’re the major highlights of the film.

Into the Forest is a remarkable film from Patricia Rozema that features great performances from Ellen Page and Evan Rachel Wood. Along with its wondrous setting, gorgeous visuals, and a somber music score, the film is a fascinating drama that explores two young women dealing with a worldwide power outage and their need to survive amidst loss and trauma. In the end, Into the Forest is a marvelous film from Patricia Rozema.

You liked it so much more than I did. The rape absolutely ruined it for me, and I never recovered. Bummed me out because Evan and Elliot being in a movie together was a dream.

Well hello, long time no see! Just leaving a little note to say I’m still visiting, still reading. Please pardon the cut and paste message – you may have noticed my absence on my own site, due to some health concerns. I’ve had a few surgeries lately, including one on my right arm, which makes almost all typing and computering impossible. I’m hoping to return to our regular programming soon, and until then, I am forever your friend, and fan. xo

@Brittani-I winced during that rape scene knowing what Evan had been through. Especially from that low-life cunt Marilyn Manson. Still, I liked the film as I was just happy to see Evan and Elliot be great together and I hope they do another film together. They're Bullet Club 4 Life!

@Jay-I hope you're doing better and taking that time to recover. Just be tranquilo and everything will be fine.

Somehow I hadn't heard of this film before but Patricia Rozema is a good director. I'm not a huge fan of Ellen/Elliot Page generally but I love Evan Rachel Wood!

@Ruth-This is a worthwhile film and both Evan and Elliot are great in this as I bought them as sisters. Plus, they're my peeps. Bullet Club!