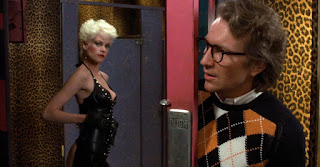 The film follows an actor who loses a gig due to his claustrophobia and learns that his girlfriend is having an affair as he meets another actor who gives a job to house-sit a home for him where he peeps at a neighbor across the street who would later be murdered. It is a film that play into a man who falls for this woman who was dancing erotically as she mimicked the moves of a porn actress whom he would later hire to get him to solve this mystery. The film’s screenplay by Brian de Palma and Robert J. Avrech does play into the idea of voyeurism as the protagonist in struggling actor Jake Scully (Craig Wasson) meets another actor in Sam Brouchard (Gregg Henry) who is house-sitting a lavish home as he offers Scully to do the job as he’s set to go work outside of Los Angeles.

Brouchard would show Scully a house across from their home as they watch a woman dancing erotically through a telescope where Scully would later watch events where something is off as he would later follow this woman in Gloria Revelle (Deborah Shelton (with the voice of Helen Shaver)) who is aware she’s being followed as she’s also having issues with her husband. The day she and Scully meet where they’re seen by a mysterious man in a mask, Scully admits to following her as he would later watch her that night where everything goes wrong. The screenplay definitely show that Scully is someone who meant well though being a voyeur to a murder scene didn’t help matters until he discovers a porn film starring Holly Body (Melanie Griffith) who dances in a similar manner that Gloria did where he seeks her help.

The direction of de Palma definitely emphasizes on style as it also borrows some of the visual styles of his favorite filmmaker in Alfred Hitchcock. Shot on location in Los Angeles and Hollywood, de Palma definitely uses its studio backlots, the Hollywood Hills, and other notable locations as characters in the film while the lavish home that Scully is house-sitting is this circular home with a spinning circular bed is the icing on the cake. While there are these intimate moments including some inventive usage of medium shots and close-ups as it play into the drama and suspense. It is de Palma’s usage of wide shots add to the visual quality such as a scene outside of a beachside motel where everything is presented in a wide shot where Gloria is in one part of the motel and Scully on the stairs following her. It is among these shots including a sequence in the mall just minutes before as it is about where the actors are in a part of the mall and such as it showcases de Palma’s usage of geography as it add to the suspense and drama.

Special makeup effects artist Thomas R. Burman does terrific work with the makeup in some of the makeup that Scully wears in the film’s first scene as well as in the porno film set. Sound editor Stephen Hunter Flick does superb work with the sound as it help play into the suspense including the murder scene and the film’s climax. The film’s music by Pino Donaggio is incredible for its score with its lush orchestral piano pieces and other string themes as it also feature some chilling themes and some electronic pieces as the score is a major highlight of the film as its soundtrack includes a music video from a new wave band and a performance from Frankie Goes to Hollywood.

Deborah Shelton is excellent as Gloria Revelle as a rich woman who is being stalked by a mysterious masked figure who keeps coming to her home secretly as she is also into eroticism unaware she’s being watched with her voice dubbed by Helen Shaver. Melanie Griffith is brilliant as Holly Body as a porn actress who is this charming young woman that is also a lot smarter than people give her credit for while also being aware that she is playing a major part in this murder mystery due to the way Gloria dances. Gregg Henry is amazing as Sam Brouchard as an actor who asks Scully to house-sit a home for him as he’s away for a gig as he helps Scully out in getting a place to stay while also hoping to have Scully enjoy the view. Finally, there’s Craig Wasson in an incredible performance as Jake Scully as a struggling actor whose girlfriend cheated on him and doesn’t have a home as he takes a job for another actor only to find himself in deep shit while dealing with claustrophobia as it is a gripping and engaging performance from Wasson.

Body Double is a spectacular film from Brian de Palma. Featuring a great cast, dazzling visuals, a chilling mix of sex and violence, and Pino Donaggio’s luscious score. The film isn’t just one of de Palma’s quintessential films but also a unique suspense thriller that explores claustrophobia, voyeurism, and desire. In the end, Body Double is a sensational film from Brian de Palma.

I'm not well versed in De Palma's filmography so I haven't heard of this one, but I'm intrigued.

@Brittani-This film is a must. It is de Palma at his dirtiest but also a man who is all about style yet he doesn't apologize for it. You do see a lot of Hitchcock in his visual style but that's what I love about it.

Pretty much a lot of his films in the 70s and 80s are among his best though he does have an inconsistent filmography but I will say this. A bad de Palma film is still better than a lot of other people's films as they're never boring. When he fails, he fails big. I got 2 more films of his that I have access to. One on YouTube and the other is an extra from the Criterion DVD for Blow Out which is his first film. I would also suggest watching Noah Baumbach and Jake Paltrow's documentary on de Palma as he's just an interesting person.