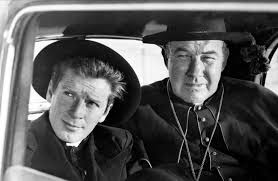 Directed by Federico Fellini and written by Fellini, Ennio Flaiano, and Tullio Pinelli, Il bidone (The Swindlers) is the story of an aging con man whose crimes start to catch up with him as he tries to con poor peasants into giving him money and such. The film is a look into a man dealing with his growing sense of morality, regrets, and a world that is ever-changing. Starring Broderick Crawford, Giulietta Masina, and Richard Basehart. Il bidone is a rapturous and captivating film from Federico Fellini.

The film revolves around a group of conmen who often charm their way or disguise themselves as priests to swindle poor peasants out of their money and treasures they have as one of them is a middle-aged man who copes with the growing immorality of his line of work. It is a film that explore a trio of men who work with a criminal who hires them to swindle money out of the poor while using money to live their lives yet eldest con man in Augusto (Broderick Crawford) is thinking about a life after crime yet still does things to live. The film’s screenplay by Federico Fellini, Ennio Flaiano and Tullio Pinelli is straightforward in its narrative yet much of it is told from Augusto’s perspective while it also follows the lives of his fellow conmen in Robert Giorgio (Franco Fabrizi) who loves doing the con game while Carlo aka Picasso (Richard Basehart) hopes to make it as an artist and bring some money to give himself and his wife Iris (Giulietta Masina) a better life with their daughter.

Yet, the appearance of Augusto’s daughter Patrizia (Lorella De Luca) whom he hadn’t seen in a year as well as bumping into a former con man in Rinaldo (Alberto De Amicis) who has become successful as Augusto is invited to a New Year’s Eve party with Carlo, Iris, and Giorgio where things go wrong due to Giorgio’s actions. Even as Giorgio would continue to put Carlo and Augusto into more schemes that eventually has the two of them ponder about their future as the latter copes with the recent sighting of his daughter whom he tries to reconnect with as he deals with the sins of the past.

Fellini’s direction is largely straightforward in terms of his compositions and setting as much of it is shot in Rome and areas outside of Rome as it play into this world where the poor are being conned into giving their money away to con men. While there are some wide shots in some of the locations that include some of the rural, countryside scenes where the poor are often seen. Fellini does maintain an intimacy in his approach to the way he shoots his characters in a frame whether they’re in a section in the city of Rome or how they interact with characters in a poor location where the poor live. Fellini’s usage of close-ups and medium shots add to the drama including the scenes at the New Year’s Eve party where there is a lot that is happening with Fellini often focusing on Carlo and Iris as well as Augusto trying to make a business deal with Rinaldo. There is also focus on a woman being asked to strip where Rinaldo's wife Marisa (Irene Cefaro) watches with disgust while Fellini also showcases an object that would be the cause of Augusto’s troubles due to Giorgio.

The film’s second half does play into the drama as it relates to Augusto’s own past finally catching up with him as well as the lack of a future for himself with Carlo and Giorgio both going into different directions as the latter becomes more reckless. The film’s climatic third act does involve a job for Augusto working for his handler with a new gang of thieves as it becomes a moment of morality in the people he’s about to con. Notably as it is followed by a man dealing with his conscience in a world that has become much crueler where Fellini definitely play into the desolate location set in a mountain area as it serves as a metaphor for what Augusto is coping with. Overall, Fellini crafts a somber yet riveting film about a con man dealing with his crimes and an ever-changing world of immorality.

Cinematographer Otello Martelli does brilliant work with the film’s black-and-white photography to play into the beauty of the daytime exteriors while using available and some stylish lights for the scenes at night including the New Year’s Eve party. Editors Mario Serandrei and Giuseppe Vari do excellent work with the editing as it is largely straightforward to play into the drama and bits of humor with some rhythmic cuts for the latter. Production/costume designer Dario Cecchi and set decorator Massimilano Capriccioli do amazing work with the look of some of the interior of the farms and the interiors of Rinaldo’s home with Cecchi creating some unique clothing including the fake priests clothing for Carlo and Augusto and the dresses that the women wear. Sound editor Giovanni Rossi does nice work with the sound as it play into the atmosphere of the locations as well as the sound of some of the exteriors in Rome. The film’s music by Nino Rota is incredible for its sumptuous orchestral score with elements of bombastic and somber string pieces that also include brass arrangements to play into the drama and some of the film’s humorous moments.

The film’s wonderful ensemble cast feature some notable small roles from Riccardo Garrone as a con man Augusto works late in the film, Giacomo Gabrielli as Augusto’s handler Il Baron Vargas, Sue Ellen Blake as a young woman that Augusto meets late in the film, Irene Cefaro as Rinaldo’s wife Marisa, Alberto De Amicis as a former criminal associate of Augusto in Rinaldo who has changed his life into something greater, and Lorella De Luca in a fantastic performance as Augusto’s daughter Patrizia whom Augusto hadn’t seen in a few years as he tries to reconnect with her while not wanting her to know about what he really does as she is someone that is about to take a major step with her life prompting Augusto to wanting to help her. Franco Fabrizi is excellent as Roberto Giorgio as a smooth con man who likes to wear nice clothes and drive the finest cars as he is an immoral figure that doesn’t care who he steals from as long as he gets something where he would become a source of trouble for both Augusto and Carlo.

Giulietta Masina is amazing in her small role as Carlo’s wife Iris as a woman who is oblivious to what her husband does as she becomes uncomfortable attending Rinaldo’s New Year’s Eve party where she finds herself alienated by the people at the party as well as having some revelations about what her husband does. Richard Basehart is brilliant as Carlo aka Picasso as an aspiring artist who is hoping to use the money to give his wife and daughter a better life while also hoping to kick start his career as an artist only to cope with failures and uncertainty. Finally, there’s Broderick Crawford in a tremendous performance as Augusto Rocco as a veteran con man who often plays a head priest in his scams as he deals with the recent appearance of his daughter and a growing sense of immorality around him as he deals with not just his sins catching up with him but also a growing conscience as he copes with the people he’s scamming.

Il bidone is a phenomenal film from Federico Fellini that features an incredible leading performance from Broderick Crawford. Along with its ensemble cast, study of immorality and society, dazzling visuals, and a rich music score from Nino Rota. The film is definitely a fascinating yet somber film that explore the life of con men as well as this growing sense of change socially and morally that is happening in post-war Italy. In the end, Il bidone is a sensational film from Federico Fellini.

Love Crawford in this, and the internal battle he wages as he takes a moral accounting of the sum of his actions.

@Jay-This was a much better film than I thought it would be as even though I'm a fan of Fellini as there's still some films of his I haven't seen. I thought this would be a minor Fellini film but no... it was way better than that and Crawford (though he was dubbed in the film) killed it. If I was in his shoes with that young girl towards the end, I'd probably do the same.