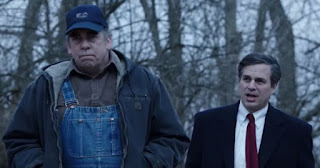 Based on the New York Times Magazine article The Lawyer Who Became DuPont’s Nightmare by Nathaniel Rich, Dark Waters is about an attorney’s battle against the chemical manufacturing company DuPont over their water contamination in a small town. Directed by Todd Haynes and screenplay by Mario Correa and Matthew Michael Carnahan, the film is about the real-life battle between Robert Bilott and the DuPont Corporation in the mid-2000s over water contamination in a small Ohio town as Mark Ruffalo plays Bilott. Also starring Anne Hathaway, Tim Robbins, Bill Camp, Victor Garber, Mare Winningham, William Jackson Harper, and Bill Pullman. Dark Waters is a chilling and mesmerizing film from Todd Haynes.

Set largely from 1998 to 2015, the film is about the real-life battle between corporate defense attorney Robert Bilott and the chemical manufacturing company DuPont over water contamination in the small town of Parkersburg, West Virginia as the former’s grandmother lived there where she told a farmer to call Bilott over the deaths of his cows. It is a film that explore this man who is asked by his grandmother to help this farmer who is needing help as he had lost a lot of cows while showing evidence of deformed body parts. The film’s screenplay by Mario Correa and Matthew Michael Carnahan is largely straightforward yet it follows a long period that play into legal battles and how Bilott kept fighting despite the strain it puts into his family life, his health, and issues involving the firm he works for as it’s a firm known for defending corporations. While the film briefly opens with a few people skinny-dipping onto a lake in 1975 where they’re forced to leave by a couple of men wearing jumpsuits as they spray something in the water. It sets the tone of what Bilott would discover as well as many revelations about what kind of chemicals DuPont has creates where Bilott at first is just doing his grandmother a favor even though his firm works for DuPont.

When the farmer Wilbur Tennant (Bill Camp) reveal some of the locations as Bilott gets a closer look into the graveyard that Tennant had created for his dead cows as well as witnessing a cow being killed after acting crazy. Despite the lack of support he gets from the Taft Stettinius & Hollister law firm over his case, they do get eventually on board when the firm’s supervising partner Tom Terp (Tim Robbins) realizes what is at stake as well as the chemicals that DuPont had created known as perfluorooctanoic acid, that is used for Teflon non-sticking frying pans and carpet flooring, as the source that’s been contaminating not just the water at a nearby landfill in Parkersburg but at the town’s water where many of its locals are ill. Though the years of litigation, independent testing, and such would be long and arduous as well as reveal so much where Bilott realizes that he must fight despite the fact that it takes away a lot of his time from his family that includes his wife Sarah (Anne Hathaway).

Todd Haynes’ direction definitely has elements of style in his overall presentation but he also knows when to keep things straightforward. Shot on location in Cincinnati, Ohio as well as locations nearby including parts of areas in Ohio as Parkersburg, West Virginia, Haynes makes these locations central to the film as the small town of Parkersburg with several locals including the real Robert and Sarah Bilott as well as other characters do appear in the film in cameos. There are wide shots in some of the locations including shots of the DuPont chemical plant and the buildings in Cincinnati including the one where Bilott worked at. Still, much of Haynes’ direction emphasizes on intimacy in the close-ups and medium shots while also employing some unique dolly and tracking shots for some scenes to play into the atmosphere of a location whether it’s a local church in Parkersburg or a building hallway. Haynes’ direction also play into the dramatic suspense but also this feeling of a moment in time as it mainly from the late 90s to the 2010s as the Bilott home would often change that also feature a humorous bit where one of the sons isn’t happy about having to go to hardwood floors instead of carpet.

Still, Haynes maintains this sense of drama including moments where people representing DuPont want to target Bilott as well as locals from Parkersburg who feel that Bilott is disrupting their livelihood since they depend on DuPont for employment where they take it out on Tennant and another local in Darlene Kiger (Mare Winningham). While the third act does feel overwritten and at times does drag which Haynes definitely aimed for as it play into how long litigation gets where cases take years to do including data research. It does play into the struggles that Bilott went through but also revelations about his own worth and the sacrifices he made despite all of the strain he put on himself and his family all because he became concerned about a farmer. Overall, Haynes crafts an evocative yet haunting film about a corporate defense lawyer who fights for a farmer against a gigantic chemical manufacturing company.

Cinematographer Edward Lachman does brilliant work with the film’s cinematography with its usage of blueish colors for some of the daytime exteriors as well as the emphasis on sepia-like lighting for some of the interior scenes at night. Editor Affonso Goncalves does excellent work with the editing as it features some jump-cuts, dissolves, and a montage where Bilott explains to his wife in his discovery. Production designer Hannah Beachler, with set decorator Helen Britten and art director Jesse Rosenthal, does amazing work with the evolving look in the interior of the Bilott family home as well as the Tennant farm in its exteriors to play into its decayed look. Costume designer Christopher Peterson does fantastic work with the clothes that play into the evolving style that Sarah would wear throughout the film with everything else from the suits that Bilott wears to the regular and casual clothing of the people at Parkersburg.

Prosthetic makeup effects designer Michael Marino does nice work in some of the film’s minimal effects involving not just the look of a few characters but also in the mutated animal internal organs that Tennant showed Bilott. Special effects supervisor Bob Riggs and visual effects supervisor Ed Chapman do terrific work with some of the film’s visual effects which is mainly bits of set-dressing but also in the video footage that Tennant had filmed in his farm. Sound designer Leslie Shatz does superb work with the sound as it help play into the way characters in locations sound including a few court rooms as well as some of the video that Bilott watched that Tennant film. The film’s music by Marcelo Zarvos is wonderful for its ambient-based score that play into the drama but also the sense of dread that emerges in the film while music supervisor Randall Poster creates a soundtrack that largely feature country music from acts like Willie Nelson, John Denver, Waylon Jennings, Reba McIntyre, and Deana Carter as well as music from Kenny Loggins, Stan Getz, and John Milton Barrett.

The casting by Laura Rosenthal is great as it feature some notable small rules and appearances including real-life people were involved in the case such as Rob and Sarah Bilott as a couple at a posh party, the deformed Bucky Bailey as a man asking Rob for sports scores, Jim Tennant as a diner patron, Darlene and Joe Kiger as church attendees, Elizabeth Marvel as the voice of a doctor talking to Bilott late in the film, the trio of Aidan Brogan, Nathan Slaughter, and Graham Caldwell in their respective roles as the eldest to youngest version of Teddy Bilott, Beau Hartwig and Jacob Bukowski in their respective roles as the oldest and youngest version of Tony Bilott, Keating P. Sharp as the 11-12 year old version of Charlie Bilott, Louisa Krause as the attorney Clara Pfeiffer who is one of the few that supports Bilott in his case, William Jackson Harper as a colleague of Bilott who is baffled by Bilott working on the case, Kevin Crowley as a local West Virginian attorney in Larry Winter who helps Bilott, Denise Dal Vera as Tennant’s wife Sandra, Richard Hagerman as Joe Kiger, Jim Azelvandre as Jim Tennant, and Bill Pullman in a superb performance as Harry Dietzler as an attorney who helps Bilott in the cases as he raises many questions about DuPont.

Mare Winningham is fantastic as Darlene Kiger as a woman who lives in Parkersburg who turns to Bilott over something she received as she realizes something isn’t right while also knowing that the town will go against her in her fight against DuPont. Victor Garber is excellent as an attorney for DuPont who at first helps Bilott out only to become confrontational and denying everything Bilott is asking for. Tim Robbins is brilliant as Tom Terp as a managing partner of the Taft Stettinius & Hollister law firm who isn’t supportive of Bilott in this case until he realizes the severity of Bilott’s discoveries as he realizes that they must sue DuPont or else they would look even worse by supporting them. Bill Camp is amazing as Wilbur Tennant as a farmer whose cows had died due to the poisoned water from a nearby landfill as a man who just wants justice despite the fact that he would be ill from the water in his land.

Anne Hathaway is incredible as Sarah Bilott as a housewife/former lawyer who is concerned about her husband’s work as well as what he discovered where she tries to deal with all of it but also defend him when people are going after him as it is Hathaway at her strongest and most stern. Finally, there’s Mark Ruffalo in a tremendous performance as Robert Bilott as a corporate defense attorney for the Taft Stettinius & Hollister law firm who is asked by his grandmother to help this farmer only to realize a lot of things went wrong where Ruffalo plays into this man’s own desperation to do what is right even if it brings a strain to his family as it is an engaging and somber performance from Ruffalo.

Dark Waters is an incredible film from Todd Haynes that features great performances from Mark Ruffalo, Anne Hathaway, and Bill Camp. Along with its supporting cast, gorgeous visuals, a chilling music score, and its exploration over a real-life legal war against a giant corporation and the chemicals they created. It is a film that is a haunting drama that explore a man whose job is to protect corporations only to fight against a corporation that has harmed not just a small town but everyone forcing this man to fight for the good of the world. In the end, Dark Waters is a marvelous film from Todd Haynes.

I'll see this at some point, but honestly not in a rush. Every time I think about it Erin Brockovich keeps popping into my head.

@Wendell-It's not really like Erin Brockovich as it's a much slower film considering that it covers about 30 years of stories. It's a much darker film while it's also a different film that is expected from Todd Haynes yet it is still worth watching but it is kind of slow.

I saw this a few years ago and it's quite eye-opening! It made for a good double feature with The Devil We Know documentary, which was what I did.

@Ruth-I haven't heard about that film but I might check it out.