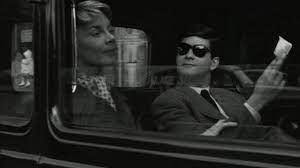 Based on the short story Mrs. Bixby and the Colonel’s Coat by Roald Dahl, Le Coup du berger (Fool’s Mate) is a short film about a woman who is having an affair with another man who bought her a new coat as they try to hide it from her husband. Directed by and narrated Jacques Rivette and screenplay by Rivette, Claude Chabrol, and Charles Bitsch, the short film is an exploration of a woman trying to hide her affair with this coat being the evidence of this affair. Starring Virginie Vitry, Anne Doat, Etienne Loinod, and Jean-Claude Brialy. Le Coup du berger is a witty and engaging film by Jacques Rivette.

The film is the simple story of a woman having an extramarital affair with another man who has purchased a new mink fur coat that they need to hide from her husband. It plays into this woman in Claire (Virginie Vitry) who is given this fur coat from her lover Claude (Jean-Claude Brialy) as they would hide it to avoid suspicion from her husband Jean (Etienne Loinod). The film also features narration where it play into Claire’s need to be one step ahead of her husband as if they’re playing chess until a mix-up over the coat emerges.

Rivette’s direction is definitely stylish in the way he shoots on location in Paris as it serves as a template for a lot of the films that would be part of the French New Wave. While there are a few wide shots including some scenes inside an apartment, much of Rivette’s direction is intimate in the way he presents this affair but also Claire’s need to hide her affair from her husband as she also gets help from her sister Solange (Anne Doat). Rivette’s usage of medium shots and hand-held camera for scenes in a car add to this energy within the film as well as playing up the suspense right to the film’s ending as it does play like a chess game as it include some rhythmic cuts from editor Denise de Casabianca who employ ideas that would become the jump-cut. Shot in black-and-white by co-writer Charles Bitsch, Rivette would maintain a distinctive look that add to the film’s energetic tone that is supported by Francois Couperin’s playful orchestral score. Overall, Rivette crafts a delightful and exhilarating short film about an adulterous wife’s attempt to hide a fur coat from her husband.

The film’s ensemble cast features cameo appearances from future filmmakers of the New Wave in Claude Chabrol, Francois Truffaut, and Jean-Luc Godard as well as Rivette as party guests at the film’s ending along with a fantastic performance from Anne Doat as Claire’s sister Solange who is always wearing clothes that Claire needs to hide. Etienne Loinod is superb as Claire’s husband who seems to not know anything until later in the film where he starts to act suspicious. Jean-Claude Brialy is excellent as Claude as a smooth and charismatic man who thinks he is clever although he would make a mistake that would get them into some trouble. Virginie Vitry is amazing as Claire as this beautiful woman who feels like her husband doesn’t do enough for her as she loves being with Claude but things get complicated over a mix-up as she ponders if the affair is worth all of the trouble.

Le Coup du berger is a phenomenal film from Jacques Rivette. Featuring a great cast, riveting visuals, and an engaging study of adultery and one-upmanship, it is a short film that isn’t just fun but also serves as a template of sorts of the ideas that would define a new era in cinema that would become the French New Wave. In the end, Le Coup du berger is a sensational film from Jacques Rivette.

This looks like a cute French film! Shot on location in Paris too? That's another reason to see it as I love the city of lights.

@Ruth-Well, it's a bit more grounded in comparison to other films as many consider this to be one of the first films of the French New Wave as I had it on my DVR and I think it's available on Vimeo. I only watched it because it's directed by Jacques Rivette as I have one of his films as a Blind Spot.