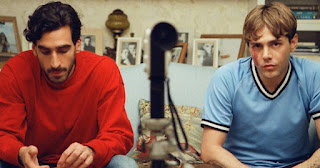 Written, directed, co-costume designed, edited, and co-starring Xavier Dolan, Matthias & Maxime is the story of two longtime childhood friends who take part in a short film where lingering feelings for one another lead to some major revelations. The film is an exploration of two men dealing with their own feelings for one another but also in how it would affect their social circle. Also starring Gabriel D’Almeida Freitas, Pier-Luc Funk, Samuel Gauthier, Antoine Pilon, Adib Alkhalidey, Anne Dorval, Micheline Bernard, Marilyn Castonguay, and Catherine Brunet. Matthias & Maxime is an extraordinary and somber film from Xavier Dolan.

The film follows two lifelong friends in their late 20s as they attend a party with other friends where one of the friend’s younger sister is there asking for help to appear in a student short film as the two volunteer to do something leading to many revelations following their contribution to this student film. It is a film with a simple premise as it play into these two different men at crucial stages in their life as they wonder if they do have feelings for one another as Xavier Dolan creates a script that is grounded in these ideas but also play into the dynamic of the individual lives of the titular characters in Matthias (Gabriel D’Almeida Freitas) and Maxime (Xavier Dolan).

They attend a friend’s lake house for a little get together since Maxime is set to leave for Australia for two years to work while Matthias is on his way to a promotion as a young film student asks them to take part in a student film she’s making as it lead to one thing to another. Even as their individual lives is fraught with struggle as Matthias is in a relationship with a woman while Maxime is dealing with his abusive, alcoholic mother and preparing to leave. Though both men have different personalities, their friendship often brings the best in both of them yet this participation in this student film changes everything.

Dolan’s direction does have some element of style yet a lot of is straightforward in terms of its overall presentation as it is shot on location in areas at the province of Quebec and places near Montreal. While there are wide shots of these locations, including a lake where Matthias would swim in the morning after the night he and Maxime participated in the student film, where Dolan play into a world where the titular characters can thrive in. The usage of medium shots and close-ups would play into the different world of the titular characters where Matthias is often seen in a world with other people including his girlfriend Sarah (Marilyn Castonguay) and later an American friend in McAfee (Harris Dickinson). Maxime’s world has Dolan shoot him in different visual styles as it play into his shy persona as well as the troubled home life he has with his mother (Anne Dorval). These moments play into the film’s second act as it relates to the twelve days left before Maxime leaves for Australia as he and Matthias both cope with what happened on that night.

Also serving as the editor, Dolan would keep things straightforward in some of the edits while he would also use jump-cuts including some stylish cutting in a sequence for the film’s climatic going-away party scene for Maxime where Matthias and other friends attend. It would play into this world that they’re in yet Matthias is starting to also spend less time in due to the fact that he’s part of the corporate world as he has a hard time trying to balance both as well as his own thoughts on Maxime. Dolan, who also does the costume design with Pierre-Yves Gayraud, would also play up that sense of isolation in the two men in the way they dress as well as the struggle in figuring out what they are in the end. Overall, Dolan crafts a riveting and mesmerizing about two lifelong friends who deal with an act that they did that changes everything.

Cinematographer Andre Turpin does brilliant work with the film’s cinematography as it play into some of the natural and colorful elements in some of the suburban locations with the usage of natural lighting for scenes at the lake. Production designer Colombe Raby, with art director Claude Tremblay plus set decorators Genevieve Boivin, Pascale Deschenes, and Marzia Pellissier, does excellent work with the look of the lake house as well as the condo that Matthias lives in as well as the chaotic home Maxime’s mother lives in. Special effects makeup supervisor Erik Gosselin does nice work with the look of the right side of Maxime’s face that features a blotch as it play into his flawed look.

Special effects supervisor Mario Dumont and visual effects supervisor Jean-Francois Ferland do terrific work with some of the film’s special effects as it mainly features Matthias’ swim on the lake and a few bits of set-dressing. Sound designer Sylvain Brassard does superb work with the sound as it play into the way music sounds in a room or how a conversation is presented during a meeting Matthias has with his boss. The film’s music by Jean-Michel Blais is amazing for its somber piano score that features flourishes of classical elements while music supervisor Craig Gering provides an array of music that includes a classical piano piece by Franz Schubert as well as music from Britney Spears, the Pet Shop Boys, Amir Haddad, Alex Cameron and Angel Olsen, Phosphorescent, Boards of Canada, DYAN, Cass McCombs, Sister Rosetta Tharpe, George Fitzgerald and Lil Silva, Zola Jesus, the Get Up Kids, Half Moon Run, and Arcade Fire.

The film’s wonderful ensemble cast include some notable small roles from Camille Felton as the film student Ericka who asks the titular characters to appear in her student film, Harris Dickinson as an American friend of Matthias in McAfee, Anne Dorval as Maxime’s alcoholic mother, Micheline Bernard as a maternal figure for the titular character and their friends in Francine, Catherine Brunet as a friend of Maxime in Lisa, and Marilyn Castonguay as Matthias’ girlfriend Sarah who believes that something did happen that night and Matthias is not saying anything. Antoine Pilon and Adib Alkhalidey are fantastic in their respective roles as Brass and Shariff as two longtime friends of the titular characters who like to party and have fun while also knowing that the student film is bringing some revelations about the titular characters. Samuel Gauthier is superb as Frank as another friend of the two characters who is a party animal as he becomes concerned about the two during the film’s climatic party knowing that he does care despite his own wild antics. Pier-Luc Funk is excellent as Rivette as a young man who is another friend of the titular characters as he is also from a posh family that includes Ericka where he knows something is up between the two while also realizing it’s going to change things in their friendship.

Finally, there’s the duo of Gabriel D’Almeida Freitas and Xavier Dolan in incredible performances in their respective roles as the titular characters of Matthias and Maxime. Freitas’ performance is more restrained as someone who has all of the qualities of a man that is set to have it all as he’s also good looking but is struggling to deal with his own feelings for Maxime just as he’s about to get a major promotion. Dolan’s performance as Maxime is also a bit restrained except for scenes in the way his character interacts with his mother while he is also a bit more energetic at times despite his interactions with those he doesn’t know. Freitas and Dolan together do have this amazing chemistry in the way they talk with each other as well as play into this idea that they’ve been friends since childhood that lead to bigger things despite their different personalities.

Matthias & Maxime is a sensational film from Xavier Dolan that features great leading performances from Dolan and Gabriel D’Almeida Freitas. Along with its supporting cast, gorgeous visuals, study of lingering feelings and confusion, and a fun music soundtrack. The film definitely marks a newfound maturity in Dolan’s exploration of sexual identity and youth as well as the struggle to grow up further into adulthood. In the end, Matthias & Maxime is a phenomenal film from Xavier Dolan.

The only Dolan film I've seen is Mommy, which is an amazing piece of film. I need to see this.

@Wendell-Mommy is a great film though I think Laurence Anyways remains his best work as that film and this one here are both available on MUBI. There's also a Q&A bit that Dolan did after the screening of Matthias & Maxime as it really says a lot about his growth as a filmmaker. Especially as it was a vast improvement over his previous film which was shit.

@Brittani-I am so glad to pay that $80 year-long subscription for MUBI as it is worth having as this film is definitely a return to form after everything that was so wrong with The Death and Life of John F. Donovan while it is also a major step in his growth as a person and as a filmmaker. I really enjoyed this as this is one of many reasons to get MUBI. His next project is a miniseries.

We are watching this one today.

@Fred Rosa-Hope you enjoy it. It is way better than the last film he did and a much more mature feature.

I don't want to sound like an homophobic bastard but it was too gay for me. My wife did enjoy it. Check us out: www.cineit.blog

@Fred Rosa-There's nothing wrong with being too gay unless you're Billy Porter or playing to the worst stereotypes.