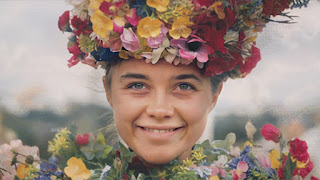 Written and directed by Ari Aster, Midsommar is the story of a couple who travel to Sweden for a midsummer festival in the hopes of repairing their relationship where they learn that it’s part of a big cult ritual. The film is an exploration of a couple trying to salvage their relationship unaware that the festival they’re attending is part of something bigger as it lead to all sorts of revelations and terror. Starring Florence Pugh, Jack Reynor, William Jackson Harper, Vilhelm Blomgren, Ellora Torchia, Archie Madekwe, and Will Poulter. Midsommar is a ravishing and terrifying film from Ari Aster.

The film is about a group of people who travel to Sweden for an event that happens every 90 years in which is part of a midsummer festival where a couple hope to repair their relationship following a young woman’s family tragedy. It is a film that explore these people who are attending an once-in-a-lifetime event that is filled with all sorts of intrigue as one of them is from that world as he invites his friends to this ceremony unaware of its intentions. Ari Aster’s screenplay is largely straightforward in its narrative and structure yet he also brings in a lot of complexities not just into these ceremonies at this event in the middle of Sweden but also the people attending this event as well as the inhabitants in the small and tranquil community that is cut off from the modern world. Even as they hold certain rituals that are dark and violent that is shocking to its outsiders who would all unknowingly play a role into this big midsummer event. The film opens in the U.S. during the winter where its protagonist Dani Ardor (Florence Pugh) is trying to reach her mentally-ill sister while calling her parents only to learn that her sister had killed them and herself in a murder-suicide event that left Dani traumatized.

Her boyfriend Christian Hughes (Jack Reynor) is spending time with her despite the fact that he’s thinking about breaking up with her as he is hoping to go to Sweden for this event for his anthropology studies where he would join fellow students Mark (Will Poulter) and Josh (William Jackson Harper) for the trip as they’re invited by their friend in the Swedish student Pelle (Vilhelm Blomgren) who is from this remote community. Dani joins in much to the reluctance of everyone except Pelle who wants to help her with her grief as they arrive at the rural area of Halsingland in this ceremony known as Harga as they meet a British couple in Simon and Connie (Archie Madekwe and Ellora Torchia, respectively) who are the few outsiders attending this event. Yet, things do become weird that involve certain psychedelics and such while Dani, Christian, and their friends witness these events that are considered shocking and violent as it leads to all sorts of trouble. Some would want to leave only to disappear mysteriously while revelations would occur during the event with Dani dealing with her relationship with Christian.

Aster’s direction is definitely mesmerizing in terms of not just his meticulous approach to framing and compositions but also the atmosphere he presents. With the scenes in the U.S. shot on location in Utah and Brooklyn, New York, much of the film is shot on location in Hungary with some of it shot on location in Sweden to play into the Scandinavian landscape as well as the fact that there’s barely any nighttime in this world that these characters are in. The first 20 minutes is set in the U.S. where Aster creates these tight compositions that do play into Dani’s own drama as well as a scene where her family are killed by her own sister along with this unique tracking shot of Dani walking into the bathroom of her own apartment and then being in a bathroom inside an airplane where she is having an emotional episode. When the film arrives in Sweden at this tranquil and open-spaced community, Aster’s direction definitely gets broader as it is shot largely during the day.

The usage of wide and medium shots add to the scope of the commune as it include houses and such where people live but also landscapes and such for certain ceremonies. Even in how Aster would create these careful framing and compositions such as a scene where Josh is trying to get a closer look into a book that relates to the ritual as he is shown in a close-up in one room and then it cuts to the same close-up but in another room. It is among these moments that play into Aster’s style but there are also these surreal moments such as a scene late in the second act where Dani takes part of a contest that would be crucial to the film’s third act. Even as it lead to revelations about her own tragedy as well as her own relationship with Christian who would go into his own personal journey that has him playing a key role in the third act. Notably as it play into this final ceremony as there is so much at stake with everyone playing a role with Dani being the most crucial as it follows her own journey from tragedy and heartache. Overall, Aster crafts an evocative yet eerie film about a group of college students including a young couple attending an once-in-a-lifetime event that is filled with dark rituals.

Cinematographer Pawel Pogorzelski does incredible work with the film’s cinematography with its emphasis on low-key lights for the scenes in the U.S. in its interior settings including at the house in Sweden while a lot of the exterior lighting in Sweden that is filled with vibrant colors that are heightened with some natural lighting in some scenes. Editor Lucian Johnston does excellent work with the editing as it has some stylish moments but also some straight cuts that help play into the suspense and drama. Production designer Henrik Svensson, with set decorators Klara Alfredson Jofs Svensson and Zsuzsanna Svertecki plus art directors Csaba Lodi, Richard T. Olson, Nille Svensson, and Eszter Takacs, does amazing work with the look of the houses at the commune as well as a few places and such that serve as a sense of importance to the commune. Costume designer Andrea Flesch does fantastic work with the costumes such as the white clothing for all of the people at the commune including the casual look from its visitors.

Hair supervisor Monika Toth and makeup supervisor Katalin Jakots, with prosthetics makeup designer Ivan Poharnok, does brilliant work with the look of a key character in the film as well as the design of some of the gory elements in the film. Special effects supervisor Gabor Kiszelly and visual effects supervisor Gergely Takacs do terrific work with the visual effects as it play into some of the psychedelics the visitors take as it adds a surreal element to the film. Sound designer Ruy Garcia and sound editor Gene Park do superb work with the sound as it help play into some of the natural elements of the location as well as other sounds that help add to the sense of horror in the film. The film’s music by Bobby Krlic is phenomenal for its haunting and eerie music score that relies largely on vocals and folk instrument that play into the sense of tradition in this ritual that these characters deal with while music supervisor Joe Rudge compiles a couple of songs such as a piece of music by Freez at a restaurant early in the film and Frankie Valli and the Four Seasons’ The Sun Ain’t Gonna Shine (Anymore) for the film’s final credits.

The casting by Jessica Kelly and Jeanette Klintberg is wonderful as it feature some notable small roles from Klaudia Csanyi as Dani’s troubled sister Terri, Zsolt Bojari and Gabriella Fon as Dani’s parents, Liv Mjones as a commune resident in Ulla, Hampus Hallberg as a young man in Ingemar who invited Simon and Connie, Mats Blomgren as an elder in Odd, Isabelle Grill as a red-headed young woman in Maja who takes a liking towards Christian, and Bjorn Andersen as an old man who plays a key role in one of the first rituals at the event. Archie Madekwe and Ellora Torchia are superb in their respective roles as the young British couple Simon and Connie as two people who are invited by Ingemar to this event unaware of what is going on as they would later disappear. Will Poulter is fantastic as Mark as a college student who is more interested in getting stoned and getting laid where he ends up rubbing some of the residents at the commune the wrong way.

William Jackson Harper is excellent as Josh as an African-American anthropology student who is hoping to learn more for his thesis only to be at odds with Christian over who should write the thesis as he is hoping to get all of this information into the outside world. Vilhelm Blomgren is brilliant as Pelle as a Swedish student who invites everyone to Sweden for this big event without stating their intentions while is also hoping to help Dani as he too endured his own family tragedy. Jack Reynor is amazing as Christian Hughes as Dani’s boyfriend and an anthropology student who is eager to go to Sweden for his studies but is also secretly hoping to break-up with Dani where he finds himself as an object of affection for a young woman at the commune unaware of the role he’s playing. Finally, there’s Florence Pugh in a phenomenal performance as Dani Ardor as an American psychology student troubled by family tragedy as she is unaware of Christian’s intentions where she travels to Sweden as a way to escape from her issues only to deal with a lot. It is a performance that showcases Pugh at her most vulnerable as well as someone that is trying to find some form of solace and a sense of belonging as it is a career-defining performance from Pugh.

Midsommar is a spectacular film from Ari Aster that features a great leading performance from Florence Pugh. Along with its supporting cast, gorgeous locations, ravishing visuals, themes of loss and trauma, and its eerie yet evocative music score. The film is truly an intoxicating yet haunting film that explore people attending this once-in-a-lifetime event that is filled with dark rituals and violence that play into a world that is disconnected with the modern world. In the end, Midsommar is a magnificent film from Ari Aster.

This is a hell of a good film, and one of those movies that sticks with you for a long time. It is justifiably thought of as an immediate classic in the genre.

It also is a near-perfect double-feature with the original Wicker Man.

I must watch this one.

I love this movie so much. it's on I've revisited plenty since it came out.

@SJHoneywell-I need to see the original Wicker Man as if it doesn't arrive in time for October. I'll consider it as a Blind Spot for next year.

@Brittani-This was fucking incredible. I need to see the extended director's cut of this film as I'm sure it's just as fucked up. I love Florence Pugh in this. She is definitely one of the best actresses working today.

My friends and I were just talking about Ari Aster's movies the other day, including this one and how it gave my friend nightmares. I don't think I have the stomach for it so I take your word for it that it's an excellent film.

@ruth-See these films. They're just phenomenal as it's not just the horror that is chilling but it also has a lot of emotional punches that work.