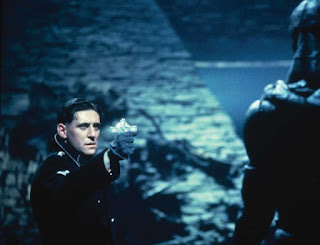 Based on the novel by F. Paul Wilson, The Keep is the story of a group of Nazi soldiers in 1941 Romania who enter an ancient fortress that possesses a mysterious entity that would eventually wreak havoc on everyone. Written for the screen and directed by Michael Mann, the film is a fantasy-horror film that explore this mysterious object that is filled with dark entities that would prove to be troubling for everyone. Starring Scott Glenn, Alberta Watson, Gabriel Byrne, Jurgen Prochnow, Robert Prosky, and Ian McKellan. The Keep is a fascinating but messy film from Michael Mann.

The film revolves around a mysterious fortress in 1941 Romania that the Nazis plan to use during the war where it is revealed that a mysterious entity has emerged within the fortress killing many where a Jewish professor, his daughter, a mysterious man, and other deal with this mysterious entity. It is a film that explore this entity inside a fortress in a small Romanian village near the Carpathian Mountains where the Nazis hoped to have control of the Dinu Pass. Michael Mann’s screenplay does showcase this air of conflict between two German officers in Captain Klaus Woermann (Jurgen Prochnow) and the more sadistic Nazi official Major Erich Kaempffer (Gabriel Byrne) as the former doesn’t want to bring any harm to the Romanian villagers but is also a much more humane individual than the latter who would arrive later following an incident in the fortress in which two soldiers tried to steal a metallic cross thinking it is silver and full of riches only to unleash the mysterious entity known as Radu Molasar (Michael Carter).

Captain Woermann turns to the local pastor Father Mihail Fonescu (Robert Prosky) for advice as Father Fonescu suggests getting the Jewish historian Theodore Cuza (Ian McKellan) who is at a concentration camp with his daughter Eva (Alberta Watson) as they’re retrieved despite Cuza’s ailing health while a mysterious man named Glaeken Trismegestus (Scott Glenn) arrives from Greece to deal with this entity. Mann does maintain this air of intrigue yet the fact that there’s so much going on and a lot of ambiguity into this entity doesn’t do much with the story though it is clear that there is a lot more that Mann wanted to say as it plays into the state of the world as well as the fortress itself as one of the first scenes in the film has Captain Woermann meet a man in Alexandru (W. Morgan Sheppard) who has been watching over the fortress as he made a warning towards Captain Woermann as he and his two adult sons are never seen again. It’s one of these things in the film that feels like it got cut out as there’s a lot of things that are unexplained in the film.

Mann’s direction is definitely stylish in terms of not just the vast scope he presents but also brings in this mixture of horror, drama, suspense, and war into one entire film. Shot partially on location at Llanberis in Wales as well as additional locations in Spain with much of the interiors of the fortress shot at Shepperton Studios near London. Mann definitely maintains some unique compositions including a lot of wide shots to get a look of some of the areas within this fortress that is filled with this air of death. Even in some of the exteriors where Mann uses some medium shots to get a look into the locations as well as the village where the Germans arrive with Captain Woermann wants to ensure civility. There are close-ups that do play into the drama and tension throughout the film yet the script doesn’t do enough to play into the suspense mainly due to the fact that the film was tampered with during post-production as there are scenes in the film that do feel longer as it has a lot more to say but got cut as some of the cutting feels awkward.

The scene where the two soldiers try to get this silver icon out of the wall that would lead to the chaos is a terrifying moment as is the reveal of Radu Molasar but there are elements in which Mann wanted to do so much more but it never goes all the way. Even as the presence of Molasar would loom over the village as Father Fonescu starts to act crazy where there is so much that feels like there is more to say. The film’s climax that involves Trismegestus and Molasar feels unfinished which lead to an abrupt ending of sorts as it does play like it was meant to be longer. Mann clearly wanted more to do but the result is something messy with so many questions into the stakes and the motivations of Molasar as it never is fully realized. Overall, Mann crafts a compelling but under-realized film about a group of people dealing with a mysterious entity at a Romanian fortress during World War II.

Cinematographer Alex Thomson does incredible work with the film’s cinematography as it is a highlight of the film with its usage of striking lighting for some of the interiors inside the fortress as well as some naturalistic looks for some of the daytime exterior scenes. Editor Dov Hoenig, with additional and un-credited work by Tony Palmer, does nice work with the editing as it has some moments to play into the suspense but the additional work from Palmer unfortunately has some jarring moments in the editing as it help play into the truncated tone of a film that felt longer. Production designer John Box, with set decorator Michael Seirton plus art directors Alan Tomkins and Herbert Westbrook, does amazing work with the look of the fortress including many of its interiors as well as the design of some of the interiors in village houses. Costume designer Anthony Mendleson does fantastic work with the costumes as it play into the period of the times including the Nazi uniforms that Major Kaempffer wears along with his own soldiers.

Makeup effects supervisor/prosthetics designer Nick Maley, with creature designer Enki Bilal, does excellent work with the look of some of the design of the corpses with Bilal creating the look of Molasar. Special effects supervisor Nick Allder, along with visual effects supervisors Robin Browne and Wally Veevers, does terrific work with some of the film’s visual effects as it play into the usage of practical effects and optical shots for some of the powers that Molasar has as well as the glowing eyes of Trismegestus. Sound editor William Trent, with re-recording mixer Doug Turner, does fine work with some of the sound in the way gunfire and other sound effects sound though there’s moments where the sound is muddled due to a lot of the chaos that went on during the film’s post-production. The film’s music by Tangerine Dream is phenomenal with its intoxicating electronic score that has elements of lush synthesizers with elements of guitars as it help play into the mood of the film as it is one of its major highlights.

The casting by Jeremy Zimmerman is superb as it feature some notable small roles and appearances from Frederick Warder and Bruce Payne as the two guards who tried to steal a silver icon that would unleash the terror that would haunt everyone, David Cardy and John Eastham as Alexandru’s sons who help him watch over the fortress, W. Morgan Sheppard as the fortress caretaker Alexandru whom Captain Woermann respects as he warns him about what is inside, and Michael Carter as the mysterious entity Radu Molasar who is this mysterious creature that is terrorizing everyone as it is a chilling performance though he is hampered by the film’s screenplay. Robert Prosky’s performance as Father Mihail Fonescu is an example of someone being miscast since Prosky doesn’t speak with a Romanian accent as he is someone who is trying to help Captain Woermann while dealing with some of the changes in Dr. Cuza’s behavior.

Ian McKellan is fantastic as Dr. Theodore Cuza as a Jewish professor who used to live in the village as he is taken from the concentration camp where he has an encounter with Molsar who cures his ailments as McKellan manages to even play into some over-the-top acting as a man trying not to get killed by the Nazis. Alberta Watson is good as Eva as Dr. Cuza’s daughter who is accompanying him as she is the lone female figure in the film who is seen by the Nazis as someone they can rape yet is also someone who is trying to understand what is going on as Watson has her moments in a role that is underwritten. Jurgen Prochnow is excellent as Captain Klaus Woermann as an infantry officer who reluctantly takes the assignment as he deals with the chaos involving the entity while also lamenting over Major Kaempffer’s sadistic tactics as he is a humane man that wants to protect the villagers and his soldiers from the chaos as well as questioning the ideas of the Nazis.

Gabriel Byrne’s performance as Major Erich Kaempffer as a Nazi officer who leads a band of commandos as he is a sadistic figure that spews Nazi rhetoric as it’s a role that is underwritten where Byrne doesn’t really get to do much but be an asshole. Finally, there’s Scott Glenn in a superb performance as Glaeken Trismegestus as a mysterious figure who seduces Eva while is also someone that is filled with a lot of ambiguity as Glenn is hampered by the script as it feels like there is more about him but is rushed because of the botch editing of the film though Glenn is able to bring in a performance is still intriguing.

The Keep is a good but extremely messy and flawed film from Michael Mann. While it has some incredible visuals from Alex Thomson as well as a great score by Tangerine Dream and some amazing set design. It is a film that feels like there is more to say in its original 210-minute cut that Mann had intended but instead the final version is at the 97-minute running time which feels more like a preview of something much darker. In the end, The Keep is a superb but undercooked film from Michael Mann.

"Good but messy" is a great way to describe this. For me, the shocking thing is just how accurate the age makeup on Ian McKellan is--they aged him in this movie to look like exactly what he looks like now.

@SJHoneywell-I know. I was like "does he ever age or was he always like this?" Still, he looks pretty damn good.