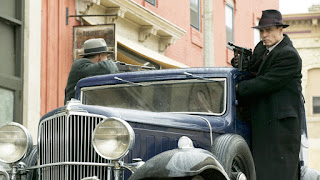 Based on the non-fiction novel Public Enemies: America’s Greatest Crime Wave and the Birth of the FBI, 1933-1934 by Bryan Burrough, Public Enemies is the story of the final year of bank robber John Dillinger that features his relationship with Billie Frechette as well as being pursued by FBI agent Melvin Purvis. Directed by Michael Mann and screenplay by Mann, Ronan Bennett, and Ann Biderman, the film is look into the final years of Dillinger’s life as well as the manhunt lead by Purvis as Dillinger is portrayed by Johnny Depp and Purvis is portrayed by Christian Bale. Also starring Marion Cotillard, Stephen Dorff, Channing Tatum, Jason Clarke, David Wenham, Lili Taylor, Giovanni Ribisi, Stephen Lang, and Billy Crudup J. Edgar Hoover. Public Enemies is a riveting and intense film from Michael Mann.

Set from 1933 to 1934 during the Great Depression, the film is about the final year of John Dillinger who was notorious for robbing banks as he is being pursued by Melvin Purvis upon the formation of the Federal Bureau of Investigation led by J. Edgar Hoover. It’s a film that explores what some considered to be the golden age of bank robberies with gangsters robbing places left and right with no one to challenge them until the formation of the FBI where Hoover hires Purvis to hunt Dillinger after Purvis had taken down another gangster in Pretty Boy Floyd (Channing Tatum). The film’s screenplay by Ronan Bennett, Ann Biderman, and Michael Mann has a unique structure where much of its first half is about Dillinger’s success in robbing banks but also not killing innocent people as he maintains a folklore persona for robbing banks and helping people in need.

It is also around this time he would meet Billie Frechette (Marion Cotillard) who would become his girlfriend as the relationship would be something Dillinger cherishes. Yet, Frechette would be the key to Purvis in trying to find Dillinger as the film’s second half is about Dillinger’s fall where he would get captured and later break out of prison only to learn that members of his gang are scattered with a few he can rely but also other gangsters who play by different rules. It would force Dillinger to rely more on Frechette and hide but also know that Purvis is determined to capture him and bring him to justice. It is a film that does play into a world that is changing where criminals used to have ideas and rules in what they have to do but power eventually becomes misused leading to people of power from the government to handle matters.

Mann’s direction is stylish in its approach to hand-held cameras to capture the action as well as shooting the film on high-definition digital video instead of the traditional 35mm where the look of the film has a crudeness in some of its movements and scenes where the camera shakes. It adds to its offbeat look where it gets a lot of detail in the visuals yet it does feel jarring at times as it is a step away from the norm expected in a gangster film. Shot on various locations in Columbus, Wisconsin as well as various towns in Illinois and Wisconsin along with parts of Chicago and Milwaukee. Along with actual locations where Dillinger did some of his robberies, Mann would maintain an air of grittiness to the visuals as well as use flares for scenes at night that play into the suspense and drama. Even as Mann would use wide shots not just in getting a scope of the locations but also in scenes where some of Purvis’ men are hiding to see where Dillinger could be as well as the scene early in the film where Purvis goes after Pretty Boy Floyd.

Mann’s usage of close-ups and medium shots also add to the drama and suspense where it does play into some of the situations that Dillinger and Purvis put themselves through as well as the exchanges they have with other characters. While there are some dramatic liberties in the film that relate to some of the people Dillinger meet like Baby Face Nelson (Stephen Graham) as well as when Pretty Boy Floyd was killed. Mann does use the rise-and-fall narrative of Dillinger that play into a man who is considered a folk hero yet just wants to have money and have a good time but is aware that time is running out for him. The film’s climax is all about the locations and geography where Mann takes great care into the events that would mark an end of an era for the world of the gangsters and the emergence of a new world order. Overall, Mann crafts a gripping and rapturous film about the final year in the life of John Dillinger and the manhunt led by Melvin Purvis.

Cinematographer Dante Spinotti does excellent work with the film’s cinematography in its approach to low-key lighting and the usage of available light to get a grittiness of the film though it does have that crude look expected from digital video that is jarring at times. Editors Paul Rubell and Jeffrey Ford do brilliant work with the editing with its usage of jump-cuts and other rhythmic cuts to play into the action and suspense. Production designer Nathan Crowley, with set decorator Rosemary Brandenburg plus art directors Patrick Lumb and William Ladd Skinner, does amazing work with the look of some of the places re-created including restaurants, houses, and other places the characters go to. Costume designer Colleen Atwood does fantastic work with the costumes from the stylish dresses that the women wore including Billie’s fur coat and the suits the men wore in those times.

Special effects supervisor Bruno Van Zeebroeck and visual effects supervisor Robert Stadd do terrific work with some of the special effects that relate to the action along with a few set-dressing pieces in the visual effects. Sound editors Laurent Kossayan and Jeremy Peirson do superb work with the sound as it play into the atmosphere of the locations as well as the sounds of gunfire and sirens that add to the suspense. The film’s music by Elliot Goldenthal is wonderful for its bombastic string arrangements that add to the drama and suspense to play into the grandeur of Purvis’ manhunt while music supervisors Bob Badami, Bruce Fowler, and Kathy Nelson create a soundtrack that features a lot of the music of the times ranging from jazz, blues, ragtime, and pop that would become standards of the time.

The casting by Avy Kaufman and Bonnie Timmermann is great as it feature some notable small roles from Matt Craven as FBI agent Gerry Campbell, Carey Mulligan as a young woman in Carol Slayman who provides Dillinger and his gang a hideout, Leelee Sobieski as Dillinger’s date Polly Hamilton on the night of his death, Branka Katic as another date of Dillinger in Anna Sage on that night, Emile de Ravin as a girlfriend of one of Dillinger’s friends, Bill Camp as the gangster Frank Nitti who refuses to help Dillinger during the second half to cover their bookkeeping scheme, John Ortiz and Domenick Lombardozzi as a couple of Nitti’s men, Giovanni Ribisi as a gangster in Alvin Karpis, Lili Taylor as Sheriff Lillian Holley whose prison would hold Dillinger for a while, David Wenham and Spencer Garrett as two of Dillinger’s men in their respective roles as Harry Pierpont and Tommy Carroll, and Michael Bentt as the prisoner Herbert Youngblood who helped Dillinger break out of prison during the second half.

Jason Clarke and Stephen Dorff are terrific in their respective roles as Red Hamilton and Homer Van Meter as a couple of Dillinger’s associates who are among his closest allies with Clarke being the closest of the two who helps him escape and handle small matters while Dorff is the getaway driver who also knows what not to do. Stephen Graham is superb as Baby Face Nelson as a gangster who is violent and unruly as he is the kind of person Dillinger is reluctant to associate himself with while Channing Tatum is fantastic in his brief one-scene performance as Pretty Boy Floyd as a young gangster who gets gunned down by Purvis. Stephen Lang is excellent as the Texas Ranger Charles Winstead as the man who would kill Dillinger as he is also someone that is a man of principle and honor where he helps Purvis in pursuing Dillinger. Billy Crudup is brilliant as J. Edgar Hoover as Dillinger’s supervisor who is the public face of the FBI whom he’s just started as he ensures America that the world of crime will end.

Marion Cotillard is incredible as Billie Frechette as the woman who would be the love of Dillinger’s life in his final year as she would learn about who he is and would help him while unknowingly be used as bait to get him where it’s a performance that has Cotillard display a toughness as well as gracefulness that isn’t expected in characters that play a certain type. Christian Bale is marvelous as Melvin Purvis as a FBI agent who is tasked to pursue Dillinger with different methods as he is a cunning and cautious man that just wants to put Dillinger behind bars but is also someone that wants to do what is right where he later finds himself not agreeing with Hoover’s ideals. Finally, there’s Johnny Depp in a phenomenal performance as John Dillinger as the famed bank robber who likes to steal money and live a good life but is also someone that doesn’t kill unless it is necessary as it’s a low-key yet charismatic performance from Depp who displays charm as well as a melancholia as it relates to Dillinger’s fall.

Public Enemies is a remarkable film from Michael Mann that features great performances from Johnny Depp, Christian Bale, and Marion Cotillard. Along with its ensemble cast, high-octane action, gritty presentation, and sumptuous music soundtrack, it’s a film is intense while play into the thrill of a period in time that was dangerous. Though its presentation is flawed due to the jarring visuals in the high-definition digital, it is still a film expected from Mann in its approach to showcasing the world of the gangsters during the Great Depression. In the end, Public Enemies is an awesome film from Michael Mann.

I have to admit that I didn't immediately warm up to this film initially. Like many, I was expecting a period-era version of HEAT but it isn't that. It's really all about Dillinger whereas the book it was based on was about that entire period and all the gangsters that thrived during it. Marion Cotillard really wowed me in this one. I think I had only seen her in INCEPTION but she was very sympathetic in this one. Bale was also excellent even though he wasn't given a lot to do.

What did you think of the controversial decision to shoot a period film digitally?

@J.D.-Marion is great in this as I have yet to see her do a bad performance. As for the digital question, I don't mind the idea of using digital if its to capture something realistic yet I found it jarring in this film as I felt it was wrong for the time period as it was probably much richer in its look and in the lighting.