Originally Written and Posted at Epinions.com on 11/29/02 w/ Additional Edits. 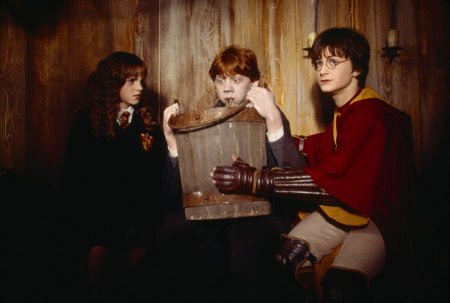 When Harry Potter & the Sorcerer's Stone came out in the fall of 2001, the Harry Potter film franchise officially begins with a bang.  Excellent reviews and huge box office exceeded expectations.  The film also gave attention to its young cast in Daniel Radcliffe, Rupert Grint, and Emma Watson as they all became stars.  While Chris Columbus succeeded with the first film, he was already getting ready to start work on the second film of the seven-part film series where Harry explores a dark chamber with a creature that is attack Muggle-born students called Harry Potter & the Chamber of Secrets.

In The Chamber of Secrets, the film picks up where it’s left off as Harry now lives in a room (instead of a closet in the previous film) in the Dursley’s home but Uncle Vernon (Richard Griffiths), Aunt Petunia (Fiona Shaw), and cousin Dudley (Harry Melling) still treat him like an outsider, especially in a deal for Vernon where Harry is forced to be in the room pretending he doesn’t exist. Harry ponders why his friends haven’t send him any letters until he learned that a slave elf (a CGI-creation voiced by Toby Jones) named Dobby who tells Harry not to return to Hogwarts because of some terrible danger behind the school. Harry wants to return to Hogwarts but Dobby gets him in trouble with Dursleys that forced Uncle Vernon to put bars in Harry’s window. Later that night, Harry gets an unexpected visit from a floating car driven none other than his best friend Ron and his brothers Fred & George Weasley (James & Oliver Phelps) where they break the bars of the window as Harry packs his clothes and his pet owl Hedwig as they escape the Dursleys.

Harry arrives at the Weasley home where he meets with elder brother Percy (Chris Rankin), little sister and first-year Hogwarts student Ginny (Bonnie Wright), and the parents, Arthur and Molly Weasley (Mark Williams and Julie Walters). There, Harry and the Weasley clan take another way to Diagon Alley but Harry gets a first sign of trouble as he says the magic words and lands him at the wrong side of the town. After catching up with Weasleys, he meets up with friend Hermione as the gang goes to the bookstore to buy some books. There, they meet a popular and pompous wizard named Gilderoy Lockhart (Kenneth Branagh) who is adored by many female wizards and students, particularly Mrs. Weasley and Hermione but disgusted by all the male students who thinks he’s an egotistical wizard. Lockhart sees Harry and uses him to help boost sales of his recent book by taking a photograph with him. Harry wasn’t very pleased taking a picture with Lockhart and he then runs into his nemesis Draco Malfoy. Accompanying Draco is his father Lucius Malfoy (Jason Issacs) who seems to enjoy belittling Harry as well as the Weasleys since he always considered them a weak clan of wizards particularly Mr. Weasley. Lucius also takes shot at Hermione because her parents are Muggles (non-magic folk) and she isn’t a pureblood wizard like the Weasleys, Potter, or the Malfoys.

After the confrontation with Malfoys, Harry and the Weasleys enter the secret wall through the Hogwarts Express train where Harry’s feeling that something in Hogwarts that didn’t want him came back as he couldn’t get through the secret wall, thus leaving him and Ron to miss the train. Ron and Harry decides to take the Weasleys floating car to catch up with Hogwarts train but they have trouble along when the train is behind them and as they arrive at Hogwarts, they encounter a big tree that damages the Weasleys’ car and Ron’s magic wand. The duo gets an unwelcoming reception from Snape who had a paper of the floating car that was seen by some Muggles and wanted them to be expelled but since they don’t live in the Slytherin house that he runs, he couldn’t do anything since they live in the Gryffindor house run by McGonagall who decides to give the two detention.

School goes underway for the second-year students of Hogwarts as Herbology professor Sprout (Miriam Margoyles) teaches them to pull exotic plants that reveal screaming roots. Harry then meets up with Gryffindorff team captain Oliver Wood (Sean Biggerstaff) for team practice of the next Quidditch game with the rival team Slytherin where they learn that the Slytherin team has a practice spot as well with a new seeker, Draco. Thus begins one of several battles between Potter and Malfoy and believe me; those two don’t like each other. Even when Draco calls Hermione a “mudblood” that leads to Ron to try and curse Draco with a spell that backfired due to his damaged wand. They go to Hagrid for help where he tells them that the Malfoys were always a bad clan because they think they’re better than everyone and don’t like non-, pureblood wizards at Hogwarts. Harry meanwhile, is starting to feel something strange has arose as voices started to talk in his head and he sees a message written in blood about the Chamber of Secrets being opened and Finch’s cat who looked like she’d been hang but was petrified by some evil force.

Harry is suspected of wrongdoing but Hermione and Ron along with some of the professors don’t think so. The Hogwarts staff picks Lockhart for some investigation surrounding the Chamber of Secrets while he becomes the new teacher for the Defense Against the Dark Arts. Lockhart and his ego comes in with a painting of himself painting him as he teaches the students how to stop tiny, little elves but has problems until Hermione stops them with a spell that begins the suspicion for Ron and Harry about Lockhart’s credibility. Harry then goes into a Quidditch match against Slytherin where he goes head-to-head with Draco over the Golden Snitch but he is followed by a ball that seems to go after him. After the match, the ball is trying to kill as Hermione stops it that leads to Lockhart trying to repair Harry’s arm but left again, Lockhart’s credibility comes in question as Harry’s arm isn’t repaired.

More eerie messages and voices come for Harry as he, Ron, and Hermione begin to read about the Chamber of Secrets. The Chamber was created by Slytherin as a way for him to create more spells but was rejected by the other founders of Hogwarts School. The chamber could be open by an heir of Slytherin, which made the trio suspect the Malfoys that could be the heirs. In order to get something from Draco, they decided to make a potion in an abandoned section of the girl’s bathroom haunted by a ghost named Moaning Myrtle (Shirley Henderson). More students hit with the same spell Finch’s cat got were sent to the hospital that were later followed by a trail of small spiders coming out after the students were petrified as Lockhart decided to create a lesson where students can defend themselves with their wands. Helping Lockhart was Snape who again made Harry and Ron question whether Lockhart is really the great wizard he claims to be. There, another battle between Harry and Draco comes in that forced Lockhart to make some spell that turned out to be the wrong one as a snake comes in and scares the students until Harry speaks to the snake in a secret language that made Harry to question if he’s the real heir of Slytherin.

Then the film takes a dark turn as Harry discovers about a story of the Chamber being opened by Tom Riddle (Christian Coulson) that led to the death of a non-pureblood student fifty years ago and learned that all the victims of the spell were non-pureblood that spells trouble for Hermione. Harry and Ron discover more about the Chamber and learn some horrible stories surrounding close colleagues, spiders, and snakes. There, they have to discover what’s behind the Chamber of Secrets or else Hogwarts School will be closed for good as Potter.

The Chamber of Secrets is definitely a much darker and more intense film than the first. With its plot twists and simplistic storytelling, it’s an enjoyable film from start to finish. The action scenes in the movie, particularly the Quidditch match is more fun than ever. The performances from the young actors are more relaxed as each of them get more in touch with their characters while the additions of Margoyles and Branagh are refreshing and add more humor to the film while Jason Issacs does an excellent job as the malicious Lucius Malfoy. The rest of the supporting cast, although their roles were brief, were very excellent including Richard Harris in his final film performance (shortly before the film was completed) that served as an example of his great talent

Steve Kloves' script does dwell into some of the darker territory that would set the course for the film as it takes in what is needed for the story to move forward.  Chris Columbus' direction however, isn't as wondrous in comparison to the first film as it's mostly by-the-book in what is expected for a fantasy/adventure film.  Even as he approaches some of the darker aspects of the story by just making it adventurous and intense but not exactly getting his hands dirty.  Despite that cautious approach, Columbus does succeed in maintaining that world of Harry Potter and presenting the story in a faithful manner.

Overall, Harry Potter & The Chamber of Secrets is an excellent sequel that doesn't exactly surpass its predecessor.  Though it's so far, the weakest of the film series, it does contain some memorable performances from its young cast including one-timer Kenneth Branagh and then-series newcomer Jason Issacs.  While it's definitely an entertaining film, it's one that doesn't go far into the dark tone that would come yet it is still a worthy film of the series.  In the end, Harry Potter & the Chamber of Secrets is a solid film for the franchise.

All the problems I had with this film stem from my issues with the book. I found Chamber of Secrets to be the weakest story in the entire series. Most of it felt like Rowlings was just recycling material from the first film/book. This is most evident when you compare the differences between the second film/book and the vastly superior third book/film.

I try not to compare the book to the film. Though when you compare the novel version of Chamber of Secrets to the others. I guess I kind of have to agree with you. Though my least favorite is The Sorcerer's Stone in terms of all of the books but that book will beat the shit out of any mediocre book out there.

My main problem with the film version of Chamber of Secrets is more to do with Columbus' direction. He's not a bad director. I do like his work with the Home Alone films, Mrs. Doubtfire, and Nine Months despite that reach the line of sentimentality. It's just that he's not a director that can tackle heavy, dark themes.