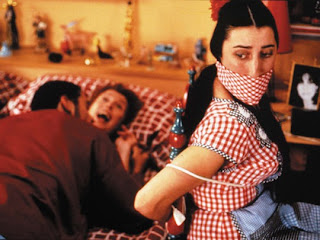 After 1988's international breakthrough for Mujeres al Borde de un Ataque de Nervios (Women on the Verge of a Nervous Breakdown), Spanish auteur Pedro Almodovar has finally achieved the international attention he had sought for. After the film's success, Almodovar moved forward where he fell-out with longtime collaborator and actress Carmen Maura and worked with another up-and-coming young actress in Victoria Abril. Their first collaboration was 1990's highly controversial !Atame! (Tie Me Up! Tie Me Down!) that also starred Antonio Banderas in his last collaboration with the director for more than 20 years. The film received mixed reviews as his 1991 follow-up Tacones Lejanos (High Heels) with Abril that showed Almodovar experimenting with genres. In 1993, Almodovar teamed Abril again for their third and final collaboration with a media satire entitled Kika.

Written and directed by Almodovar, Kika tells the story of a makeup artist whose misadventures are followed by a TV news reporter for sensationalism. One of those misadventures involves the young woman's relationship with an expatriated American writer and his step-son as controversy arises. A critique over media sensationalism and such, Almodovar reveals his unique brand of humor and satire. Also starring Peter Coyote, Alex Casanovas, Rossy de Palma, Almodovar's mother Francisca Caballero, and Veronica Forque as the title character. Kika is a funny, whimsical comedy from Pedro Almodovar.

Ramon (Alex Casanovas) is a lingerie photographer who is moody at times, while would have near-fatal heart attacks in moments of shock. Upon returning home, Ramon has learned his mother (Charo Lopez) has killed herself with his American stepfather Nicholas (Peter Coyote) wounded by a gunshot in his arm. A year later, despondent over his mother's death, Ramon dies as Nicholas calls an aloof, naive make-up artist named Kika to help with the makeup on Ramon. All of a sudden, Ramon is woken up as he falls for Kika. Two years later, Ramon and Kika are officially a couple as Ramon hopes to sell his late mother's home with the help of Nicholas who had just arrived from a trip. Living with Kika's maid Juana (Rossy de Palma), Nicholas lived upstairs in the apartment building that the two live while Ramon moves downstairs with Kika.

Ramon's former psychiatrist Andrea (Victoria Abril) is now a TV host for a sensational show on violence and other acts while she wears extravagant clothing by Jean-Paul Gaultier. One of the reports involved a porno star named Paul Bazzo (Santiago Lajusticia), who is mentally ill and has just escaped from jail. Learning that Ramon is learning is selling his mother's home, Andrea talks to Nicholas about renting it for her show as Ramon learns of Andrea's appearance and is upset about it. Andrea sets Nicholas up on a date with a Mexican woman (Bibi Andersen) while he's having a secret affair with Kika and her friend Amparo (Anabel Alonso). Though Kika loves Ramon, she is struggling with the failing affair with Nicholas. Even as suspicion arises over the death of his wife and such. Nicholas' blind date hasn't gone well as Andrea wonders what happened.

Juana, who watches Andreas' show, receives an unlikely visit from Paul Bazzo who is hoping to steal things from Kika's home. After tying up Juana and knocking her unconscious, he finds Kika asleep. Suddenly, a rape ensues as it's caught by a voyeur who calls a couple of clumsy policemen. The policemen don't really help things out as they try to pull Paul away from Kika. Arriving onto the scene wearing her camera-costume is Andrea as all hell breaks loose. Andrea wants to do an interview with Kika over what happened as she is publicly humiliated. Even when Andrea shows footage of the rape from the anonymous voyeur. Ramon learned what happened as more revelations over the incident happened. Angry over Ramon's lack of usefulness and Nicholas' philandering, Kika and Juana leave the apartment.

Andrea meanwhile, wants to contact Nicholas as she learns something about him with footage uncovered from his date with the Mexican woman. Truths come out in which, Kika finds herself in the middle of mystery gone horribly wrong.

Given the idea of media sensationalism in the early 90s, Almodovar definitely revealed a lot of the exploitive nature of sensationalism from the hand-held cameras that show incidents and such in order to gain ratings. Yet, that's not what the film is about. What Almodovar is saying is that the film is about a woman who finds herself in the middle of sensational world of media whether it's TV in the form of Andrea or literature in the form of Nicholas. There's these two people in Andrea and Nicholas who are willing to do anything to create some attention whether to gain ratings or sell books, respectively. There's definitely a cynicism and anger Almodovar has towards these types of media while the person who is always the victim is the one who is used for any type of creativity.

While Almodovar's script and direction is filled with a lot of humor and whimsical scenes, even the rape scene is done with a lot of humor. Yet, shock is what Almodovar goes for. What doesn't work is that the script does feel uneven in its bending of genres whether it's comedy, drama, or mystery. The film, towards the end, even goes to the point where it acts like a crime film. The script plus, Almodovar's direction kind of fails in what type of film it wants to be. Still, it's humor and shock does make it the type of film that is expected from Almodovar.

Cinematographer Alfredo Mayo creates some wonderfully, colorful images in the film. Especially on the location of Madrid and parts of Spain while the video-camera work is pretty grainy to emphasis the look of sensationalism. Set decorators Alain Bainee and Javier Fernandez create wonderful look to the film's colorful sets like the apartment of Ramon and some of the night sets of Madrid. Costume designer Jose Maria De Cossio creates some wonderful, elaborate costumes for some of the film's cast that includes some additional work from the late Gianni Versace. One of the greatest highlights of the costumes are the clothes Jean-Paul Gaultier made for Victoria Abril that are extravagant and over-the-top. Longtime editor Jose Salcedo does some fine editing although it falters at first in the film's first act due to pacing issues.

The cast features some memorable small performances from Bibi Andersen, Charo Lopez, Anabel Alonso, and Pedro Almodovar's mother Francisca Caballero as a TV host whose failed eyesight causes problems during an interview with Nicholas. Jesus Bonilla and Karra Elejade are good as the clumsy, lazy policeman who find themselves a bit overwhelmed during an act of crime. Santiago Lajusticia is excellent as the mentally-ill, porno star Paul Bazzo who hides a secret while committing an act of rape due to his time in jail. Rossy de Palma is good as Kika's loyal maid Juana who hides her own secrets and reasons into why she's a lesbian. Alex Casanovas is wonderful as the melancholic Ramon, who still mourns the death of his mother, while having a strange thing for photographing himself and Kika having sex. It's a fine performance from the young actor.

American actor Peter Coyote is good in his role as Nicholas though his voice is largely dubbed by another Spanish actor. Coyote definitely brings a complex, shady performance as a writer who finds himself short on money and having to do TV writing work for Andrea. It's a fine yet flawed performance from the actor. Victoria Abril gives a hilarious performance as Andrea Scarface, a TV reporter who is willing to go into any lengths to get her story. Even if she has to wear a robotic-like equipment with lights for a bra and a camera on her head. It's a hilarious performance from the Spanish superstar. Veronica Forque is pretty funny as the naive, aloof titular character of Kika. Forque's performance is winning with a charming, kooky personality that is a joy to watch though she is dumb. Yet, Forque makes the audience care for her in the struggles she goes through.

While it's nowhere near the brilliance of earlier films like Mujeres al Borde de un Ataque de Nervios or recent classics like Todo Sobre Mi Madre, Hable con Ella, and 2006's Volver. Kika is still an entertaining and fun film from Pedro Almodovar. Despite a wonderful cast, colorful images and sets, flashy costumes, and a great soundtrack. It's a film that represents Almodovar in style over substance. Fans of the director will might consider this as minor work though it does have it's moment. The film is still Almodovar in his extravagance. In the end, Kika despite its flaws is a joy to watch.

Pedro Almodovar Films: Pepi, Luci, Bom - Labyrinth of Passion - Dark Habits - What Have I Done to Deserve This? - Matador - Law of Desire - Women on the Verge of a Nervous Breakdown - Tie Me Up! Tie Me Down! - High Heels - The Flower of My Secret - Live Flesh - All About My Mother - Talk to Her - Bad Education - Volver - Broken Embraces - The Skin I Live In - I'm So Excited! - Julieta - Pain & Glory - (The Human Voice (2020 short film)) - (Parallel Mothers)